So before you say anything…yes I know this is a trending subject on YouTube and no I’m not following the crowd – just bringing something new to the site. There may be a few possible plans for other writers of the site to explain what they have on their phones too.

As far as the daily driver goes I’m currently using a HTC One M8. Yes I know it’s a 2-year-old phone but it did get an upgrade to Marshmallow a few months back and considering that hardware, still keeps up with all the modern apps with no problem what so ever. Plus it only cost me £120 back in May of last year, it makes it kinda of hard to spend any money on anything else. Why change something that ain’t broke. So the specs on it are still pretty good. It has:

As you will agree not too badly speced.

I’ll start with the lock screen. Just standard HTC Sense 7.0, nothing fancy. The 4 apps which I have quick and easy access to are Hangouts, Facebook, Spotify and the stock HTC camera app. So why these apps? Simplicity is the answer. Hangouts because I hate the stock SMS app. There are occasions where I will use hangouts for hangouts messages, not to mention that it is also pre-installed. Facebook, well I’m not really sure. Sure I use Facebook from time to time but it has been sat in my dock/lockscreen since about 2010 so why change it now. Spotify…well that takes no explaining really. Considering I’m on an unlimited data plan on Three, streaming sure beats downloading songs and putting them on a micro SD card.

Talking on my unlimited data plan I’m on the All in one 20 add-on with Three. If you want to grab this plan, then click here and it’ll take you to Three’s PAYG page, where you’ll be able to grab a SIM for yourself.

So getting back to the lockscreen, last app the stock camera app. For the longest time I was using the Google Camera app but I couldn’t find the option to save the photos to the SD card, so I was kinda forced to switch back to stock app so that I could store the photos to an SD card. It’s not a bad app really. Sure it looks likes it a bit cluttered but once you’ve spent a short time flicking through the menus its quite easy to get grasp of it all.

Unlocking the device you’re greeted with a fairly basic set up. My launcher is Action Launcher 3 paired with the Moko icon pack. The widget you see is Dashclock with the following extensions:

A simple set a extensions which when combined work very well together. One thing to note, when I have no unread email the counter disappears which is nice.

Swiping to the right you’ll find a widget from the Today Calendar. For the longest amount of time I used Sunrise Calendar but since Sunrise pulled the plug after the Microsoft acquisition, the app started to play up so I went in pursuit of a replacement. Under the widget you’ll find Fenix, a folder labeled MTT, Google Keep, Pocket Casts and the Google Authentication app. So lets break it down.

I used the stock Twitter app for the longest time because I’m too tight to actually pay for a replacement Twitter client and all the free alternatives are what I like to call terrible. But I have gained some Google Play Credit so I decided to give Fenix a go. Boy am I impressed. Plenty of customization and great little features allowing you to make it a little more personal to you. Opening the MTT folder you’ll find Slack, Trello, Gmail and Google Drive. Basically these are all the apps that we use to help us all keep in sync. Slack for all of our messaging, Trello to keep track of all the reviews and editorials. Gmail for all of the email communications and Drive since we have a folder share which allows us keep all the necessary files in one place. Google Keep to keep all my notes and reminders. Pocket Casts for all of my podcast listening needs. Finally the Authentication app for managing all my accounts that have two factor authentication set up, which is quite a few. Sure I could get the codes sent to me by SMS but I find having the codes in one app automatically update in one place.

I should probably mention where I got my got my wallpaper from. Well I sourced it from a friend of mine who happens to be an artist and this particular image is the end result of a speed paint video. Which you can find the video by clicking here. You can also get the image from here. If you do pop over to her Facebook tell her Chris Wallace sent you.

So that’s my lockscreen and homescreens explained. So it just leaves my app draw. Rather than explaining each app I’ll insert a screenshot of each page and explain some of the lesser known apps.

So on the first page there isn’t really anything that isn’t well known. Though I’ll highlight Brave. Brave is the new version of Link Bubble after Chris Lacy sold it back in August 2015. It still works brilliantly well. The new owners have a lot of standards to keep up, so far they’re doing well.

Moving to second page there is once again some pretty common apps. Highlighting FilmOn Live TV, it does what it says on the tin if I’m being honest. It allows you to watch TV live, streamed over the internet. Now not only does it give you a variety of UK live TV you’ll find channels from France, Germany, Russia, India, Italy, Middle East and many more. There are different subscription options but the free option allows you to stream all the programs in standard definition making it an absolute steal. Did I mention there is an app on virtually every platform. Android, iOS, Windows may more.
Sat in the middle of my app draw you’ll find all standard apps. I’ll mention is Opera Max. It’s a VPN which compresses all your incoming data. A great use case for this is if you have a low amount of data on your plan. A simple yet very effective tool and was one that I used a lot when I was on Vodafone with 500MB of data. Podcast app of choice Pocket Casts. Just a simple looking, simple to use podcast catcher. Did I mention it looks nice.
So on this screen I’m going to pull out three apps. Promo Codes, Screener and Sure. So Promo codes is a simple that allows you to check every 12 hours you get the chance to win a paid app for free or the in app purchase. Screener allows to make a clean show case of your homescreen. Take a screenshot, open the app, select you device, add the screenshot and you have a prettier way of displaying your homescreen rather than just simply showing the screenshot. Simple yet effective. Finally Sure is an app which allows me to use the IR blaster that the M8 has to control virtually anything with a IR receiver. Another app that is simple but effective. Though the design is not the best.
Moving on to last page yet again its filled with pretty standard apps. Though I will mention Three in Touch and Twitter on wear. Three in Touch is a simple app that when activated allows you to make phone calls and texts over WiFi. Yes it does replace your SMS and phone app but it works amazing well. Simple and effective though the design needs updating but hey ho. Twitter on wear is probably one of my favorite apps for Android Wear. It allows you to access your Twitter timeline from you watch. It also allows you to retweet and favorite tweets all without using your phone. Sure reading tweets on you watch is a bit of an odd thing to do and sure people have asked me what the hell I was doing and saying checking Twitter on my watch did baffle them at first but after showing them they actually thought it was pretty cool. Did I mention its free. 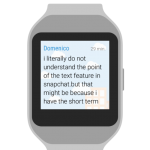