I continue the series where we look at what each of the biggest UK mobile networks have to offer. This time it’s Vodafone that we are going to be taking a look at.

I believe this if the first time in the series where we are going to be looking at a “real” . The first two, both giffgaff and Virgin, were both MVNO’ (where they rent space on someone else’s mast). Vodafone is the real deal in that they own their own masts so when you go with them, you are using them and their equipment from the bottom to the top. Vodafone should be pretty good at it too as they have been around practically forever. They go right back to the dawn of mobile coms being founded in 1991. Back to the days where analogue mobile phones where people with the right radios could tune into other people’s phone calls. Starting out in the UK for a long time Vodafone was one of the best run companies in the world and had experienced explosive growth pulling off some e corporate world moves that were marvels. The Vodafone take over of Mannesmann was a move of such incredible “ballsyness”; it meant for a brief time, Vodafone in the UK owned not only itself (which I think was the largest UK network) and it owned the global networks of the Orange brand. naturally it was forced to sell on Orange. 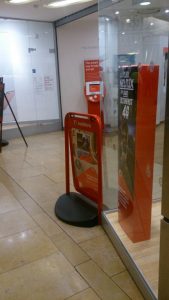 Okay, I realise many of you don’t care what they once did and how they got to where they are, but the idea that Vodafone is a company that had massive drive should be one to keep in mind. It was there at the start and was for a long time the largest network in the UK. However it isn’t the same anymore; it decided some time ago that subscriber numbers were not important, what mattered was profitability and as such it positioned itself as a “premium” network. Yes they are more expensive than the others but they were worth it.

Being of a certain age, Vodafone also was around back when the government licensed the original GSM bands. 900 MHz, that means that the old 2G network of Vodafone’s mostly exists on that band and being low means it gets good country side coverage and more importantly, good building penetration. (they also have a sliver of 1800 MHz but its fine to basically ignore.) 3G being all 2100 MHz as we know sucked for building penetration, but Vodafone has been allowed by OFCOM to “reform” that old 2G 900 MHz band to some 3G as well. Then with the latest 4G band sale Veda picked up a bunch of spectrum at 800 MHz and at 2600 MHz so Vodafone should be well placed to give you good countryside coverage, good city building penetration and, AND give you good data capacity with that 2600 MHz, so on paper Vodafone’s looks great network wise right?

Vodafone of course offers a variety of ways for you to give them money. The standard, contract with a phone, PAYG and the newer “SIM only” style. Which is best for you greatly depends on what you do with a phone and to an extent the size of your wallet too. lets now take a look at each style in turn and see what Vodaphone will currently offer you.

Traditional contract’s, without question the most complicated form of getting mobile phone connectivity. You naturally pay more for the size of the package of minutes, texts and data you get but also a chunk of what you pay goes towards paying for that “free” handset that the contract came with. Vodafone display on the their website a list of monthly packages with a price tag and list x number of phones available with that plan. I am not a fan of this model as it’s always complicated and the aim is to sell you a bigger bundle than you need to get you that “free” phone. Picking one from the 75 different option, yes 75 options. Err no. okay lets fin one that matches one of their “SIM only” plans. Since im a big data user lots look at the biggest. 20GB, unlimited calls and texts. The range from £65 to £42 for a 24 month contract or you can get a 12 month version for £70 per month. Each one then offers a range of handsets varying from “free” to some price dependant on the contract selected. If it sounds complicated that’s because it is. They are intended to part you from your wallet and not to be helpful.

The newer “SIM only” type of plans I am a big fan off. You get better value and it doesn’t hide the cost the handset you use, you can also buy whatever handset you like and “upgrade” it whenever you feel like it. that could be every 6 months or every 6 years. Vodafone’s SIM only come in two forms, 12 month contract or 30 day rolling contract, i.e. you pay monthly like normal but your free to leave at the end of each monthly billing cycle. For accounting reasons mostly networks would prefer you to sign a 12 month contract so you get often a nice discount compared with the 30 day, however after your 12 months you are effectively on the same 30 day cycle as your “out of contract.”

Prices range from £9.50 a month for which you get 250 minutes, unlimited texts and 250 MB of data. Eek!!! I can’t imagine surviving on just 250 mb a month, hell I break that in a day. Shifting up a bit £15.30 (don’t ask why the weird number) gets you unlimited calls, unlimited texts and 2GB of data, which is looking much more usable to me. skipping to the top you can get for £30, unlimited calls and texts and a sizeable 20GB of data. They als throw in a “free” subscription to something. If you want only 30 day the biggest plan is £29 for unlimited calls and texts but just 6GB of data. Those 12 month ones are looking pretty good value right? Then you compare it to the with a phone versions and you can see just how much that “free” phone is costing you per month.

Lastly we have PAYG. The nice, simple you pre-pay the network and your usage then diminishes the credit balance they hold for you. Simple right? Wrong. While you can just pay for things as you use it the networks love to bundle things together and want you to buy said bundles. Granted if you use them entirely they offer greatly increased value. Vodafone have the big bundle, £10 for unlimited texts, 150 min and 500MB of data. Which is not bad really. The catch is that like a contract that for 30 days and at the end of that anything left evaporates. Their other bundles all offer less for the same price so I suggest you ignore them. With one exception. They offer an “iPad sim” where you can bundle 1GB of data for £10.

Looking at the coverage as we all know offers as much truth as the words of a politician at election time. They generally bare zero correlation to reality so I can only speak to where I have tried it. your mileage may vary considerably. In short, their 2G coverage is great. That’s calls, texts and “data” . The data will work but its slow so it’s fine for WhatsApp or email but don’t think you’ll be Facebook browsing. Still, if you roam the countryside in a car that might break down Vodafone is a good option. 3G, so calls and pretty usable data. Well its no secret that Vodafone’s 3G network wasn’t very good, it’s not likely it ever will be as spectrum usage means 4G will be better in every way. 4G, they are still rolling it out but I have found in Edinburgh at least, it’s good. In theory, it should rapidly overtake 3G coverage and with that 800 MHz spectrum in use city penetration and country side space alike, we should see significant improvements over 3G.

Vodafone, the big granddaddy of mobile telecoms. Is it perfect, no sadly it’s not. In terms of its network abilities its near the beginning of a burst of improvements that we are yet to full see the benefits of 4G and its spectrum holdings which means that it should give up 2G like coverage but also bring us lightning fast data. It will also mean much higher call quality. That VoLTE is coming means that with the network set up for all IP means that their new fancy Call+ app, it lets you make calls and text using a Wi-Fi data connection. (For when you don’t have network coverage but you do have WiFi.) there are improvements that should work or dramatic improvements.

In terms of cost however, I’m less impressed. Don’t get me wrong, those SIM only plans aren’t bad I’m rather a fan of the sound of that 20GB for £30 one. It’s good to see networks offering reasonably data quantities at reasonable prices. For light users, they could probably get away with losing their land line and tethering to the phone and its 20GB. If you are a low data user then if you could lose paying the BT tax that £30 per month becomes exceedingly good value doesn’t it?

However I’m less wowed by its lower end plans. Shame on you Vodafone for still having a plan that has just 250MB, shame I say, shame! Nevertheless they do start to get better the higher you go so it’s a bit of a mixed value bag. With the complexity of getting a handset too I would have to advise caution, be careful in your selections and keep in mind you may be better off with a SIM only plan and credit carding the cost of a new phone. Perhaps look to their own excellent Smart Ultra 6, buy it PAYG and play in a SIM only plan and you could have quite the bargain.

If you’re interested in Vodafone tariffs, services or phones, head over to the Vodafone website for more information.