A dark night. The only light; a glow from the computer screen. Backlit keys are tenderly depressed whilst clear type letters are added to the Google search box with near zero latency. A grunt of displeasure…still no Windows 10. But wait…what is this? A tiled icon appears in the system tray of the Windows 8.1 desktop. It’s white colouring grabbing focus from all around it. Could it be? Is this the time….? Well, no it wasn’t obviously. As everyone now knows there was an anxious wait for updates and then finally availability on 29th July. So, what do you get for your free upgrade once the nail-biting upgrade has finished? Check out our Top 5 Windows 10 features. 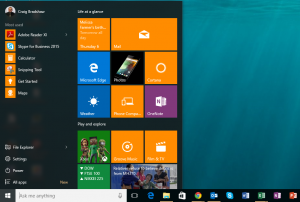 Abandoning the time-honoured Windows Start Menu was one of the most criticised decisions Microsoft made when creating Windows 8.1. Instead Microsoft delivered a jarring tile-based UI which many thought a step too far. With Windows 10, Microsoft brought back the Start Menu with subtle tweaks. The Start Menu itself can operate in two size modes (compact and full screen) which in essence makes the compromise between the old Start Menu functionality and the tiled display. All apps, settings, power and File Explorer options are available, whilst other additions can be toggled in the settings menus for it. It looks nice,l it operates similar to the Start Menu of old and users will be happy with its comeback! 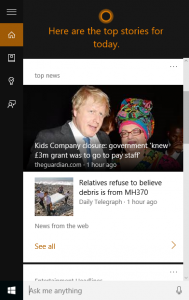 If you don’t know, Cortana is Microsoft’s digital assistant from Windows Phone. Gamers amongst you will know her from the Halo series of games on the Xbox platform also. She makes the jump to Windows 10 and will require access to your personal information in order to provide context sensitive responses to your questions. She can launch applications, remind you to complete tasks, complete Bing searches, find you places to eat nearby and also provide the latest headlines from news sources similar to Google Now. Cortana’s reach will only increase with Windows 10’s adoption and we expect even bigger things from her in the future.

As natural language digital assistants go, she’s been up there with the best in the mobile world and it remains to be seen whether her transition to the desktop will be met with similar fervour. One thing is for sure, she’ll no doubt divide opinion with some consumers already likening her to a 2015 version of Clippy!

Be nice to her and she’ll be nice to you! 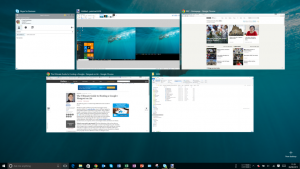 This is one feature that has been long in the making, and now becomes mainstream. Task View is Micrososft’s answer to Apple’s OSX Exposé feature. Task View provides a virtual desktop which can be accessed by the Task View button n ext to the Cortana search bar. One clicked, it shows all open windows and specific programs can quickly be accessed. this is a slightly easier solution than the age-old Alt+Tab keystrokes. That’s not all though. Task View also allows snapping of programs to specific areas of the screen for true multi-tasking.

Then there’s Virtual Desktops. New desktops can be added with specific programs on them and can be switched between as easily as programs. This is great for specific work loads on the same machine. There are an apparent unlimited amount of Virtual Desktops that can be created for almost limitless dissemination of work loads! A very powerful inclusion to Windows 10. 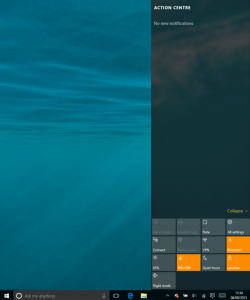 Android has always had one, Windows Phone has one and iOS recently implemented one, and now Windows itself has one. Action Center (it irks me it’s not called Centre but there you are) is Windows 10’s answer to notifications. Swiping in from the right hand side delivers a number of preset switches geared around controlling the connectivity devices, display settings as well as highlighting any notifications that the system has received. Onedrive, Twitter, Updates and Emails are all integrated with many more applications looking to take advantage of the links into the Action Center.

Notifications and the appearance of the Action Center can be modified from the System section of the new settings panel. Applications can be allowed or otherwise to notify the user when received, as well as the quick settings available. It’s not as configurable as some mobile deployments but it’;s a great inclusion for a quick glimpse at your digital world. 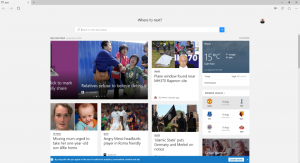 This might not be the BEST new feature, but it’s certainly one of the biggest for Microsoft. Internet Explorer has joined the big memory leak in the sky (well mostly, it’s there for compatibility hidden away in the corner) and in its place Microsoft give us Edge Browser. Edge is flat, cleaner, whitewashed and minimalist with all settings hidden behind buttons with only an address bar and minimal controls available at first look. Edge was built from the ground up to usurp Internet Explorer and has an underpinning of speed and slickness for the modern Internet at the heart of its design.

Cortana seamlessly integrates during your searches to help you achieve your destination and bring you contributory information such as reviews, as well as allowing digital mark or Web Notes to capture information from a web page for visibility later.

Microsoft have also provided a Reading View which essentially strips out the extraneous website content such as banners and ads and leaves the text of the website intact. Reading View gives the perfect compromise and allows websites to continue to receive revenue from ads by only stripping them out after the page has initially loaded.

It’s early days for Edge but there are many more little features to be found and so far it all looks like the right decision by Microsoft. IE is dead…all hail Edge!

Do you have Windows 10? Are you happy with it so far? Bit scared to jump shop from your trusty Windows 7 install just yet? Keep your eyes our for our full Windows 10 review coming shortly for our thoughts.

Drop a comment below with any features you think should have made the top 5 as it’s not a definitive list by any means and see what you can get Cortana to answer to!!