Cyanogen Inc. got their bullet back from Google!?

Cyanogen Inc., not to be confused with CyanogenMod, last year spoke about a “bullet” which should go through Google’s head. Something completely different happened though, and they seem to have got their own bullet back from Google.

What is Cyanogen Inc.?

Let me first explain who they are and what they’re doing if you didn’t know this already. Cyanogen Inc. is a company developing official Android based software for devices. Which basically means the OEM only needs to deliver all the important firmware for the device, and Cyanogen Inc. handles everything else and will at the end push Cyanogen OS to the device. Cyanogen OS is based on CyanogenMod, one of the biggest custom ROM makers out there.

Last year Cyanogen Inc. stated that they wanted to change Android, basically trying to get rid of Google by replacing their apps with other 3rd party applications (This was their: “Put a bullet through Google’s head” – Kirt McMasterplan). Whether this is something good or bad, that’s up to you. But if you were to ask me, they shouldn’t have made this decision. 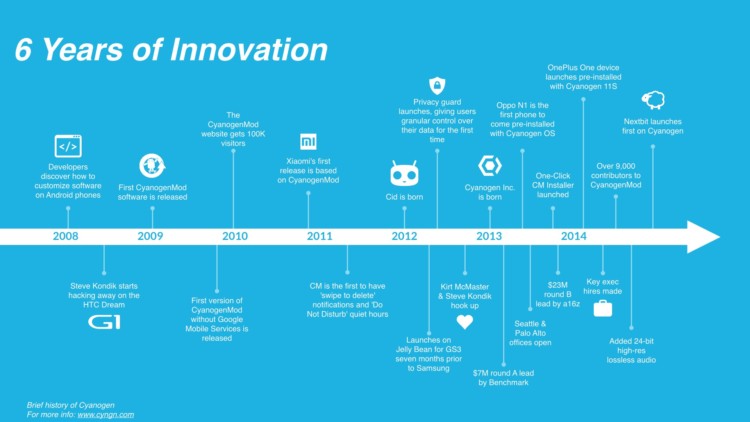 And it’s true that the apps were useful from time to time, until they made the deal with Microsoft to deliver a ton of Microsoft apps with the OS. They could be uninstalled, and that’s great, but can you call installing 3rd party apps: changing Android?? They just delivered some more apps everyone wants to uninstall as soon as possible. My personal request to the OEMs out there, stick with the stock Google applications, and let users install other apps out of the Play Store.

Besides that, they can’t keep up with device updates. The first device they ever supported was the OnePlus One, and they were able to keep it updated “pretty fast”. But the newer WileyFox Storm got the Android Marshmallow update 10 months after the official release, which may sound pretty fast for the price range the device fits in, but looking at the number of devices they actually need to maintain wraps it up nicely.

Not being able to keep up with the competition in terms of OS upgrades, the bundled “bloat” and the fact that they were making a very small amount of money out of their work. And while this may work for 1-2 years, they didn’t change their strategy while they kept getting bigger. Leading to the point where they needed to fire all their employees working on the open-source project CyanogenMod.

If you would ask me about their future, all I can say is that it’ll be a very uncertain one; I haven’t seen a lot of companies interested in Cyanogen Inc. their services. And as of now it really looks like they got back the bullet they tried to send to Google, it didn’t go through their heart; but they’re laying on the intensive care.