Xqisit may not be a name that you’re all too familiar with. They produce mobile peripherals including screen protectors, mobile phone cases, power banks as well as headphones. Contrary to the norm, they are based in Germany and not, as you might have thought, the Far East. We take a look at their iE200 headphones in our full review and see what they have going for them. 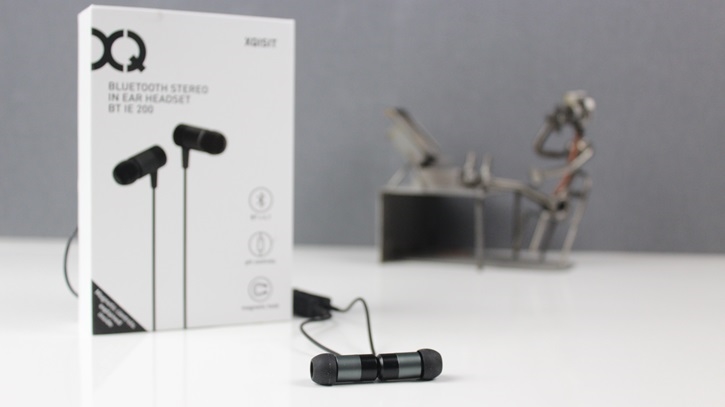 As we mentioned in the intro, Xqisit deliver a plethora of peripherals to the mobile market, and their audio offerings do have compelling aesthetics. Their LZ380 is an over the ear style with nice curves and sleek branding whilst the iE200 IEMs, the ones we’re looking at here, are understated and minimal, and are available in the Grey colour option only.

The iE200 headset is, first and foremost, a Bluetooth set of buds. Using Bluetooth v4.1 and delivering the usual profiles, there isn’t anything earth-shatteringly different here. They are Xqisit’s more expensive set of IEMs so there must be something that sets them apart from the other €15, €20 and €35 offerings? Well, these have magnetic sections to allow them to be easily stored together and to help with avoiding tangles, as well as boasting up to 150 hours of standby time.

Xqisit’s package includes the ear buds themselves, two extra sets of silicone tips, ultimately allowing small, medium or larger ear types a decent fit, as well as an instructions guide. The units themselves have a wingspan over just over two feet (or 60cm), and clasp together strongly thanks to the embedded magnet behind each bud. At around three inches down from each bud there is a rectangular-shaped box on both sides. On the right hand side, the box holds the microUSB port for charging, covered with a silicone flap, as well as the Volume Up/Next Track, Volume Down/Previous Track, and Power/Call/Play buttons. On the left hand side the box hold simply the Xqisit logo and nothing else. Whilst at first glance this might be seen as nothing more than hubris, this is actually a nice touch as it balances out the weight of the control mechanism on the right hand side and allows the units to sit evenly. This isn’t something we’ve seen from other similar types of devices and addresses a real issue sporty types have when wearing these types of IEMs. Kudos Xqisit. Rounding off the features we have a microphone on the rear of the right hand control box, as well as a notification/status LED pinhole which is just tiny!

With the multiple tip options, finding a comfortable fit shouldn’t be an issue for most and we found no problem using the including silicone tips. They sat nicely in the ear too and with the weight balanced correctly, we could use these both in front and behind of the neck whilst in the gym, something not all Bluetooth headsets of this form can boast. Pairing is the standard fare of long pressing the power button until the LED flashes. We’ve seen some magnetic units that use the proximity of those magnets to each other to determine the power status, but we’re glad this hasn’t been used here. Who wants their devices constantly being powered on when they are sat at the bottom of a gym bag? Nobody, indeed.

So with the iE200’s charged, let’s start using them. Firstly the magnets in the buds aren’t there just for show. Aside from a ridiculous necklace, hanging these around your neck when not in use actually has some practicality to it. For example, when a call comes in, un-snapping them and putting them in your ears answers the call. Likewise reversing that step ends the call. When listening to media, snapping them together pauses the current track, whilst detaching them continues playback from that point. Neat huh?

They get plenty loud, of that there can be no argument, and when they get loud there isn’t the usual distortion either which is nice. Bass is punchy and crisp without overpowering other elements of the track. Testing out acoustic tracks details that there is adequate clarity, but there is also a rather large dollop of some sort of spatial effect attempting to give off a pseudo-3D sound. Switching to Hip-Hop and bassy tracks and that spatial effect is more noticeable. The majority of the production of the track is clear, but vocals sound like they were recorded in an empty bathroom such is the result. If you were to mess with am EQ app and chose the “large auditorium” mode – it sounds just like that but dampened a little. We tried this across a couple of other devices and the result is the same. Is it ‘bad’ or ‘poor quality’ audio? No, it’s just not what we expected. The vocals are still audible, and there is no degradation of the experience, it’s just a little off-putting to begin with.

Getting used to that EQ-esque effect took around 60 mins, after which we spent 2 hours continuously testing. On our second charge we managed just shy of the 3.5 hours of continuous playback Xqisit claim of the 60mAh battery in the iE200’s. For a 60mAh battery that’s not bad at all, but compared to another, much cheaper headset, the IEC Magnet Headset, it’s around a third less play time you’ll get with these units. 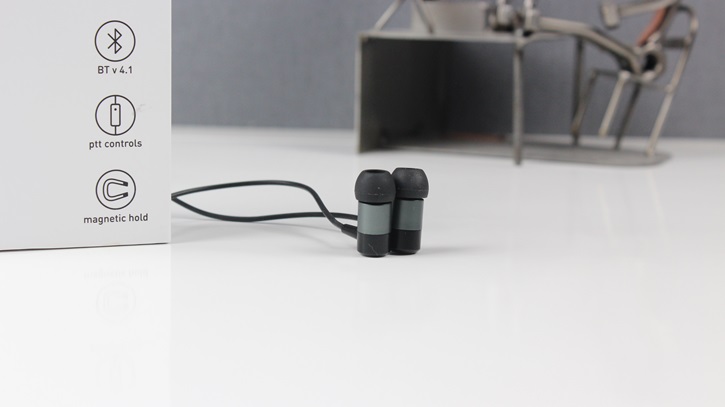 Overall the units felt a little bit of underwhelming. Don’t get us wrong, the audio is fine, the build is fine, the product is – well – fine. If you’re coughing up the best part of €70 on a device (especially as the Pounds Sterling conversion isn’t the best currently) you can legitimately expect them to be better performing than devices costing around a third of that. We’re not convinced that this is the case here.

The price to one side however, these are acceptable IEMs for those on the move, commuting, or indeed at the gym. They didn’t once fall out, and the weighting mechanism employed by Xqisit is something we’d happily welcome on other such devices and give them a huge twin pair of thumbs up for that! 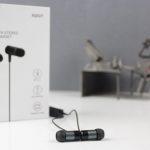