When Mobvoi, the company behind the TicWatch brand, announced they were bringing out successors to the wildly popular S and E series, I was excited. I was even more excited when I found out that these were the first (and currently only) TicWatches, and I believe only WearOS watches, to feature Swim tracking, and as someone who swims 3 times a week, being able to quantify my Swims would be awesome.

Disclaimer: Mobvoi provided us with this unit for the purposes of review, they have not compensated us in any way, nor do they have any say over the outcome of this review. This review has been in the works for nearly 4 months, mainly due to software changes. 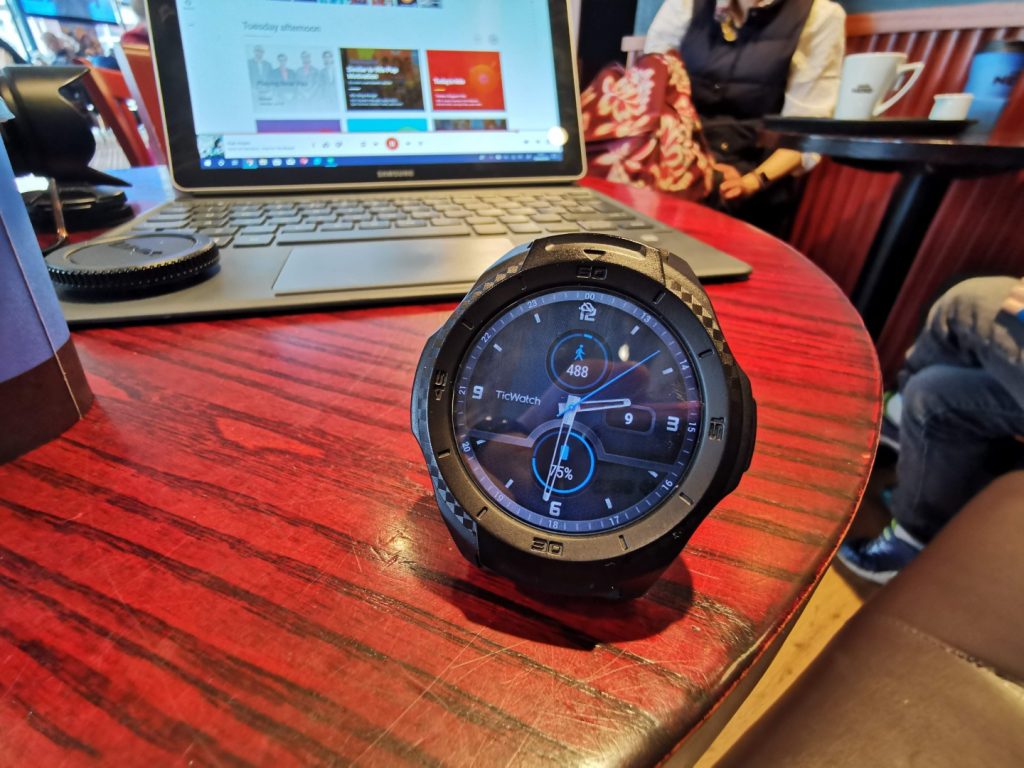 For some more complete specs, head on over to the TicWatch S2 page here.

The S2 is a masculine, large-ish outdoorsy watch, very much like a less faceted G-Shock type of watch, and I understand this aesthetic, but I’m personally not a big fan of it. This is a very outdoorsy watch, not out-of-place when you go hiking, but very out-of-place in, for example, a steak house in Paris (something that actually happened to me). 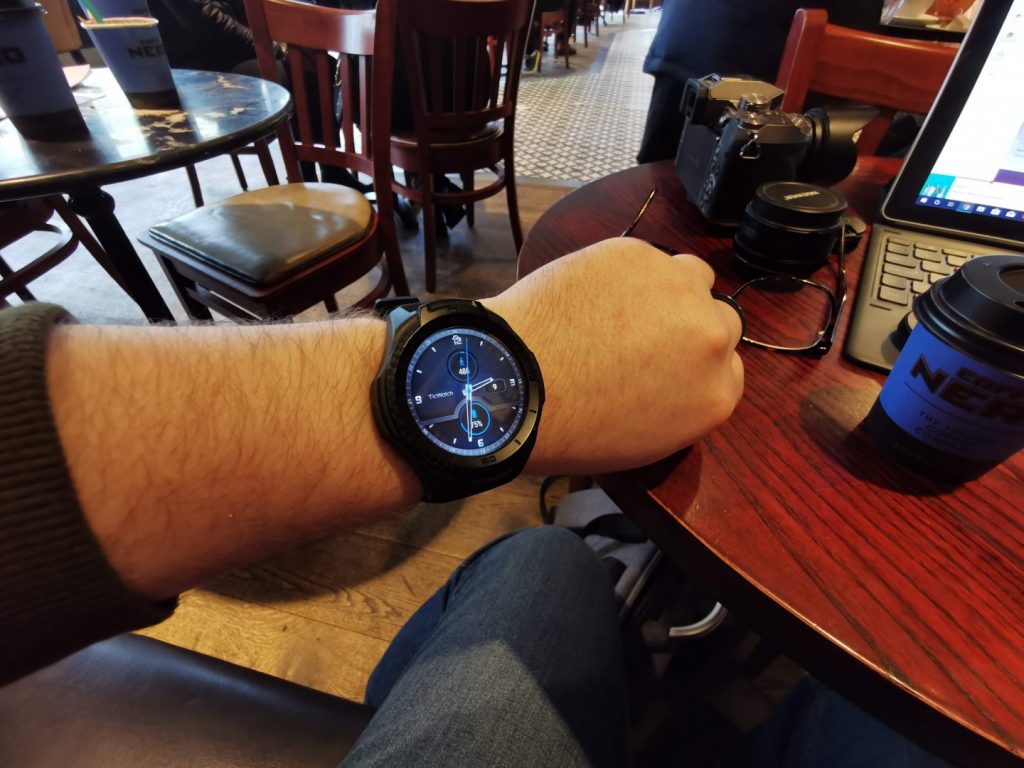 The entire chassis is made of Polycarbonate, a nice solid choice for an activewear watch and it really can take a beating, it’s hit doors, tables, the floor and much more in my time with it, and the only signs of wear is a tiny piece of paint in the ring around that I haven’t been able to clear, so I’m pretty happy with the polycarbonate chassis, it’s light, but it doesn’t feel unsubstantial or cheap, which plastic watches tend to. 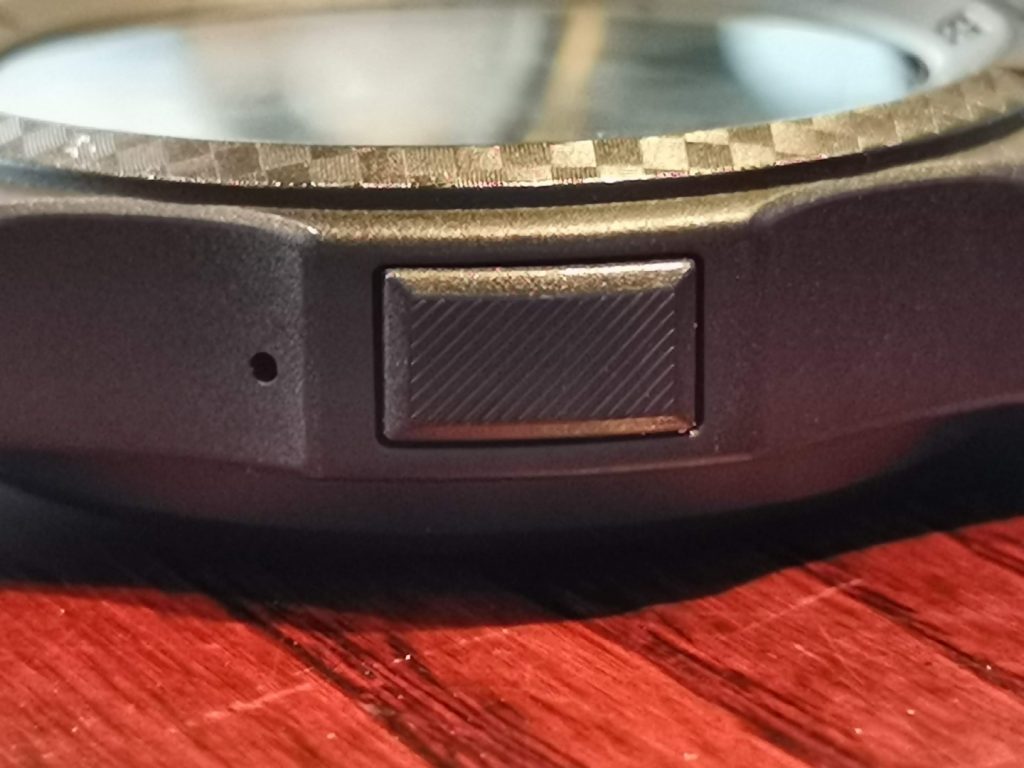 One thing I am very happy with though is the screen. Whilst It’s a bit large for my tastes (I have tiny wrists) at nearly 1.4” the resolution of 400×400 and it being an OLED screen is absolutely stunning. Whilst I don’t have absolute peak brightness numbers, I can say on brightness number three or five within WearOS, is more than comfortable viewing even in direct light. This display is covered in tempered glass, I am not sure if it is Gorilla Glass, but in the 4 months or so that I have had this watch, the screen doesn’t appear to have any scratches on it, which is impressive once again given the abuse it has endured. 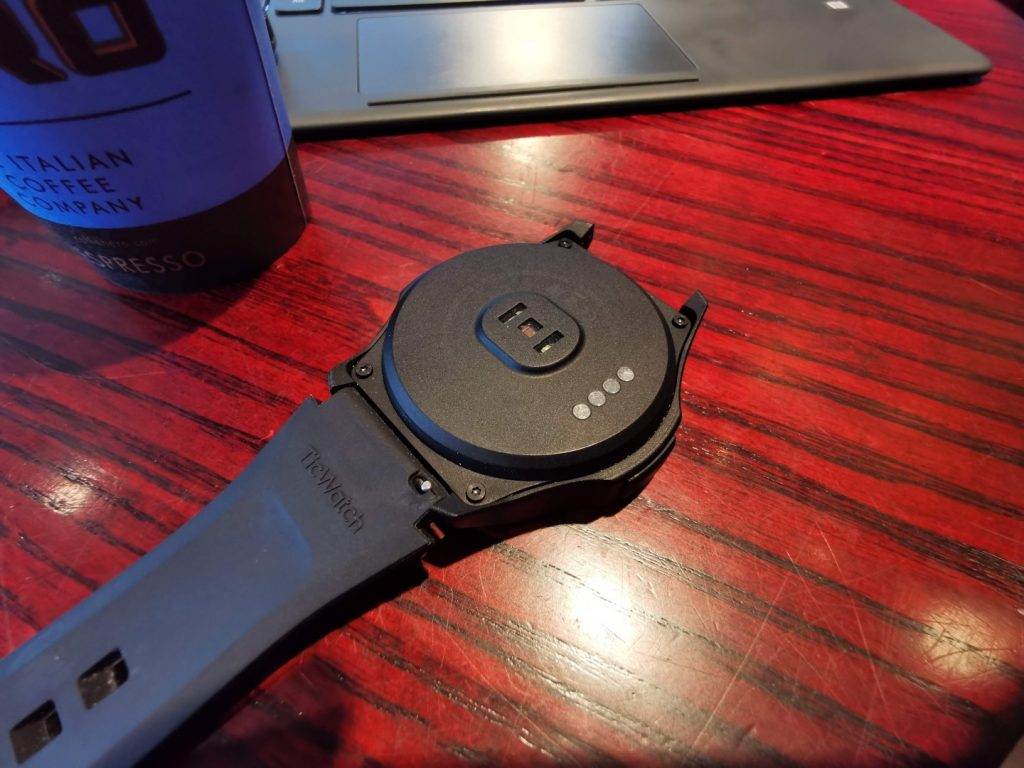 On the right-hand side of the watch is the sole physical button on the watch, it doesn’t have too much slop in it and it is really nice and tactile, but unlike the TicWatch Pro, the TicWatch C2 and most of the other WearOS watches, this only has that one button. Other Ticwatch devices have two, and most others have three buttons, one of which tends to be a rotating crown button. There is none of that here. Which makes things a bit more difficult. Tapping the button on the watch face takes you to apps, tapping it when in an app takes you to the watch face. A long press opens Google Assistant and an even longer press opens up the power menu, some of these things would be much easier with more buttons, that’s for sure. 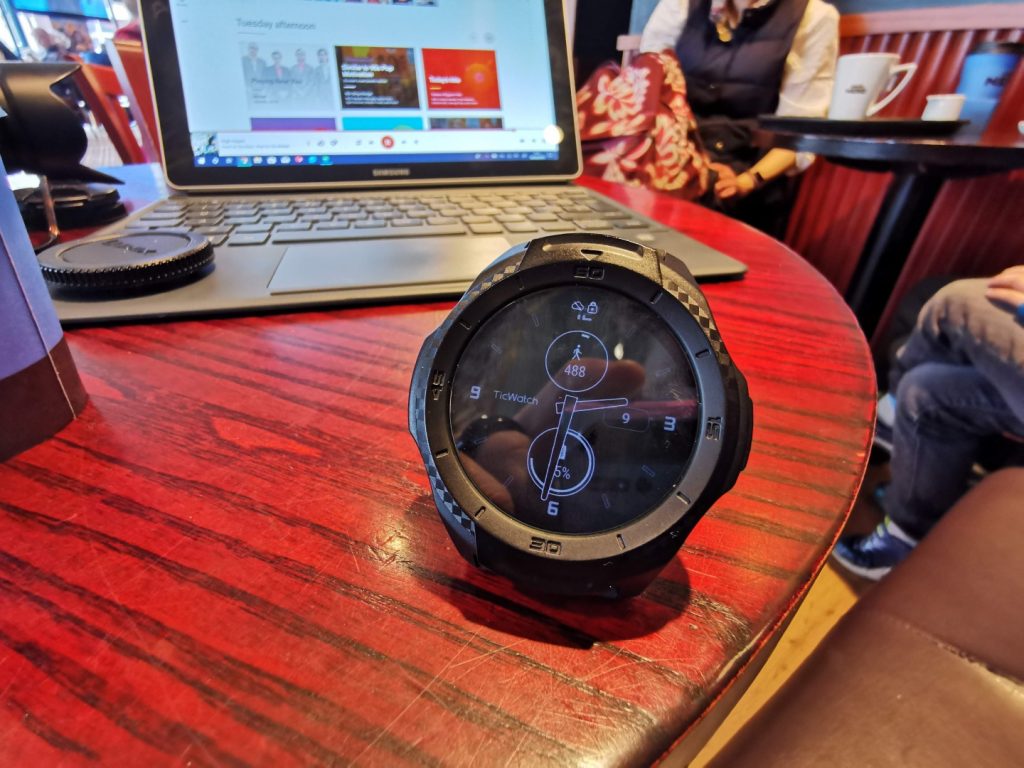 Lastly in hardware, the straps. The TicWatch S2, being an activity based watch, these standard silicone straps are nice and flexible, my main gripe with them is the same as pretty much every silicone strap I’ve ever tried, which is that they get dirty really easily and they get uncomfortably warm very quickly. I would swap this for a leather one, but as this Watch’s main feature is swim tracking, I wouldn’t want to swim in a leather watch strap, so I’ll keep this silicone one on until I can find a softer one.

WearOS is, well, it’s still WearOS. That’s not necessarily a bad thing, but it isn’t my favourite OS for wearable devices, that’s for sure. 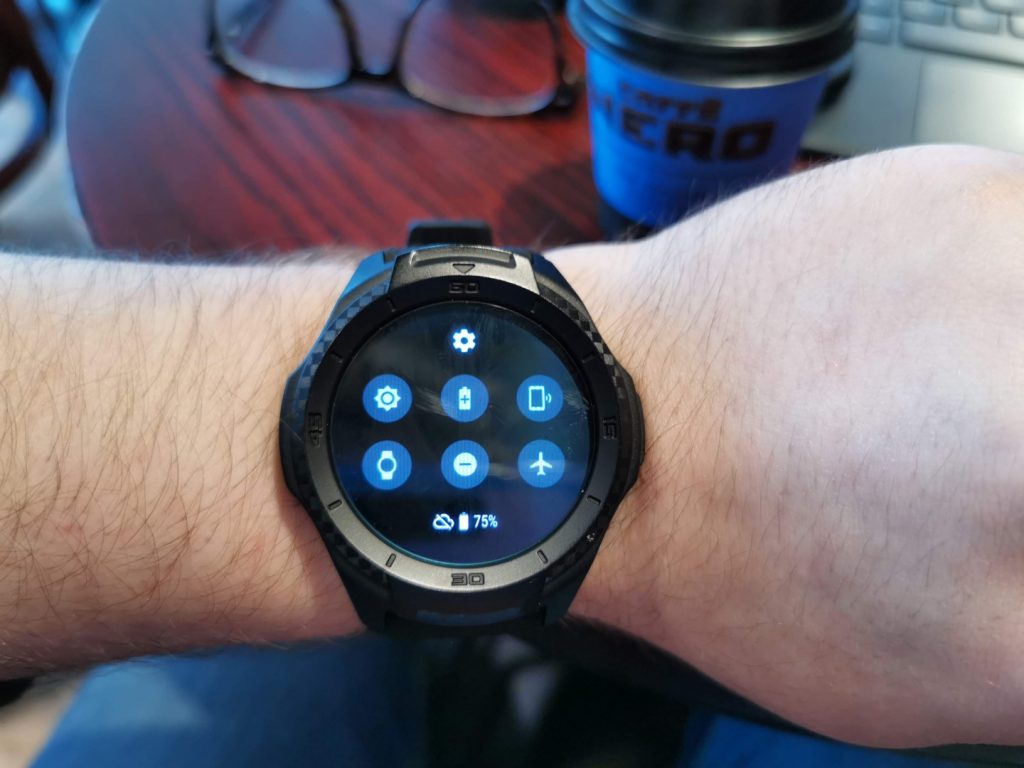 WearOS 2.6, which is what the S2 runs is a much more refined version of what was once Android Wear. the gesture navigation now makes a lot more sense, the ecosystem is pretty good these days, but a few niggles from the early days still linger, and one of those, is performance. 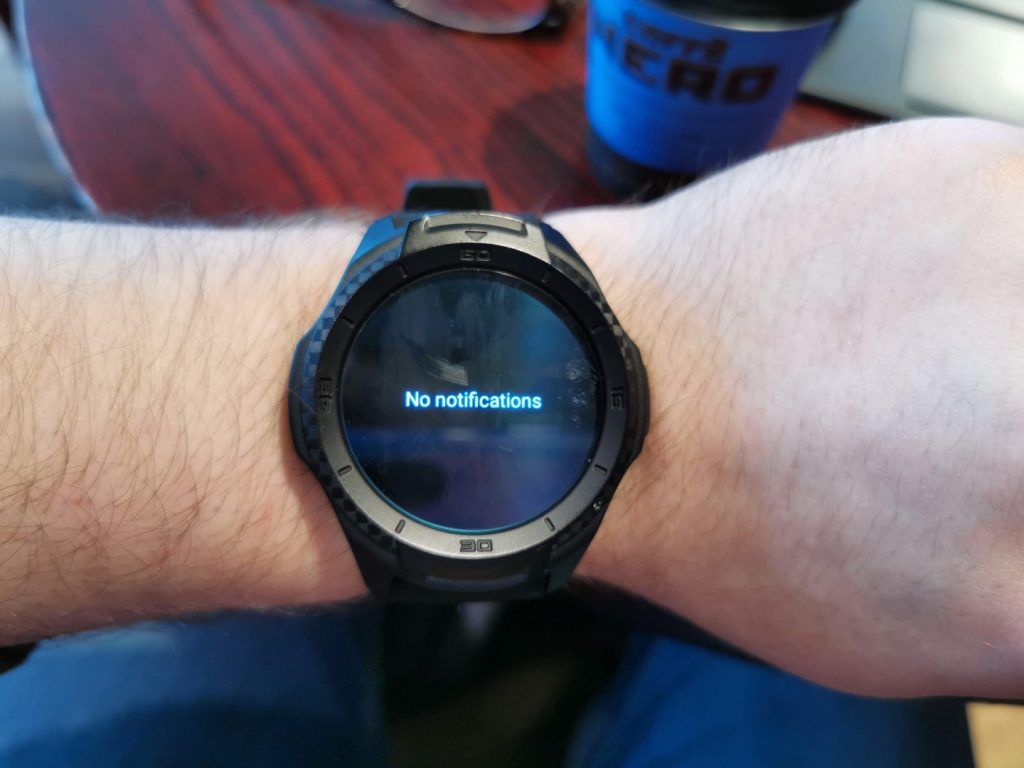 Part of this can be blamed on the silicon inside, the Snapdragon Wear 2100 is ancient. it is a 28nm, Quad-Core Cortex A7 based SoC, it wasn’t even cutting edge when it was released in 2016, so part of the blame can lie there, but WearOS, formerly Android Wear, was never fast, no matter what Silicon it was running on. And the problem is that it is inconsistently slow, which makes you more frustrated as sometimes it works as swiftly as smoothly as you’d hope, and other times you’d scroll and it’d take a half second or so before actually scrolling. Or when you turn it on after a while and try to input the lock screen pattern or pin, those can just stutter or freeze, very frustrating experience to say the least. 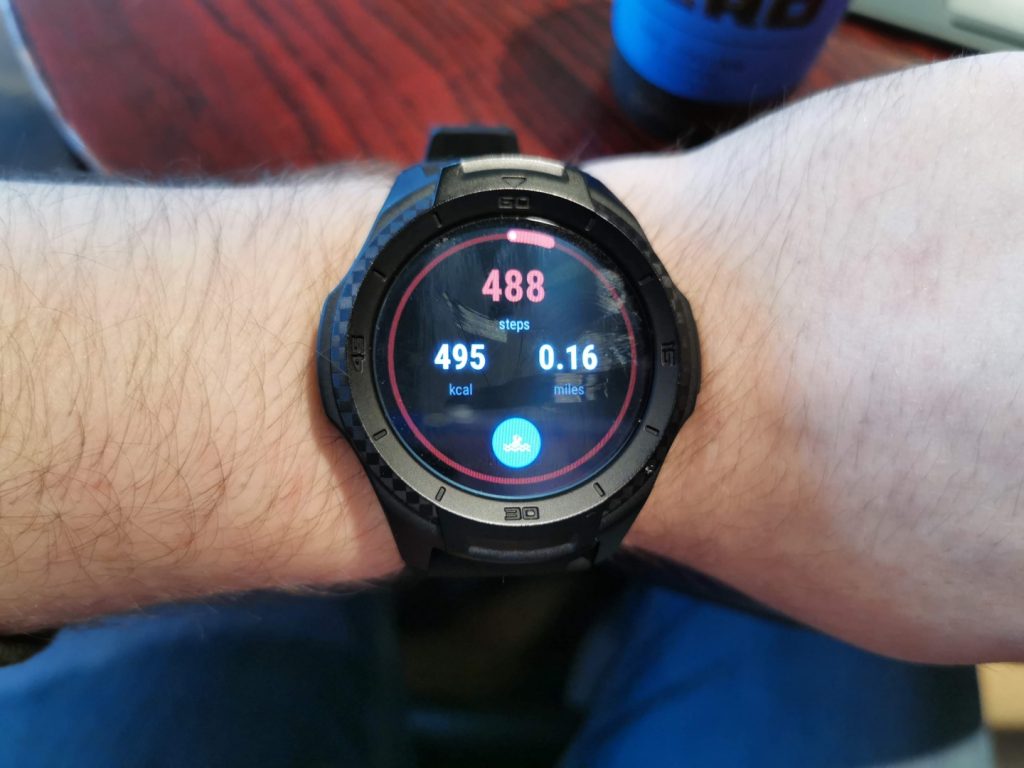 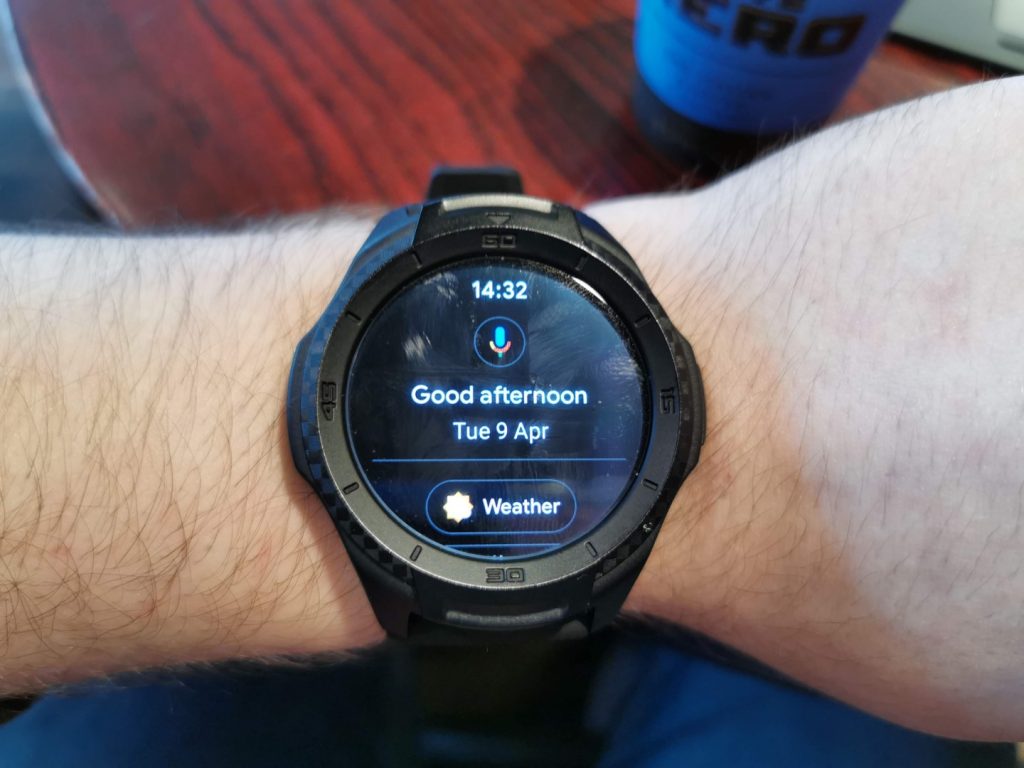 With that quick intro out-of-the-way, I’ll say that I actually really like the navigation of the new version of WearOS, it’s much closer to what Mobvoi used on their older watches like my favourite, the TicWatch 2, which is TicWear. Check out my review of that here.

Mobvoi have added a few of their own apps to the WearOS experience, and they’re, well, fine. The one I am really interested in it TicFitness and specifically the Pool tracking sub-app. This is where the S2 starts to fall apart for me. In the nearly four months of usage, I have had a grand total of four swims tracked properly in this time. That is insane, worse than that? How often it is wildly off.

The first swim I ever tracked with the S2 said that I did 55% more than I did. Look, I would have loved to have done that many lengths of my pool, but I only did forty. I know I only did forty because if I did any more I think I would have drowned of exhaustion. I instinctively also counted in my head as I had been doing for all visits six months prior, despite tracking, but I’m glad I did as I sure as hell didn’t do nearly as many lengths as it said I did.

It took about 3 weeks of “learning” before I got something close to my actual length count, but that is just bad. Again, in nearly 4 months I’ve had 4 correctly tracked swims, contrast that to the Huawei Watch GT, which had an impeccable swim tracker, the first time I jumped in the pool I just told it I was swimming and then started. With the S2 I had to say how long the pool was, how many I was hoping to do (which apparently means nothing) and other items. Worse than all this, is that ending the swim tracking is super hard, the screen is near impossible to operate with wet fingers, and that is seemingly the only way to stop the tracking, which is in contrast to the Watch GT, where one button brings up the pause/stop menu, and the long press stops the swim, another reason why the S2 could do with more buttons.

The good thing about all of this is that it can get better, and one of the reasons it’s taken so long for me to get this review out is that it has been changing and getting better. I’ve lost count of the updates this has had, and these have had a drastic change to my opinion of the watch, the performance has especially improved, as has battery life, but when the standout feature of the watch, which is Swim tracking, is more often than not, between 30-50% wrong, that gives a really bad impression, and it sucks as otherwise, this is a pretty solid fitness tracker otherwise.

Most of the time? It’s fine, purely just fine. Not great, and not terrible either, but sometimes, it gets bogged down and it becomes abysmal, truly abysmal, as in, taking upwards of 5 seconds to wake the digitizer up after the screen so I can put my lock screen pattern in.

As I said, a lot of this comes down to the ancient, underpowered and just bad SoC that is the Snapdragon Wear 2100. In fact, I charged and booted up my TicWatch 2, which has the MediaTek MT2601 SoC for wearables, that is Also Cortex A7 based, but it only has half the cores, but the TicWatch 2 with TicWear absolutely destroys the S2 in performance. I know a lot of this is software based, but a lot of the issues come around from the fact that the Snapdragon Wear 2100 is just bad, and the Wear 3100 doesn’t improve things as it just has a lower power DSP for power saving, that WearOS can’t even properly use yet!.

There are ways this could have been avoided, but the Wear 2100 is basically a reference design for WearOS at this point, and it is a shame, as I’d have loved to see the MT2601 in this, or even something new, maybe something using the Cortex A35 or A32, maybe using Samsung or GlobalFoundries’ FD-SOI fabrication nodes for lower power consumption and lower leakage, but until then we’re stuck with 28nm planar nodes making Cortex A7 SoCs – sigh.

This is another “just okay” section. Whilst Mobvoi tout this as two days; I’ll call it one and a half days at most.

Charging, however, is nice and quick, though sadly it is a proprietary magnetic puck, so if you travel as I do, it’s another thing for you to pack.  Thankfully it is small, the cable is a nice length and the magnets hold the watch in place adequately.

So, after all this, how do I feel about the TicWatch S2? Well, I actually somewhat like it, but the design isn’t for me, and the fact it’s a standout feature, swim tracking is unreliable is maddening. But what if you don’t swim? The other activity tracking features work really well, and the design is sturdy and well suited for active lifestyles.

The other thing to note is the price. The TicWatch S2 is currently a staggering £165. That is incredibly cheap for what you are getting, and it is hard to ignore that it is pretty much the only full smartwatch with these features at that price, and that is insane.

Would I recommend it? Hell yeah, but I wouldn’t personally buy it. I‘m not a fan of the design and for £15 more I would get the C2 from TicWatch instead and get a classy dress watch and go back to manually tracking my swims.