I wanted to get my hands on a Veho power bank for some time so when we got chance to grab a Pebble Smartstick+ I called dibs and have been using this Aryton Senna signature edition for the best part of a couple of weeks. Let’s see how I got on. 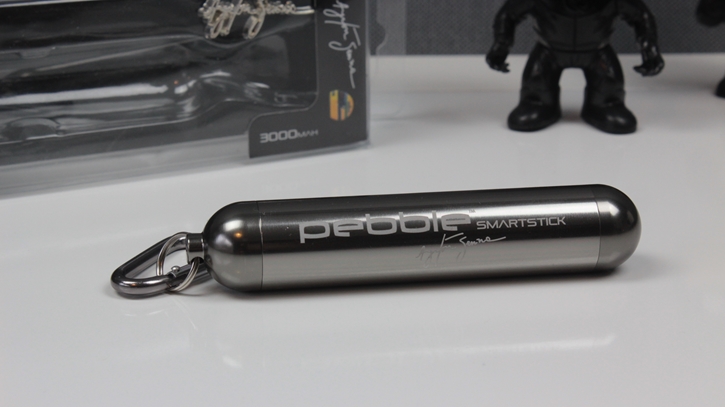 First off, this power bank is perhaps one of the prettiest I’ve used. Finished in the “Titanium Grey” colour variant, the metallic chassis resembles a futuristic capsule or pod and is a very nice design to have dangling from your tech bag. And that’s where it will spend most of its life to be fair as this isn’t a powerful charger, it’s an emergency charger. If you’re after Qualcomm Quick Charge functionality or equivalent offerings from other vendors here, then you’re looking in the wrong place. Delivering just 0.5a (500mA) it could struggle to charge some larger more demanding devices, but again, in a pinch, it should provide that boost you need to get a job done.

This unit measures just 11.5cm in length and is around 2cm in diameter making it rather pocketable. It’s quite hefty due to the immense construction though at 84g. That might leave a dent in your pocket, so during testing I always used the handy carabiner to attach it to my laptop bag.

Unscrewing the dust cap where the carabiner resides shows the microUSB charging input, as well as the type A USB output port. Other than some Aryton Senna and Pebble Smartstick+ branding on the main body, there’s nothing else of note. No LED flashlight (thumbs up emoji!), no other ports, nada.

Also in the box comes quite a nice material carry sock with drawstrings, as well as a quick start guide (no, you don’t need it) and a USB cable with adapters for Mini USB, microUSB and 30pin Apple connector. No Lightning, and no Type-C USB connector. That might be understandable as this isn’t a brand new device and has been around for a little while. Still, a refresh including these would have been nice. There’s also an Aryton Senna signature style pin. It looks nice enough and for those who are Senna, or Motorsports fans, I can see them wearing it on a coat, hat or something similar; it’s a nice inclusion to this edition!

Performance wise, I was slightly more impressed than I expected to be, largely because my findings didn’t match the included literature. When using the Pebble Smartstick+ to charge the OnePlus 3, I saw a consistent draw of over 1A. Not a huge amount of juice, but enough to keep things ticking over. When connecting this up to a Lumia 950, it dropped back down to the 0.5A range where I expected to see it. Battery charging speeds will differ therefore from device to device and some will draw a little more power than the Pebble Smartstick+ initially suggests, which is great news.

Durability is another area that one looks for in an emergency charger, and the Pebble Smartstick+ is decent there too. Coming in at around 84% efficiency, I was able to easily boost my OnePlus 3 from 50% to full, and get to around 40% from dead on the Lumia 950 before the Pebble died. That’s not bad at all. Charging the Pebble Smartstick+ itself is a slightly painful task though, with the input being rated at 500mA also, you can expect to be waiting around for this unit. However, I didn’t really worry too much about it as I was using this as an emergency charger, I just ran it over night, picked it up in the morning and off I went.

Overall, a nice little package with a few irritations. The price on MobileFun is sitting currently at £17.99 which, for the branding associated with the device, and the build quality isn’t too bad. There are cheaper 3000 mAh batter packs about though. Secondly, ramping the output to 2.1A would have been nice and is almost a necessity in this day and age. Again though, a trickle charge isn’t a bad thing for Li-ion batteries, and it’s also not a bad thing for a charger you’re only supposed to use in a pinch.

And that’s the general conclusion here. After a powerful piece of kit to keep all your devices juiced up whilst you’re out and about? Look elsewhere. Need something sleek and stylish to use in the event you need to bump your smartphone or tablet a few percent to finish a that tweet you’re writing? Then the Veho Pebble Smartstick+ might be worth your time. It’ll certainly look the part! 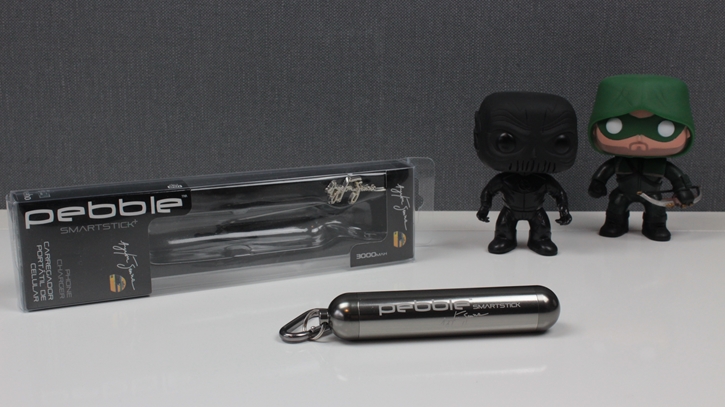