Home / Reviews / Peripherals / Tudia Cases Review: Make sure to check these out

Tudia Cases Review: Make sure to check these out

This is already my third case review at MobileTechTalk for the OnePlus 3 / 3T, following the reviews of the Poetic cases and then later on the Ringke Fusion cases. Did I enjoy using these cases? Do I think that you should, or at least could think about buying those cases? You’ll find it out in my review of the Tudia Merge and Tudia Tamm.

Tudia did provide the cases for this review, for which I’m really thankful. But as always, they had no influence on the outcome of this review.

Normally we’re only reviewing one product at a time. But, to save us some time on writing the reviews, and saving you some time on reading the reviews we’ve decided to once again review 2 cases in one review. Just like we did with the review of the Poetic cases.

The first case I would like to talk about here is the Tudia Tamm. And there basically isn’t really a lot to tell about this case. It feels great, all sides feel smooth, which can’t be said about every case. The matte black finish on the back together with the “Kevlar” finish up top and bottom are neatly bond together. One weird thing though, and it might just be my unit, there was a straight line in the Kevlar finish up top. While it didn’t really annoy me, and I can’t feel it, it’s just something I would like to point out. Just like I did with the Poetic cases review I’ll be giving grades at every part of the review, and in terms of build quality this case certainly deserves a 8 out of 10.

Next stop, the Tudia Merge case. It feels and looks good at first sight, until you really start using it for a longer period of time. At the corners of the case you can clearly feel some edges, the PC back plate doesn’t sit completely flat with the TPU part, it seems like this case loves scratches, because specifically the bottom part of the case is filled with them already. At last I would like to talk about the backplate itself, which seems to be having some issues with the coating. One of my friends, Caitlin S. was kind enough to provide some pictures which are shown below, this isn’t a one off case, look under the Amazon reviews and you’ll find a lot of people with similar issues.

You can clearly see that the coating on the PC back simply comes off. And while it seems to be fixed in batches released later on in time, beware of the fact that this might happen to you as well. Therefore I’ll be giving this case a 5 out of 10 for its build quality.

If I wouldn’t care about the protection of my phones, I wouldn’t be walking around with a case around my phone. But I do, and I really need a case to protect my phone. Although I’m not regularly dropping my phone, it just makes me feel comfortable using my phone. 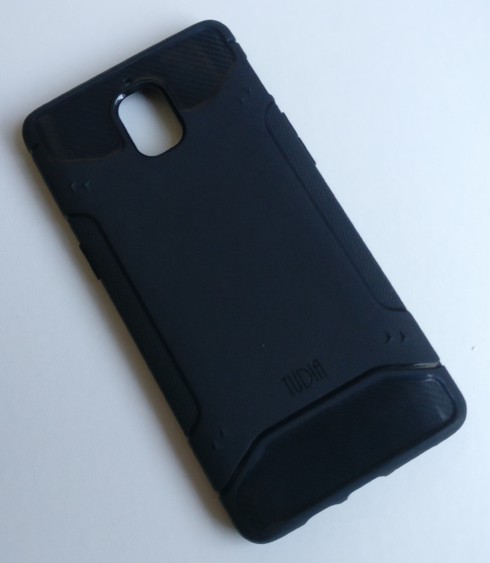 First off, the Tudia Tamm. And I could make this one really short. Which I’m probably just going to do to save you some time on reading this review. This case offers some decent protection, of course, you shouldn’t be throwing around with it. But due to the pretty thick TPU, it’ll be able to absorb some of the shocks. Do note that as this case tries to be as minimal as possible, there isn’t a huge lip at the screen side of the phone. Yeah, you can put the phone down on its face on top of a flat table. But don’t expect it to give you any protection while you accidentally drop your phone on its face. I would give this case a 6.5 out of 10 in terms of its ability to protect your smartphone. 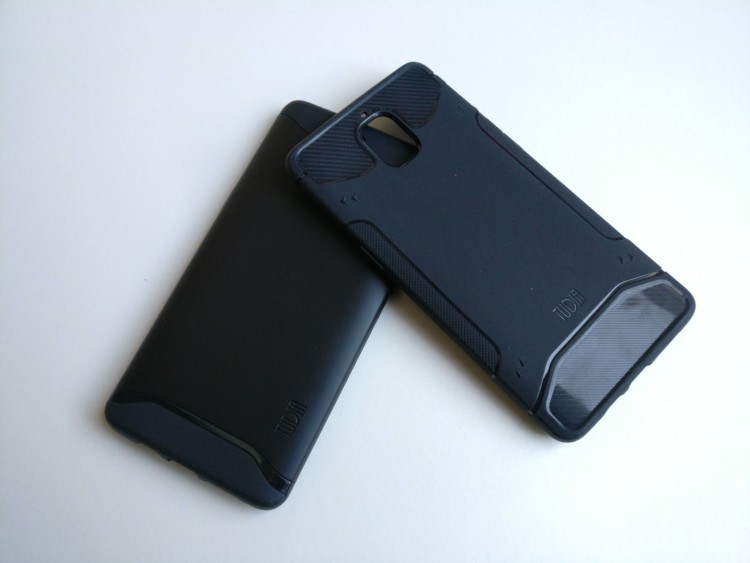 Tudia calls the Merge a heavy-duty smartphone case for the OnePlus 3. And I can think of why they would call it a heavy-duty case. The thick (and I mean really, really thick) layer of TPU will be able to handle a lot more shocks compared to its competition out there on the market. Coupled with the PC back, giving the case it’s rigidity, I wouldn’t be too damn scared if my OnePlus 3 would drop with this case around it. And this case certainly deserves a 7.8 out of 10 in terms of the protection for your phone.

Personally, I do need my phone case to really protect my phones, but it also needs to be stylish in some way. And for me the Tudia Tamm hits both of the checkmarks, the black matte finish mixed with the Kevlar-like finish up top gives the case something different compared to all other cases out there. Yeah, it’s all black, and that might be a bit boring. But it does look really good, and if you’re looking for something stylish for your OnePlus 3, don’t forget to take a look at this case. Definitely worth an eight out of ten. 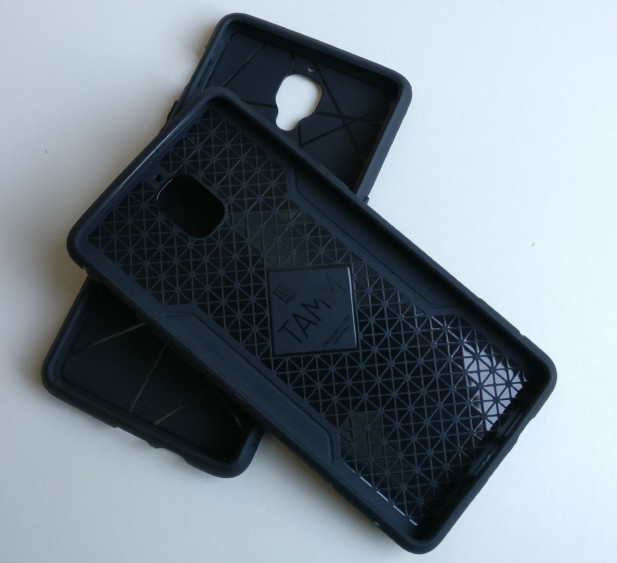 If you were to ask me, the Tudia Merge is more like a business type of case. For those who are in the need for something to protect their phone, with a simple look. Nothing too special, just nice and business like. And that’s something I’m personally attracted to at times, but on the other hand. It does make the OnePlus 3 into a boring looking phone with a plain black case. Whether you like the design of this case, is of course something you’ll need to decide for yourself. It may not look too special, but it does its job, and for some that’s all they need. I would give this case a 7.5 out of 10 for its design.

So, this is the final part of my review of the Tudia Tamm and Merge before I’ll write the conclusion at the end. How about the cutouts and buttons of the Tudia Tamm? As for the cutouts, they’re all perfect, neatly aligned. I would only like to mention that it can be pretty hard to reach the alert-slider. But as this isn’t something you’ll be reaching out to every few minutes or so, it won’t be that big of a deal. The buttons of the Tamm are really tactile, maybe not as tactile as the buttons of the Ringke Fusion case, but they’ll certainly make anyone who needs tactile buttons happy. As for the grip of the case, I love it. No more sliding around, no matter how you’re holding the case. For the functionality, I’ll be giving this case an 8.5 out of 10.

Next stop, the Tudia Merge. The cutouts are similar to those of the Tudia Tamm, although the cutout of the alert-slider is for some reason a bit wider compared to the cutout on the Tamm. This makes that reaching out to the alert-slider is pretty much as easy as it gets. The buttons are something I really need to get used to, even after a few weeks of using the case. They’re really stiff, making it really hard to press them. Besides that, I’m somewhat missing the tactile feedback of the buttons like it is on the Tudia Tamm. Nonetheless, it’s still way better compared to most cases out there. In terms of grip, it’s pretty easy to hold onto this case, but it doesn’t give me as much grip as the Tudia Tamm case. I would give this case a 7.5 out of 10 for the functionality aspects.

We already arrived at the end of this review, so let’s get going with wrapping up this review for you. The Tudia Tamm offers a great build quality, average protection and a great design. Besides that, the cutouts are great and the buttons are even better. This while costing just £10.99, a price which is hard to beat if you were to ask me.

The Tudia Merge comes in at a price of £10.99 as well, the build quality is just bad, it offers great protection and the design does its job. The cutouts are great, but I would’ve hoped for some better buttons on this case.

In the end, would I be able to recommend these cases to my friends and to you? The Tudia Tamm certainly is a great case, which is more than worth its price of £10.99. The Tudia Merge comes with some build quality issues, but everything else is fine. Is it worth the £10.99? Yes, it is, and maybe not because it’s so amazing, but more because it does its job. And sometimes that’s more important than being different. 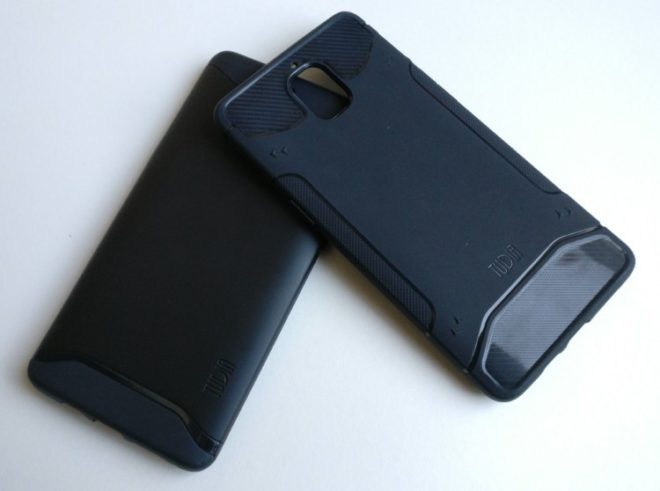