When we had the opportunity to look at a gadget that allows movies playing on your phone to be scaled up for the masses to enjoy, and it’s made out of cardboard, then our inner Blue Peter fan kicked in and we jumped at it. The Smartphone Projector from Lukies is in the house. 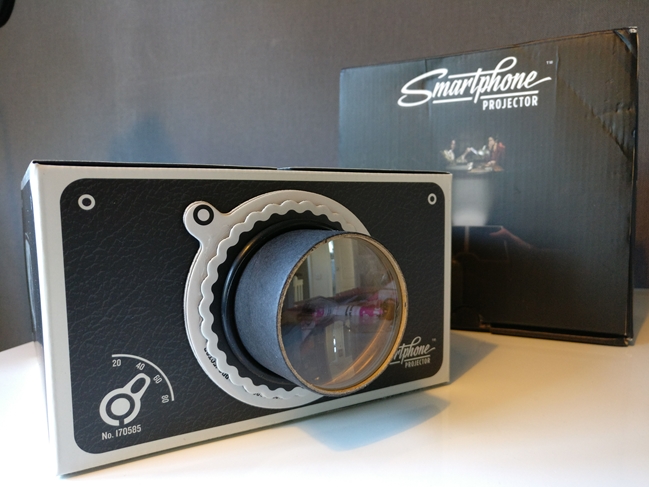 No, don’t take off your coat. We won’t be long here. The Smartphone Projector from Lukies is a nice idea. Spend a little time crafting your own personal cardboard projector, insert a non-slip mat, and a glass lens, and away you go. There’s more to it though.

Firstly, inside the box you get a metric sh*t tonne of pieces of cardboard along with a few rubber bands to use each side of the lens tube, the lens itself, and a non-slip mat which will be used in the back slot to hold the smartphone in place. There’s also instructions on the inside of the main box which you should just throw right in the bin now….go ahead, we’ll wait.

Right, now that’s over, using YouTube to build the product was a breeze. Simply superglue (not included) the matching numbered cardboard flaps together, and you’re about done. There are a few so a few small tubes of superglue were used making this – bear that in mind.

As I said, building the unit was relatively easy and most of the time was waiting for the superglue to dry and the unit to be ready to use. I’d say 25 minutes in total. Not too bad an investment when you consider the final product right? A huge projector screen made of cardboard that you and your friends/family can enjoy as one, right? Negative….just no, not at all.

The Smartphone Projector product is a bit of an annoyance. So you muddle through and get this unit built and your reward is performance that is rather dependant on luck. Firstly, the smartphone dimensions quoted as fitting this unit (the smartphone fits into the back slot and is then pushed into the unit), is 145 x 80mm. That means the iPhone 7 Plus, OnePlus 3, LG G5, and Pixel XL are all out, whereas Samsung’s S7, and Sony’s Xperia XZ are just about fitting this unit. Okay, fair enough, it’s device dependant…what accessory isn’t right?

The other issue is brightness. The device max brightness is a consideration here too. I’d have to suggest a device which exceeds 500 nits of brightness in order to get anything visible, even in pitch black. Oh, yes, that’s right. Once you’ve selected the correct device from the plethora you have just sitting on your table (you all have many devices to choose from right?) you then have to almost ring up the National Grid and ask if they can just cause a 2 hour blackout so you can watch the movie on a wall, with an image that ends up measuring around 25″ max at a decent quality/focus.

There are some good points though. The cardboard is of sufficient grade that it can take a bit of a bashing, and the concept is a cool one. Additionally the aesthetic is one of an old school projector or old camera which is nice, and there are some cut outs allowing the running of a cable to power the device that is running the content which again is nice.

My overall thoughts on this product are easily predicted I think. Despite the concept and the build quality, the performance is just not there to warrant purchasing this unit. I’d argue that using a Chromecast, MHL HDMI interface, or just mounting your phone on a stand and letting your mates watch it with you would give you a superior experience most of the time.

That said, if Zeus is merciful to you and you happen to have the perfect combination of size and high max brightness on your smartphone, and you live in a darkened cave, then you can get an acceptable image from this unit. That’s really not worth the £19.99 though is it? Your choice. 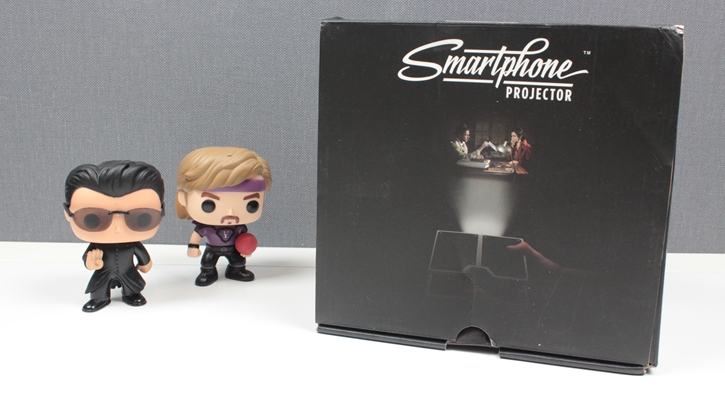