There is nothing we like more at MobileTechTalk than getting our hands on strange, quirky and nuanced products, and this one fits the bill. The smartphone controlled paper plan, PowerUp 3.0 from PowerUp Toys is a blend of new and old school and might just be a cool stocking filler this Christmas. 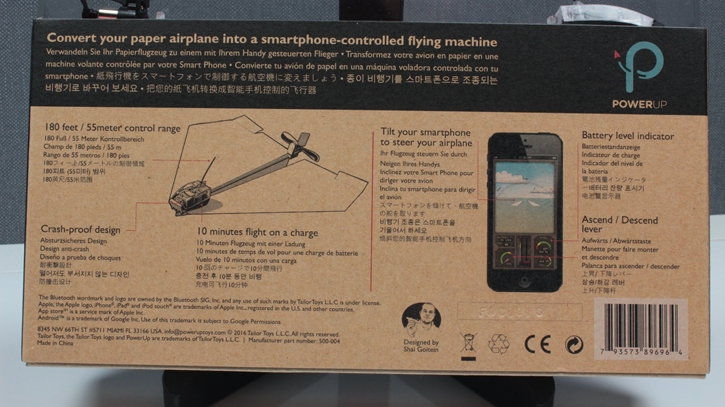 We’ve all done it as little kid right? Grabbed some scrap paper, made a crude Concorde shape and then took to the skies, only to see our creation immediately nose dive into the nearest piece of dirt! Well, PowerUp 3.0 looks to deliver some extra help that wasn’t around in the 80’s! With a motorised propeller, rudder control, and smartphone app from which to control it, your paper plane endeavours could be set to be a little more intense, and let’s face it, more fun.

The PowerUp 3.0 iteration has a number of improvements over the 2.0 effort. For a start, there’s a more snazzy looking cockpit with a see through plastic area to see the guts of the unit. There’s also the ability to control the unit via a smartphone app for both iOS and Android. Finally, there’s a rudder, and a more exciting set of paper plane templates out of the box. 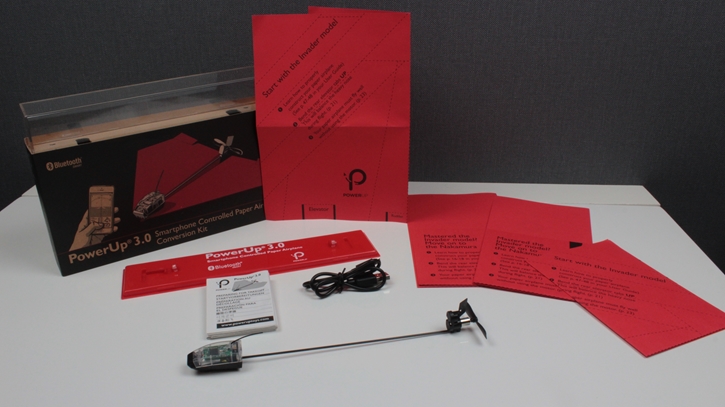 Within the box, you’ll get:

More templates can be found from the PowerUp Toys website.

Before taking your unit outside for its maiden flight, you’re going to have to summon your inner crafter and get creating the planes. The Invader is the beginner template whilst the Nakamura is the advanced, and there is a difference in the degree of difficulty between the two. You’ll need to set anywhere from 5 – 10mins aside for the paper build, perhaps a little longer for the first one.

The good news is that if you do get stuck or just learn visually, then PowerUp Toys have a set of instructions, templates and YouTube videos that you can look at to get going. Great support.

After that, you’re good to go. Slide on your flight module, turn it on using the small switch by the aerial, and then load up the PowerUp app to connect to the unit. Connect is almost immediate, and the application has a number of simple settings to control rudder trim as well as thrust. There’s also a flight assist module that somewhat determines your movements for you, and is great for first time flyers.

So how do you actually fly the unit? The same as you did back in the good old days….throw it! Once thrown, it will, it built correctly, respond to your smartphone movements and you can keep flying it for a period of time. During testing we managed to get a good 30 second flight, and that was after only 2 minutes of getting to grips with the unit itself. Considering the build, that was quite something!

Is this a gimmick, or is this actually worth getting to have a bit of a play? The answer is, truthfully, both. There’s a certain nostalgia to playing with paper planes, whilst a little more refined than the conventional builds. The ability to control your creations via your smartphone, and you can create whatever you want…there are tonnes of other templates, is something that we found particularly fun, for a short time. Longevity is going to vary from consumer to consumer but we revisited this unit a week after to try some custom creations and still found it fun, albeit we can see this not lasting too much longer.

Flight time of around 10 minutes per charge isn’t to be sniffed at and we actually found it relatively easy to control. Some builds react better than others, and there is some mileage in using slightly thicker paper for some builds to ensure rigidity. Just don’t fly it near any water…..broken a21rrow!!!

The PowerUp 3.0 is available from MobileFun for £29.99, and for that price, it’;s a nice stocking filler that will see them through until January at least! 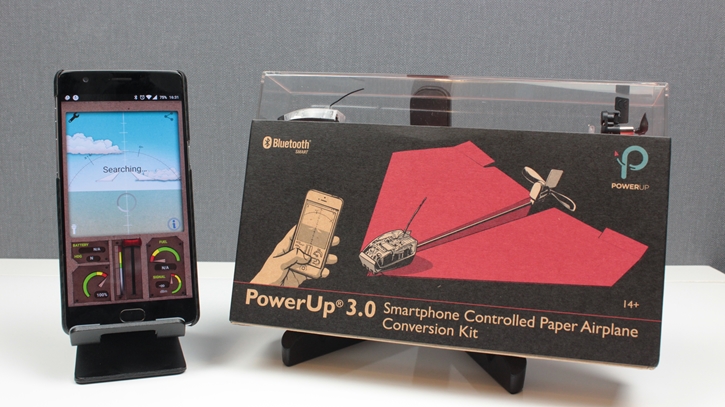