Protecting my phone from drops is something I’m always worrying about while buying a new phone. Usually I tend to go for the more protective cases, with currently the Spigen Neo Hybrid as my daily case for my OnePlus 3. Let’s see if these cases from Poetic, a case manufacturer based in San Francisco, can compete with it.

First of all, I would like to thank Poetic Cases for providing the cases. As with all my reviews, the company providing a review sample has no influence on the outcome of this review. 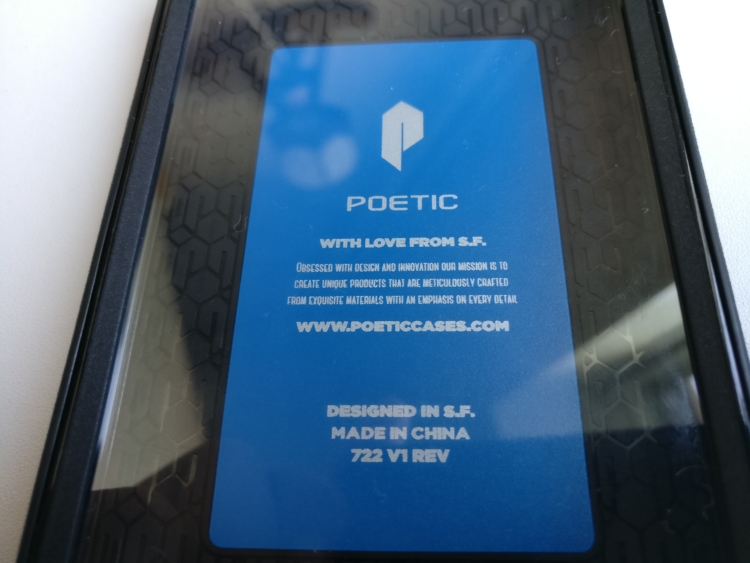 In this review, I’ll mention two separate cases, the Poetic Affinity and the Poetic Revolution. Each part of this review ends with a grade for each case, which will give the average grades as being shown in the review box above.

Alright, there isn’t a lot to tell in this department for these cases…

I’ll be doing a two in one review for these cases so let’s start off with the build quality of the Affinity case. Damn, it feels so good. No stupid edges that makes a case feel cheap. It’s really sturdy, bending isn’t going to happen, but why would it need to. You would expect to feel, or at least see the seams between the clear polycarbonate and the black TPU. But this really isn’t the case here, it’s very smooth. One thing I do want to talk about is scratches, because I was planning on doing a scratch test, but after two days of just using the case I had seen that it wouldn’t be necessary. Scratches mostly exist on the bottom and top. Something like this is to be expected with clear cases, but this fast?! In my opinion you can’t ask for more at this price point. This case certainly earns a 7.5 out of ten for its build quality. 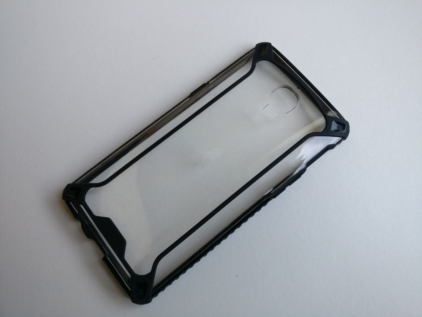 In the days after using the Affinity case I used the Revolution case, and Poetic has done a damn good job in terms of build quality. Everything looks like I would like to see it. From the back to the front. This case didn’t get any scratches during the testing period, and as this isn’t a clear case scratch tests aren’t really needed. Everything is smooth, rounded. If I would need to put a grade on this case, it would get an 8.5 out of ten for the build quality.

This is the reason why I’m buying cases. I’m not regularly dropping my phone or whatsoever, but just in case I do drop it. When I saw the Affinity case online I expected a really protective case, as the corners look robust and the sides look to be made out of a really flexible material. But it isn’t, the corners are made out of a hard polycarbonate material, and the sides are indeed made out of TPU, but once that almost flexes as much as the back of the case does. If you feel on the inside of the case you’ll feel some more flexible TPU, but I still wouldn’t want to drop my phone using this case. And although I would love throwing around with phones, this is my private phone which I’m not going to throw around for the sake of testing. I would give this case a 6 out of 10 in terms of actually protecting your phone. 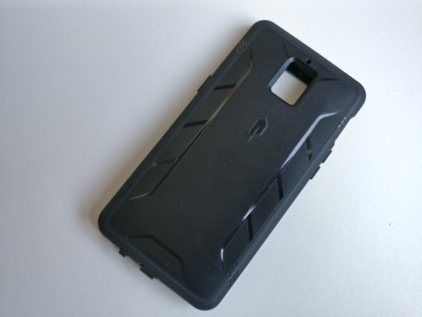 Next is the Poetic Revolution case. Coming in at a hefty 200G, making your OnePlus 3 almost 400G after applying the case. While the Affinity case doesn’t give me the feeling that the phone is being protected, this feels like my phone can’t break, no matter what happens to it. And similar as with the Affinity case, I haven’t been throwing around with it. It did drop once, on grass. Nothing happened, the case was a bit dirty but that’s all. If you need something really protective, go for this one. It’ll give you everything you need and more. I would give this case an 8 out of then for protecting your phone.

Protecting your phone is one thing, looks is the 2nd most important thing when looking at new cases. At least, it is for me. The Poetic Affinity offers a clear polycarbonate back, making it possible to show your phones look while the case is on your phone. Mixed with the black sides and the black lines on the back makes for a case you don’t need to be ashamed of having on your phone. Definitely something I would buy myself, and would be able to recommend to others out there. Grading a specific design is hard, and as I’m trying to be as unbiased as possible, I’ll be giving this design an 8 out of 10. 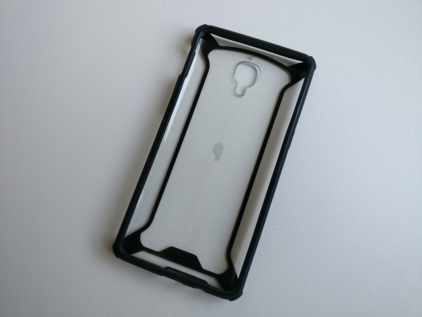 The Revolution case is something totally different, design isn’t important, or at least. If you buy such a case, design isn’t the 1st thing you’ll want to take a look at. And even though the design of this case isn’t anything special, it just looks fine. The shiny lines on the back, together with the matte black finish of the polycarbonate give the case a different look than the regular cases you see all over the place. And although this isn’t the best-looking case out there, it does its job. And it does its job just fine, earning a 6.5 out of ten for its design.

This is mostly about the cut-outs, and buttons of the two cases. Start off with the Poetic Affinity case, all the cut-outs on the bottom look just fine, the cut-out at the 3.5mm jack is nice and big giving you plenty of space for even the bigger headphone jacks. The Dash-charge cable fits in with more than enough space left on all sides. The speaker grill cut-out could’ve been a bit bigger. But then again, there’s nothing really wrong with the current set of cut-outs. The buttons, yeah… The power button is pretty good in terms of the tactile feedback. But the volume buttons feel a bit mushy, or at least one of them… Really annoying? No. Now we’re talking about the volume buttons, let’s go a bit more to the top. The cut-out for the notification slider is the best I’ve had yet. Making it very easy to get your finger at the place where it needs to be. At last, we’ve got the camera cut-out, which is …. just fine. This case gets an 8 out of ten for the cut-outs and buttons. 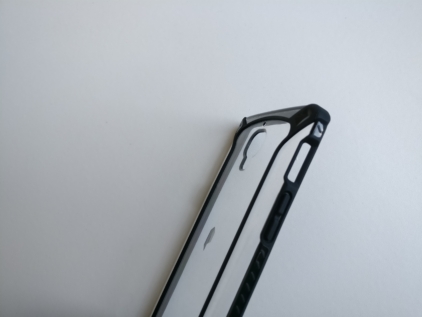 Next stop, the Poetic Revolution. It shows how different two cases can be from each other. The thing I really hated about this case were the covered cut-outs on the bottom. It makes listening to music and charging your phone a pain in your butt. And it’s guaranteed that the flaps will fall off after using them for too long, if you haven’t taken them off yourselves yet. The cut-outs for the alert slider and the camera were once again just fine. The power button was surprisingly tactile, while the volume buttons felt a bit too mushy. Nothing out of the ordinary for such a case though, I wasn’t expecting anything to be tactile. On the front, we’ve got the screen protector, yeah, no. Please, manufacturer’s stay away from making cases with built-in screen protectors. As there’s some space between the case and the display, you’ll feel that every time you touch the screen. And although you get used to it, I would rather not… This case certainly isn’t the best in the functionality department, and only gets a 5.5 out of 10. 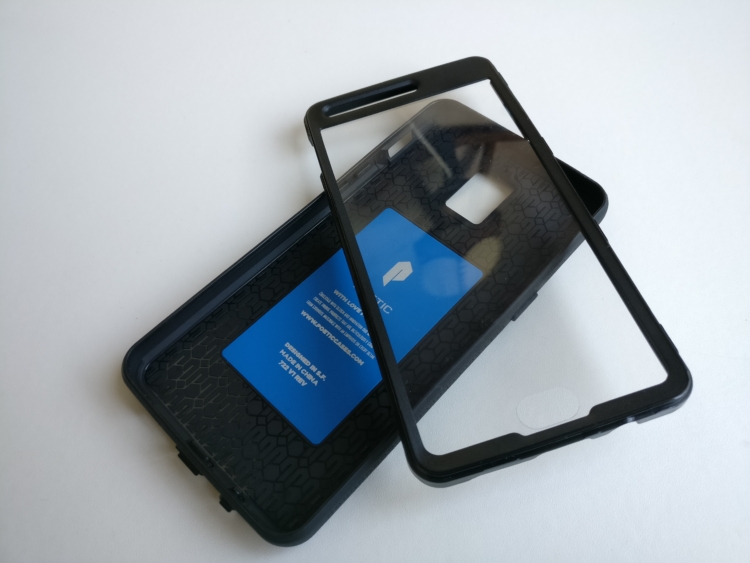 Writing a conclusion may sound easy, but it certainly isn’t. Especially with a lot of things to take into account after a lengthy testing period. The Poetic Affinity is a case which I started loving more and more during the review period, and I may even start using soon after all of my case reviews are done. It combines a good design with moderate protection, making this into a case which attracts a large audience. Like to show off your phone? Like to see your phone yourself and still have some protection? You’ve reached your destination for just $13.

Now lets wrap it all up for the Poetic Revolution case, also the more expensive case coming in at $17. Protecting your phone is its goal, and it certainly protects your phone in every single way possible. And if you haven’t got a screen protector applied you’ll be happy to learn that it comes with one built-in the case. It doesn’t offer the best design out there; neither is it the best case in the functionality department. It does work fine, and if you need your phone to be protected by a nice feeling ‘brick’, this is the only case out there besides the Tudia Omnix case. 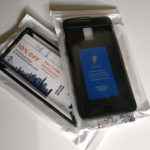