Optoma is a name synonymous with projectors, and for good reason, they’re damn good at making them. The HD28DSE I reviewed a while back was a high-end, home theatre projector, and what I’m reviewing today could not be more different, it’s a small, light ultraportable LED projector instead of a lamp based one, and guys, this is the future.

Disclaimer: Optoma sent me this ML750st for free to review, but they have not paid us for this review, nor do they have any control over the editorial outcome of the review. The ML750st was used for about 3 weeks and was used in multiple scenarios, but primarily as a TV replacement. 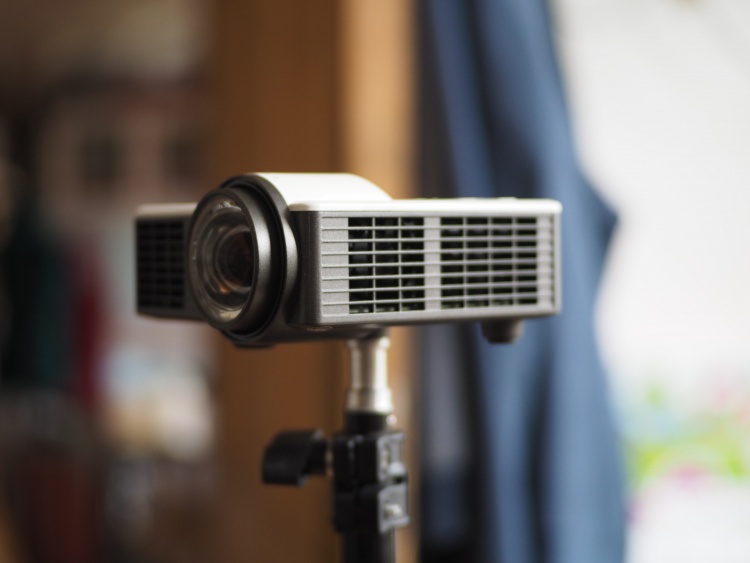 For a more extensive spec sheet, head on over to the Optoma product page here 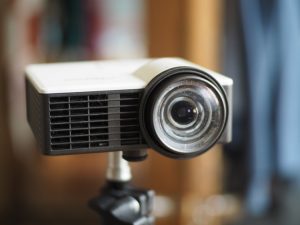 There is only one word I can use to accurately describe the external look of the ML750st, and that word is adorable. This teeny, tiny, literally handheld sized projector weighs almost nothing and actually comes in a carrying case, it’s so 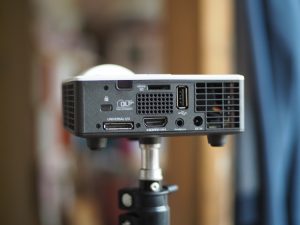 bloody adorable I just let out a little “aww” when I opened the box for the time. I knew it was going to be small as I had read and visualised the dimensions, but still, I was shocked.

The small, white box paired with the hilariously oversized fixed lens also makes the ML750st seem less endearing. The white top houses the controls, a power button, a 4 way directional pad with a select/back button in the centre. A contextual menu button along with a brightness and volume button round out the controls. Flipping to the back we see all the I/O, and there is a surprising amount for something this small, you get full-sized HDMI 1.4b that has the MHL protocol as well, meaning you could plug a smartphone that also has MHL support in and mirror the screen. There is also a MicroSD card slot, a USB2.0 port and a “Universal I/O” port that comes with an adaptor in the box to adapt it out to VGA, for those times you just need VGA, for an older work laptop maybe. There is also a standard DC in port and a 3.5mm audio jack, to plug in better speakers than what the ML750st provides.

On the bottom we have 3 small adjustable feet, and, my favourite part, a standard ¼” Tripod threading, meaning you can plonk the ML750st on a projector onto any flat surface, and boom, portable cinema! Or you can do what I did and jerry rig some threaded rod and some wood into mounting the ML750st on the wall projecting onto the ceiling for a ceiling cinema, and yes, it is just as cool as it sounds. 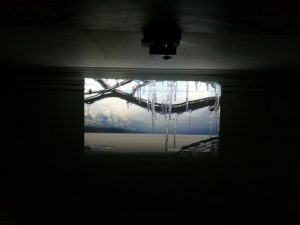 As I stated, I mainly had the ML750st installed on my wall and tried to replace my TV with it, but I also took it with me once to a meeting. In the meeting room I projected onto the whiteboard from my laptop, and fired up the subject of that week’s Meeting for my colleagues. This shows the versatility of having a projector this small, I just threw the ML750st into its carrying case and put that in my bag, it barely added any weight and made the day a lot more fun.

So how was it in a more permanent installation, well actually even better. Let me start off by saying that no, you probably shouldn’t be buying this to replace a TV, unless you can live with a Single HDMI or don’t mind getting an HDMI switch,
it also doesn’t have an aerial in port, but I did it, I plugged my Chromecast into it and got power from the USB port, so the Chromecast benefited from powering up when the projector powered up, and I tried to, as much as possible, only use the ML750st whenever I wanted to consume large screen media, and it worked so much better than I was expecting it to.

There were two things that were somewhat scaring me for this test, One was the fact that, as most, the ML750st can “only” output 800 lumens, which isn’t all that much when the HD28DSE I reviewed a few months back had 3000 Lumens, but due to the fact that the ML750st uses LED bulbs instead of a lamp that has to ramp up, the ML750st is super bright, and runs a lot cooler than any other projector I’ve ever tried and it doesn’t have to ramp up, so for the first five or 10 minutes the colours aren’t that great, on the ML750st, they’re on or off, and I got really spoiled by that. 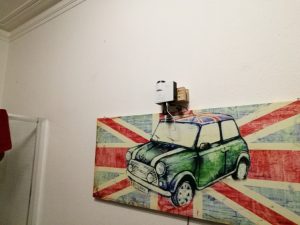 The second issue I had was the resolution, at a native sensor resolution of 1280×800, which I had in 1280×720 16:9 mode, I’d have thought that at 90” (which is roughly the size of the projection on my ceiling) that everything would look a little Minecraft-y, but I am glad to say that I was wrong, the only time the resolution was a problem was when my network was a little congested and Netflix dropped down to SD, but any HD content, whether it be a Blu-Ray rip from your NAS or a YouTube clip of a kitten, will look surprisingly good on the ML750st.

Circling back around to brightness, I’d like to also point out that using this as my main large format media device meant watching content in bright or light environments as well as dark ones, and once again, I was so surprised that the 800 lumen bright mode wasn’t even a necessary change to watch media on the ML750st during the day, this goes against everything I thought I knew about light and projectors, the plucky little Optoma knocked me on my ass every time and then handed my jaw back to me every time it fell to the floor.

There is a speaker built in, but it’s not the best, think of it as a mid-range smartphone speaker, just in a slightly bigger space so it’s got more room to amplify the sound. It’s not a terrible listening experience, and when It was on my wall, it was the only sound source I had as I couldn’t wire up a soundbar to it due to time constraints. It’s a little tinny, it’s a little thin and there is pretty much no bass, but it’s not unbearable.

Luckily, because of the 3.5mm audio jack, any standard speaker setup or headphones can be plugged into the ML750st for you to have as minimal or as complex a setup as possible be it a 7.1 surround sound setup or a cheap soundbar, the choice is yours. 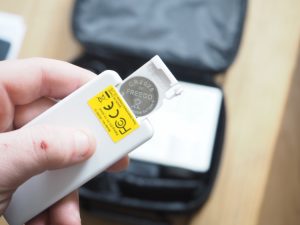 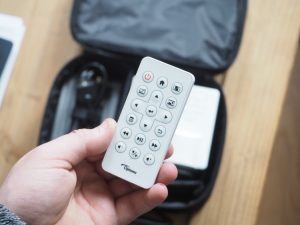 This is the one part of the ML750st I wasn’t a fan of, the remote is small, but feels cheap and nasty, obviously you aren’t meant to use it a whole lot, but still, it is the one thing that detracts from making the entire experience feel premium, and at what Optoma are charging for the ML750st, you’d hope it feels high-end

The other issue I have with the remote, apart from it not feeling all that great, is that it doesn’t support HDMI CEC (consumer electronics control) meaning that I couldn’t use the ML750st remote to pause youtube or netflix, I had to resort to using the phone, which, as I’ve said multiple times in the past, is sometimes less than ideal. 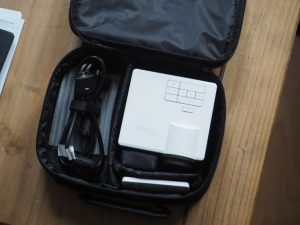 So, after the 3 weeks of testing, how was it only using a projector to consume media, and not just a projector, but a ceiling firing projector? In one word? Awesome. Laying down in bed, flat as a pancake, with no arching my neck or back, no tension anywhere, just looking straight ahead and seeing a roughly 90” image, that is crystal clear, that has awesome colour reproduction is surprisingly bright that I can cast to is just insane. I have watched so much Orange is the new Black on my ceiling. I have consumed so much YouTube in bed and time absolutely flies and you are so relaxed, I was honestly devastated when Penny hit me up asking for it back.

So should you buy one? Honestly, yeah. £470 is a lot of money, there is no way around that, especially when you can buy 4K UHD TVs for about £400 quite easily now. But those aren’t as easy to transport as this is, those aren’t going to be as small or light as this is, they’ll be far less flexible and they can only be one size. Try looking at how much a 90” TV costs, or round about that much. The fact the ML750st looks so good in a dark room, in a bright room, on the wall or even on a glossy whiteboard, probably the worst surface to project onto, shows you just how damn good this is.

Optoma’s name is synonymous with projectors for a reason. They’re bloody good at making them. 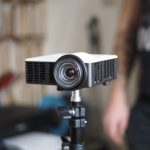