Summer is coming. Whether you look out of your window and believe that or not, technically it is just around the corner. Many a sun-seeking Brit will be flying our to exotic places and bathing in cool pools whilst their BBQ slowly sizzles. What’s missing. Banging tunes! MobileFun has you covered with the Olixar Boombrick.

We won’t apologise for keep looking at different Bluetooth speakers. We’re just like you; we want to find a flawless example of battery charged musical goodness. We’ll keep reviewing devices and seeing how they improve the and additional features they deliver, and ensure you have our opinions to hand. With that in mind, we hit up Mobile Fun for the Olixar Boombrick. What makes this device different? Well it has a relatively unique grill, and it’s quite a blocky unit reminiscent of an old boom box, but the name “Boombrick” caught our attention. Many Bluetooth Speakers quite happily get loud, and even manage some half decent sound, but few provide representative lows in their output. We were hoping the Olixar Boombrick lived up to its name in that regard.

As you can see from the video, it’s a black, well, brick isn’t it? The material is a soft touch plastic with a metallic grill on the front in an abstract shape design which is quite distinctive and kind of looks like metallic graffiti through squinted eyes. Across the top edge are the control buttons. Plastic with a little wobble, they get the job done. That job includes track skip and repeat buttons, volume up and down buttons, and an on/off button which doubles as a call answer and play/pause button. Alongside the on/off button is a pinhole microphone for communicating during those calls. Only a subtle Olixar branding can be seen above the control buttons. 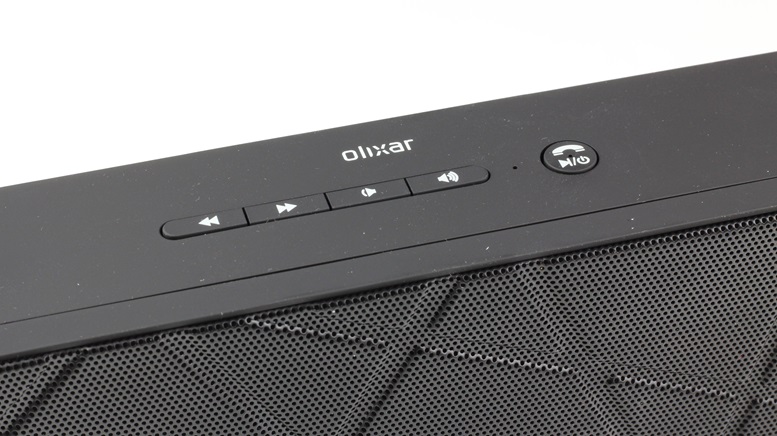 The left and right side of the device sees nothing but more soft touch plastic, however the bottom edge has two large rubber feet at either end of the device to secure it to a flat surface. On the rear is the micro USB charging port, and a 3.5mm audio in for auxiliary playback.

We’ll cut right to the chase here, this has great bass for such a small unit. You’ll hear that when you listen to the clip below (recorded with a Huawei P9 incidentally). It’s not flawless by any means, but it is punchy and gets reasonably loud without distortion.

Sample from the @olixar #Boombrick ….spoiler alert..it lives up to its name #sharing

There’s no point going into the audio to any huge degree as it’s certainly not audiophile grade, but what it does do, it does well. Punchy bass as previously mentioned, is complimented with a rather nice flat sound in other ranges from the two 3w drives, which is a great starting point for EQ tweaking in various apps. It’s not the “Beats” for Bluetooth headsets. It actually has some treble with snares coming through particularly well in the songs we tested with.

The rubber feet also do as promised and keep the unit from moving, no matter how loud you crank it.

Taking a step back for a second, the pairing process is as easy as you’d expect for units of this type. Turn on the device, search for it from your phone/tablet, and pair. There’s also the option to use the integrated 3.5mm audio jack to play music via the headphone jack on your device.

The sound is crisper via the 3.5mm audio jack, there’s no denying that. There is less noise in the sound but that might be a device-specific scenario. Either way, it’s not so much better that we’d advocate always tethering your device via the aux cable; Bluetooth is more than acceptable for most use cases. Let’s be clear here, there is little chance of consumers wanting to use this for anything other than poolside or BBQ’side (is that a phrase? It is now!) entertainment. For that it’s absolutely fine. 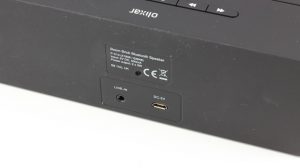 The buttons, as mentioned earlier are a little wobbly but all work absolutely fine. The clicky nature of them means that you’re never left in any doubt of the button you’re pressing, and this actually helps when taking calls on the device.

Speaking of, you’re not going to be holding any kind of enterprise-class conference calls on the Olixar Boombrick, nor should you be expecting to be. In our testing the calls were fine, but nothing more than that. Some came off a little muffled, and others said that we sounded a little “lost” as though we were in the background. The microphone isn’t the best, but it does easily get the job done in a quiet scenario.

The built-in 1200 mAh battery is good for around 7-8 hours of continuous playback according to our testing and will recharge in just 2 hours with the right AC charger. We expected a little more out of the battery, but in truth that’s a day’s sun bathing, or a night’s entertainment, so we’re good with that performance.

There are many cheap Bluetooth speakers on the market. Many are cheaper than this device but many also fail to deliver any sort of bass to the table. This isn’t a boombox as the name might imply, but it does deliver better than average small-form-factor-device bass, and at an acceptable volume, and a good price point. Just £19.99 from our friends over at Mobile Fun isn’t to be sniffed at.

If you’re looking out for something portable to take away with you, or stick outside on those long sunny (yeah…honestly) nights when having friends over, this won’t disappoint and with its 7-8 hours of continuous playback, you won’t be left with any awkward silences either!