Philips 499P9H Review: Super Ultrawide Might Be Super Over The Top

Let me start this by saying, I know this is ridiculous. Most people think 21:9 is really wide, but this is the literal equivalent of 2 27” 1440p glued together without a bezel, and whilst that is really wide, in some cases, I’m not sure if it is wide enough. 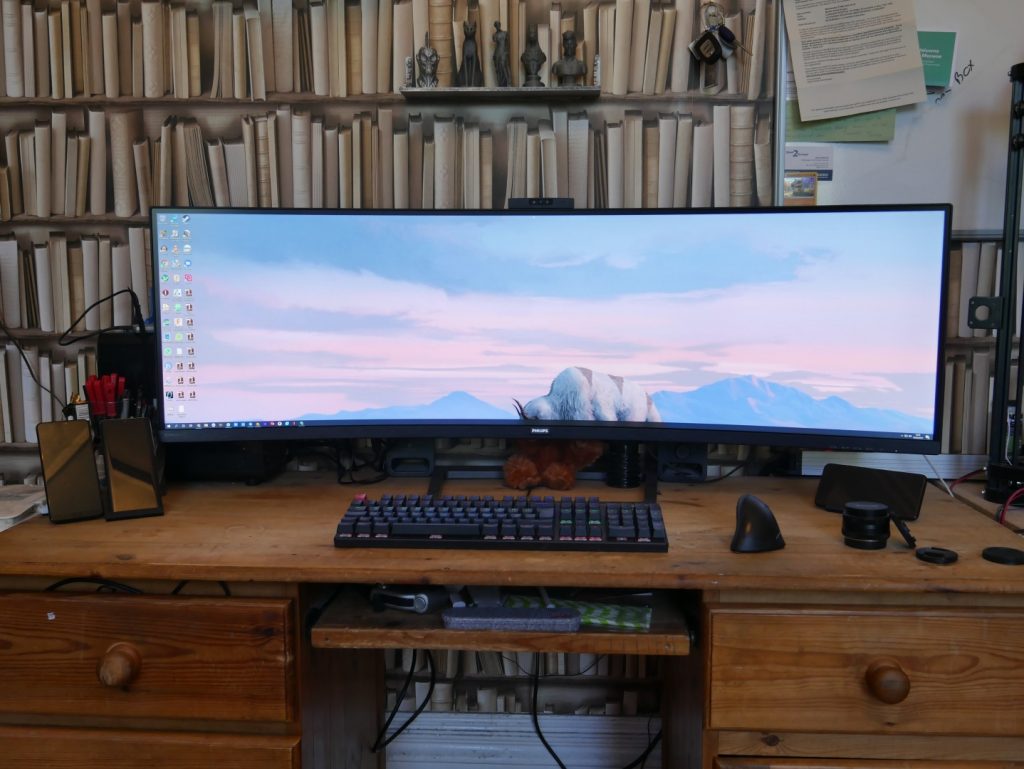 Disclaimer: United Communications, Philips’ PR company provided us with the 499P9H to review, no money has exchanged hands between either company. This review is being written after 3 weeks using the 499P9H as my primary monitor on a Windows 10 PC.

For a more comprehensive list of the specifications, head on other to the Philips webpage for the 499P9H Here

The 499P9H is an absolute beast of a monitor. The box it comes in is monstrous, it’s almost as tall as my (admittedly short) mother. The box weighed almost 22kg, half of that, half, was the monitor itself, and that doesn’t include the stand, the stand is another 4kg, dang. 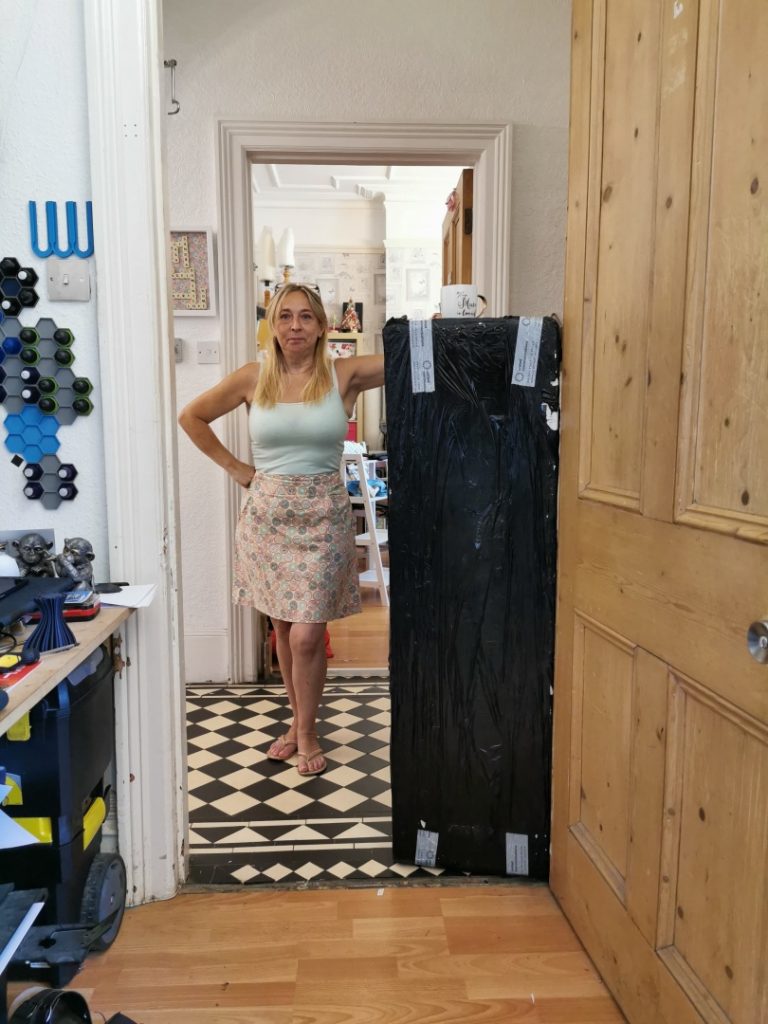 When it came to getting it out of the box, that was another issue entirely. I had to do it on my kitchen table as 1) I hadn’t cleaned my office yet and 2) I wasn’t sure if it would even fit on my desk. Crisis averted and I had one of the largest monitors I had ever seen on my desk ready for use and only then had I realised just how attractive the monitor was, it was very understated, nothing flash, nothing over the top. The front bezel has a brushed aluminium look to the plastic, the panel itself is actually inset from the edge of the chassis, like what Asus and LG have been doing. The rear is matte black plastic and the stand is a dark gunmetal grey, in what I assume to be aluminium but could be steel due to the sheer heft of it. 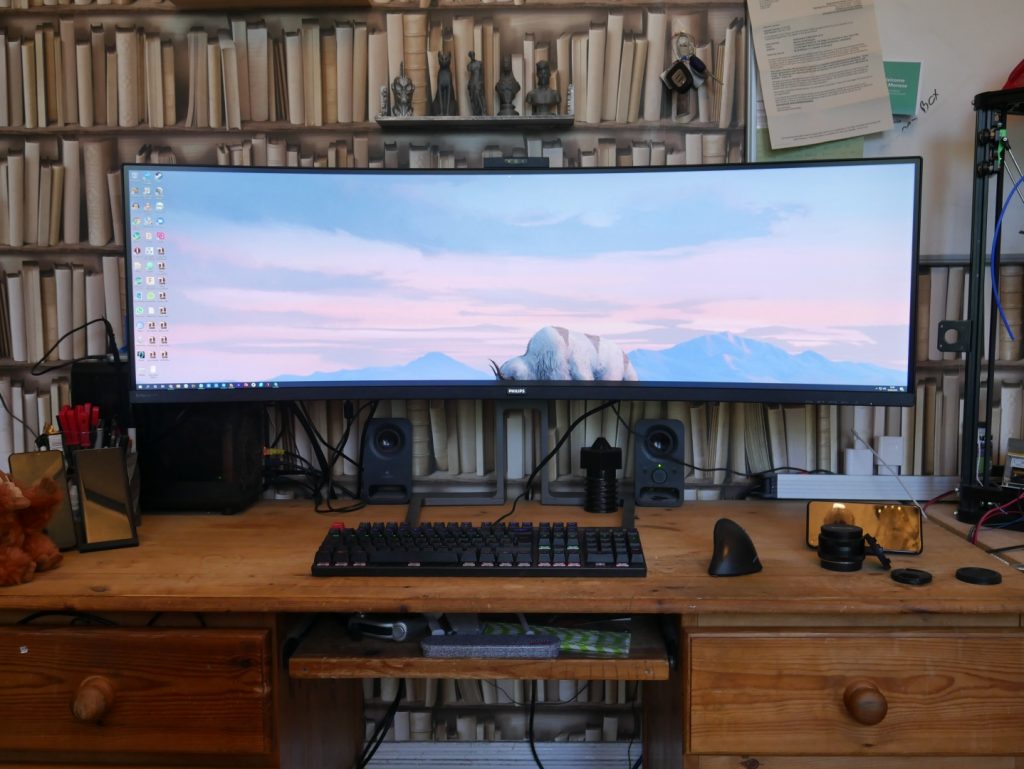 Looking at the monitor head-on (as difficult as it may be to get it all in your field of view) in the bottom right we have the OSD buttons and an LED next to it. On the top of the monitor almost directly above the Philips logo is where the hidden Windows Hello webcam is located, it is a spring-loaded mechanism that then has a pivot to angle the webcam up or down depending on where you sit. 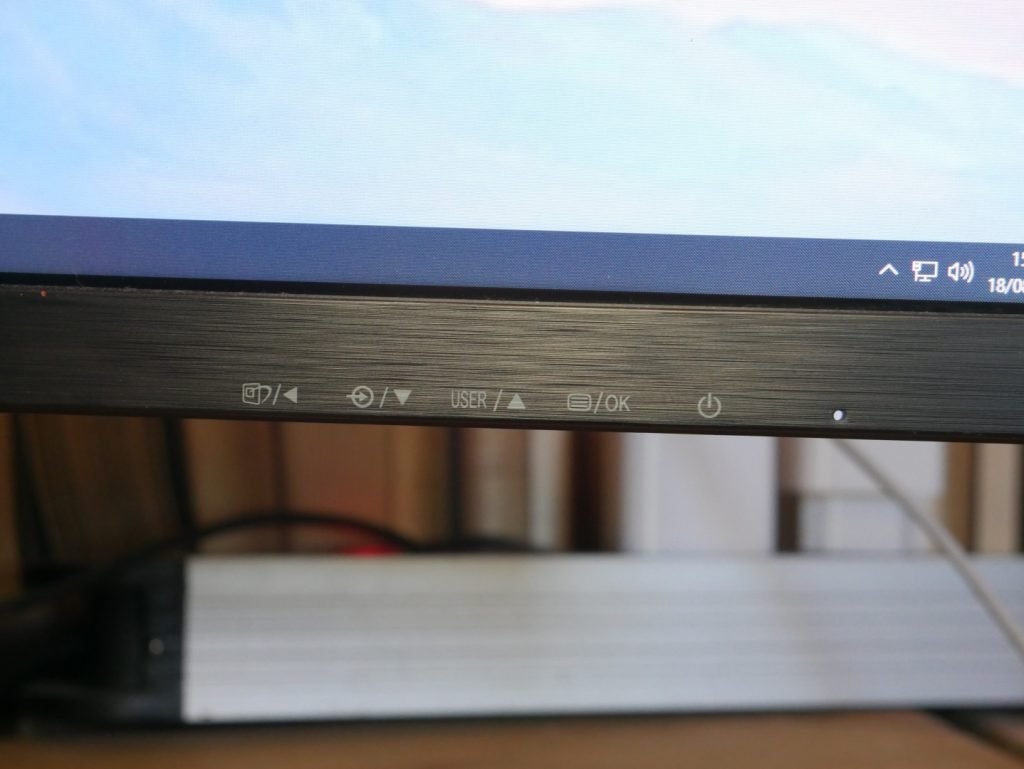 Looking at the I/O, I’m pretty impressed here. We have a very nice port selection, but I would have liked a second DisplayPort if I’m being picky. But DisplayPort 1.4, 2 HDMI 2.0 ports and a USB-C port that has a USB-C DP alternate mode is nice, as well as a USB hub. I never had the chance to use the RJ45 ethernet jack, as the main PC this was plugged in to is already plugged in to Ethernet  and the router/AP lives on top of that PC, so anything else I add to this monitor to use was close enough to just use WiFi and get great speeds. 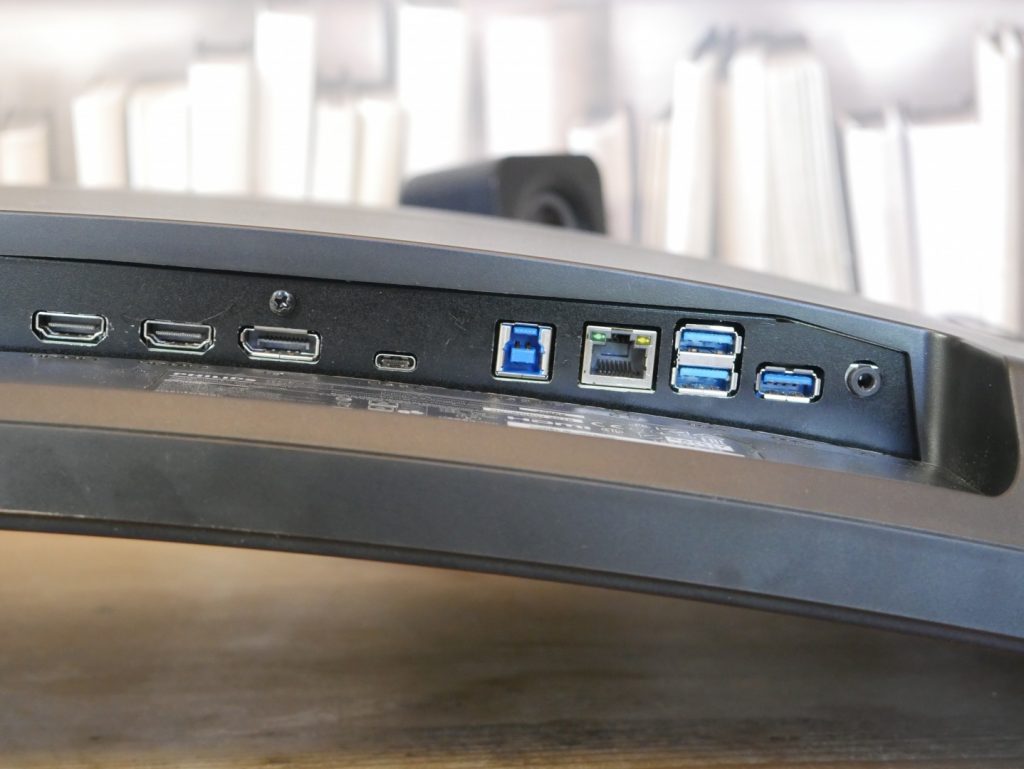 Back to what I said in the beginning though, about this maybe not being big enough, it sounds crazy, but hear me out. A lot of people who use multiple monitors use a triple display set up, a single central monitor for main work and two ancillary monitors for other works. The 499P9H is effectively 2 monitors side by side, which means if you do a side by side snap-in windows, you get 2 perfect 16:9 applications open, but neither is centred so you either use everything full screen, which looks ridiculous, you snap 50:50 and just look at one side predominantly, or you do what I did and virtually split the monitor vertically into quarters. So my main window takes up the middle two quadrants, and I have two ancillary applications in the surrounding quarters. If we went wider to 48:9 it would be 3 displays side by side, which would make more sense, but given how heavy this monitor is, how much desk space it already takes up and how expensive this monitor is, I can’t imagine that happening soon.

This is, unfortunately, going to be a bit more scant on details than I would like. I am in the process of acquiring some monitor testing equipment, to test peak luminance as well as colour accuracy to make my monitor reviews more accurate, but until then, all of this is subjective. 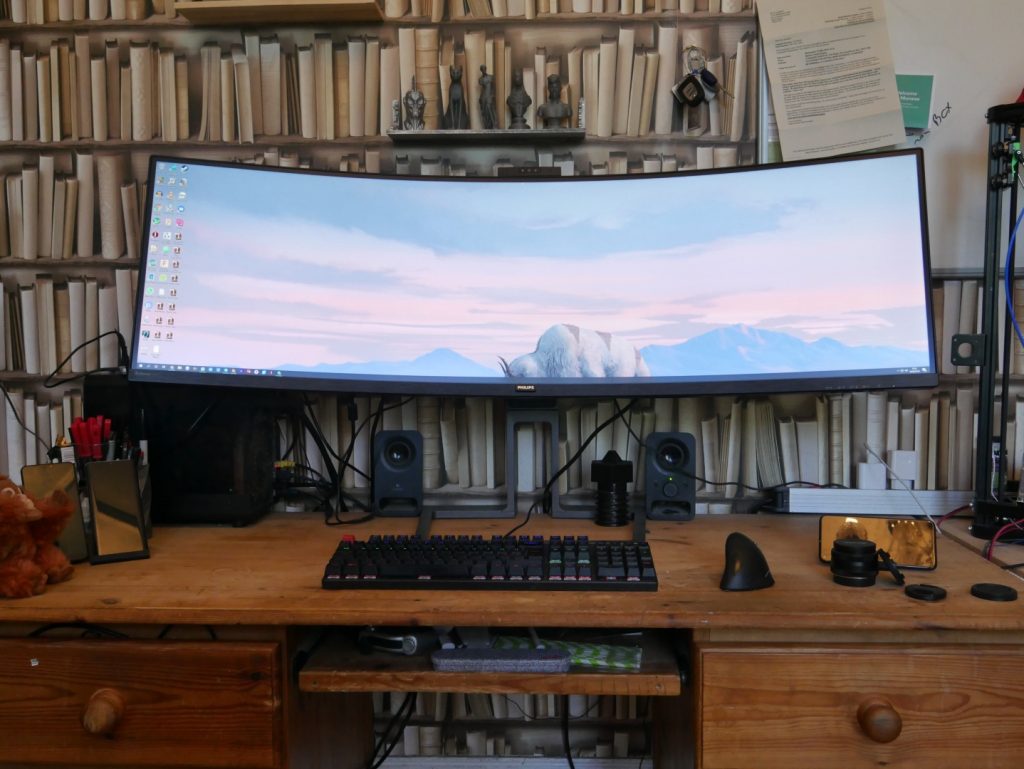 Let me start with the resolution, as I think this is important but also going to be contentious, I think that 5120×1440, what this monitor has, should be the absolute minimum for this type of monitor. Other companies sell this type of monitor with a 3840×1080 resolution and stretched out to 49” diagonally, there just aren’t enough pixels to have an adequate viewing experience. Secondly, I want to mention the curvature. Whilst I am not a fan of curves on TV’s, on computer monitors they make a lot more sense. Computer monitors are usually solitary, it is only you looking at it, and something this large having the edges curved in towards you makes something this size feel a lot more usable, and the 1800R curve is a lot more aggressive than the 3800R curve that some smaller monitors use, but once again I almost think that this is too subtle, maybe taking it to a 1400R or 1500R curve would be better so the edges feel a bit closer to you.

The panel that Philips has chosen here has a lovely matte coating, which is incredibly useful to me, as the way my office is set up directly behind my chair is two 80cmx200cm windows, so a lot of light happens to come into this room, but the matte coating paired with the claimed 450nit brightness, I can say that I have been very impressed with the visibility of this monitor in what I consider to be a pretty harsh environment.

Colour-wise, Philips claims this to have a DeltaE of less than 2 which is generally considered accurate enough for average human vision, though once again, without the proper equipment I cannot test this claim. Another feature that Philips state is VESA HDR400 support, and much like Tim Schiesser from TechSpot (and Hardware Unboxed) I really don’t consider any LCD under 1000nits with FALD to be HDR, so VESA HDR400 and HDR600 and just nice bright monitors with wider colour gamuts, but I don’t truly class them as HDR.

Problems do arise when making panels this large, and the 499P9H is no exception. My particular panel does have some ”hot spots” and light bleed when displaying black or very dark images, and uniformity when displaying a full white image isn’t the greatest. I am unsure if these issues are made worse by the curve, but until I know for sure I cannot blame them on it. Whilst I didn’t notice these when looking for them, in normal use it was really hard to notice anything wrong mainly because of the sheer size of the monitor and the aspect ratio.

Most video work is mastered in 16:9, most cinema wide stuff is 21:9 and there are some a bit wider and some less so, but even a cinema wide movie doesn’t fill up the entire screen, and you’d think it’d be easy to notice because then those areas would be black, but it isn’t, because you are hopefully focussing on the content instead.

Now onto the miscellaneous stuff, mainly how the Windows Hello webcam works, the built-in multi-display picture by picture settings and lastly how Windows sucks when it comes to monitors this wide.

The quickest and easiest one to talk about is the Windows Hello webcam, and to be honest, it’s been pretty great. I had a little issue the first few days where although Windows would notice the webcam and could see it in the camera app, the Windows Hello portion wasn’t recognised, so I couldn’t set it up. Thankfully after a few days, it resolved itself. Unfortunately for me, Windows Hello relies on IR cameras, which are messed up by bright light, such as daylight, that I happen to have plenty of behind me, absolutely blowing the sensor out and anything after 10 am and before 7 pm has a very hard time. But seeing as it works without intense daylight, it’s hard for me to blame it on the camera. 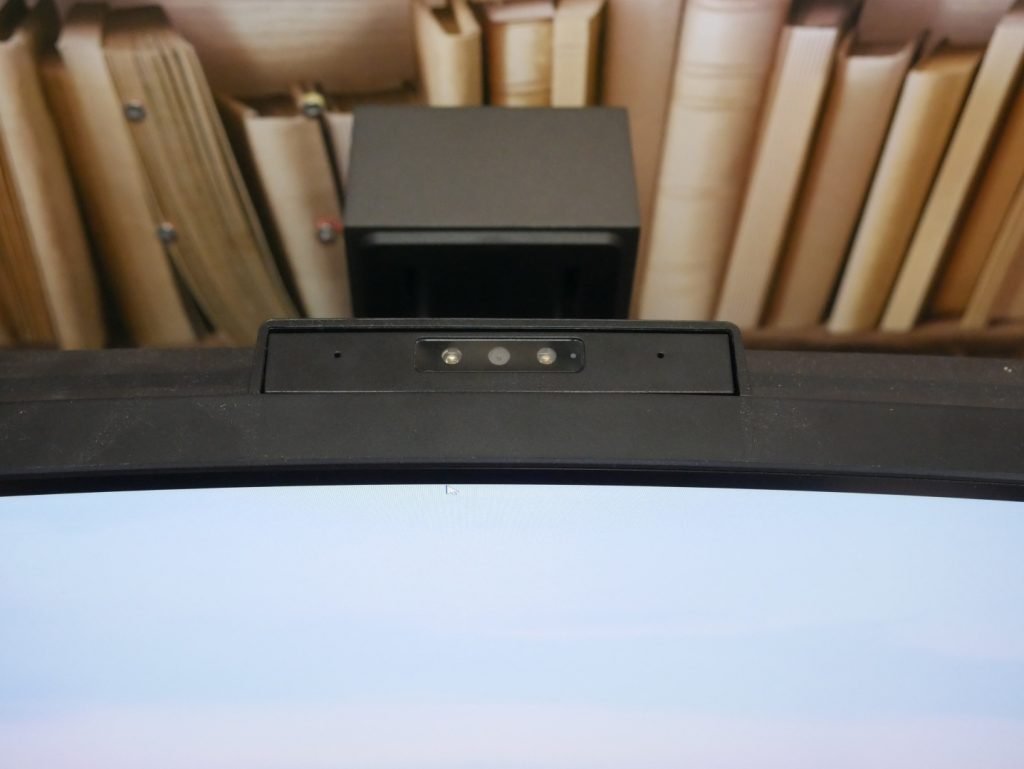 Talking about the picture by picture support, this mostly worked, but only after some tweaking in Windows to get it to fully work at 2560×1440, it was rendering a 2560×1440 window but in the centre of the half screen, it was weird, but I went into Radeon settings and turned a few knobs until everything worked. I did have a few issues with the KVM on the Monitor until I realised that I was using it incorrectly, you have to manually switch between the devices you want to control via the OSD on the monitor. Whilst I would prefer this to be more automatic, it wasn’t that bad once I had figured out that If I wanted to use the keyboard and mouse plugged into the monitor on my second input (for example my phone plugged in via USB-C) I just had to swap the KVM output to the USB-C port.

Lastly is the fact that Windows sucks at snapping on a screen this wide, and honestly, Windows’ snapping hasn’t really adjusted with the ever-widening on screens. Windows has 2 major snapping modes, 50/50 or 1×1, and quarters or 2×2. You can mix and match and have 2  quadrants and then the other half with a single app. But on Ultrawide this got more complicated and on this 32:9 monitor I just want more choice. I want to be able to have a 4×1 or just more than what is currently available, you have to either go find weird apps online to help you do this, or meticulously set up your own windows, and it is a chore.

So, what can I really say about the 499P9H, it’s freaking awesome, it’s huge, it’s heavy, it is magnificent and I love how ridiculous it is. But I think it is for a very niche type of user. It is for someone who has a lot of desk space, a fair bit of cash and a workflow that can either properly take advantage of 32:9 or is willing to spend the time making their workflow fit.

Do I like this monitor? Of course, I do, but at the same time, I also miss my 21:9 monitor. Although things like video editing is stunning on this, it’s also absolutely bonkers, I also would rather have a single ultrawide or a triple-wide setup, a dual monitor setup has never appealed to me, and a single monitor version of that doesn’t fix my core issues with the style.