Jackery has some really interesting offerings on the market, at least from my perspective. Therefore I reached out to them to get you a review of one of their power banks, the Jackery Thunder X. If you need some juice, this thing packs 20.100mAh of power…but that’s what Jackery is saying. How much of that is actually available makes it through to your device? Let’s dive into that matter right away…

Earlier on in November Jackery provided me with one of their power banks, but as always they’ve got no influence of the outcome of this review. Rest assured that everything in this review are my own views and opinions about the topics handled in this review.

This was the first time using such a long and slim power bank, which is really enjoyable especially if you haven’t got a backpack for your power bank alone. The first time I took the power bank out of the box it gave me a feeling of quality. Something I had felt before on other power banks, but this one is of course completely made of aluminium, the only exemptions are the plastic parts on the top and bottom of the power bank. 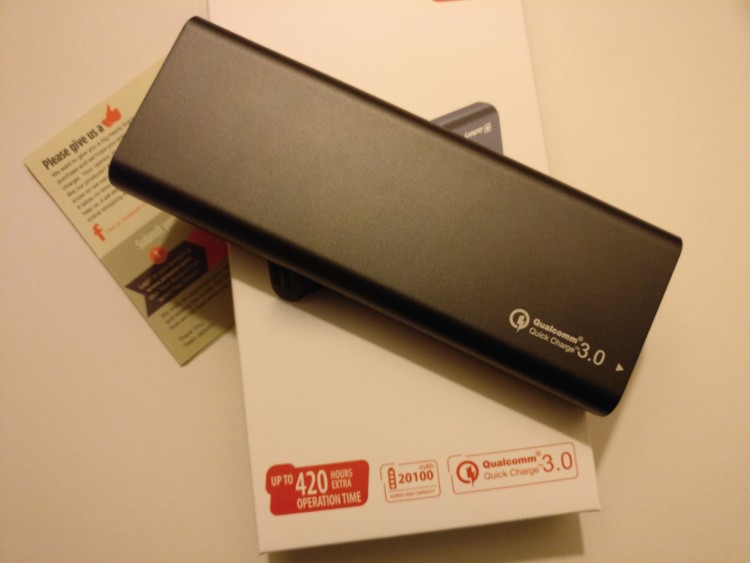 As this power bank is made out of plastic any form of movement simply isn’t possible. Besides that the plastic strips on the top and bottom feel secure and I don’t think it’ll scratch that easily. What I did notice is that the aluminium likes to scratch, especially if you’re moving it around on a wooden surface and of course if you move something made of metal across the surface.

Wrapping this part up, this power bank is certainly built really, really well. If you’re looking at its price and then look back at what Jackery offers you with this product you won’t be disappointed.

This is something that you’ll need to decide on your own; you’ll either love, hate or ‘just like’ it. I’m certainly in the first group. The metal body of the power bank with the blue/black colour simply looks stunning.

Next are the plastic parts of the device, and the bottom one is just boring markings from all kinds of certification agencies. On the top you’ll find the USB output and input ports, and I’m not totally sure why they went with this font, it looks really old and well…ugly compared to the rest of the power bank. 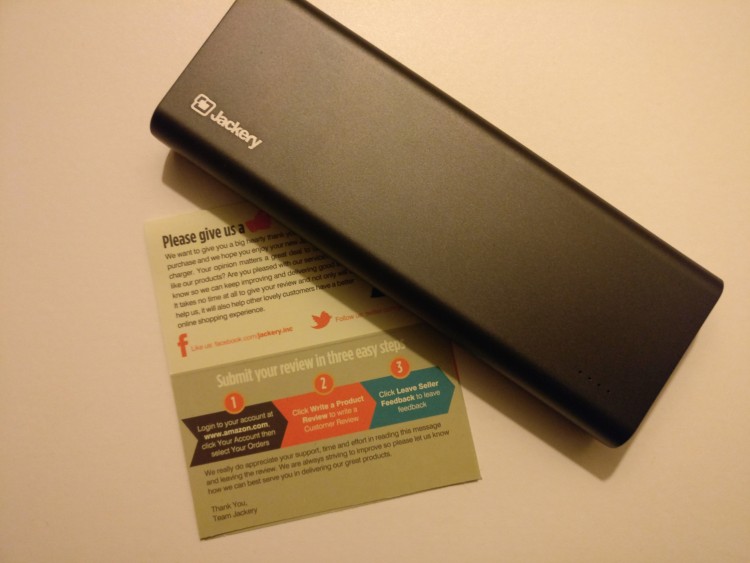 I would like to tell you a long story about its design, but there isn’t much to tell you here. It looks great, many power banks with a higher price tag won’t feature such an aluminium design. Well done, Jackery!

Jackery says the Panasonic battery cells used in this power bank have a total capacity of 20.100mAh. In reality the battery cells never have the same capacity as stated by its manufacturer. As usual I’m taking a look at a number that comes close to its original capacity, with the following testing procedure: I simply charged my OnePlus One with it until it was empty, which was within one full charge of my OnePlus One. It did get close to getting my phone charged. The power bank ran out of juice at 93% coming from 10% for the first charge, and with the 2nd test it did about the same charging my OnePlus One from 5% up to 90%. My OnePlus One has a 3100mAh battery, which is probably degraded after a year of usage. As it’s now certainly less than 3100 I would say that the battery can probably hold somewhere around 2900mAh. 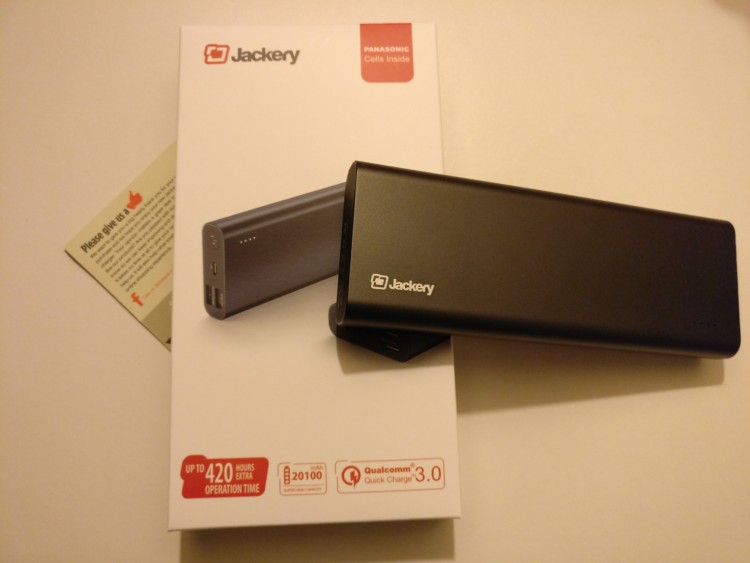 Before I started I fully charged the power bank and started discharging it right after it was full; with the following results: I’ve been able to fully charge my OnePlus One for about 7 times and 5% at the last charge.

I just said theoretically because it’s always a bit ‘weird’ with battery stuff, and I can’t find out how much power the battery in my OnePlus One can actually hold. Which means that I can only guess its capacity and try to calculate the amount being charged that way.

One last thing I want to note in this review is the heat being produced by this power bank while it’s charging my devices, or when it’s being charged. Not to say that this is a big issue, but as it’s fully made of aluminum you can definitely feel the heat.

That was it, my full review of the Jackery Thunder X. I was surprised when I took it out of the box, and I was even more surprised when I saw the final result of my testing. Are you looking for a serious charger with enough juice for the entire family… Look no further, this power bank not only brings you that, but also an amazing design and build quality. 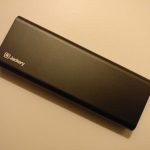