After having reviewed two speakers, the Oaxis Bento and the Leeron Outdoor speaker, before in the lower end of the price spectrum, it was a blast to review the Jabra Solemate. Not that the other speakers were bad, but the Jabra Solemate just offers more than the others can. Let’s find out if it’s good enough that you should actually buy it.

Disclaimer: Although Jabra did provide me (Jeffrey) with the speaker, they had no influence on the editorial outcome of the review. The speaker has been tested for about 3 months / about 12 weeks while connected to my OnePlus 3T via Bluetooth or my PC via the provided 3.5mm jack cable.

When I took the Solemate out of its box it was pretty clear that this is a pretty rugged feeling speaker, there’s no way that you’re going to break this speaker anytime soon. This stayed true for the 3 month’ review period, during which it felt rock-solid. Yeah, I may have heard a clicky noise from the top plastic part of the speaker, which seemed not totally to be secured into place. But that might just be my unit, and I haven’t heard the noise since the last time I did. 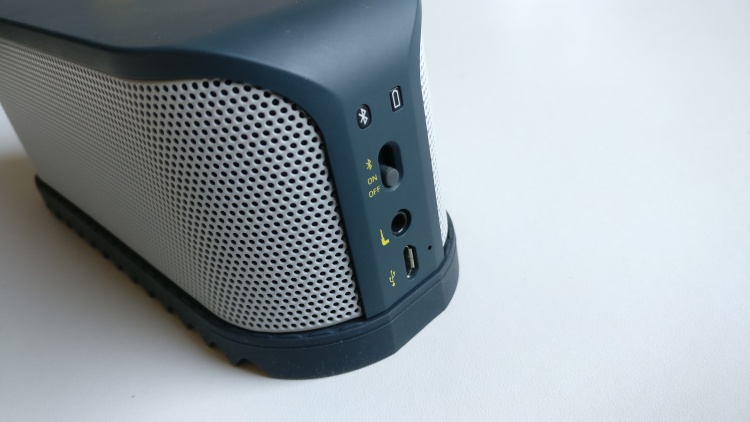 Moving on to the used materials, plastic, rubber and aluminum. The plastic feels like the soft-touch plastic you may’ve felt if you’ve used a HTC phone before, that comes with one downside though. It seems to be picking up scratches pretty easily, and the same can be said for smudges. The rubber feet, as it should look somewhat like a shoe but more on that later on, gives the build of the speaker some rigidity. The aluminum used on the Solemate is painted to the corresponding color of your speaker, and it seems to be holding up well. I haven’t seen any scratches or paint that’s gone up to now, even after me deliberately trying to get it scratched.

Like I just mentioned, Jabra wanted the speaker to have a resemblance to shoes. And while it looks pretty funny with the rubber feet underneath and the strap and the end or beginning, whatever you like to call it, of the speaker. I don’t get it why you’d like a speaker to look like a shoe. 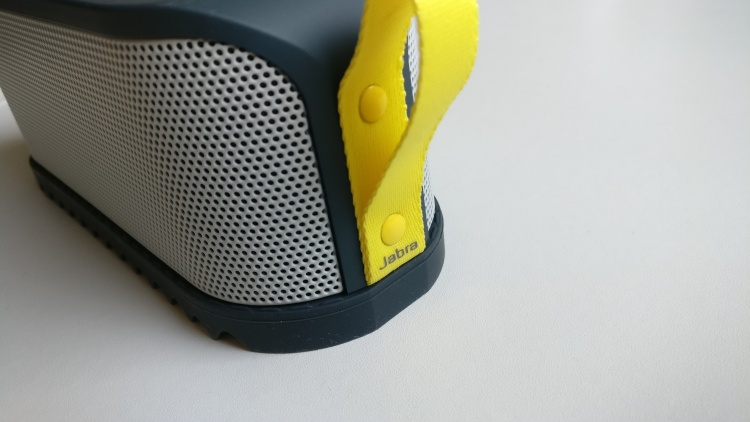 Getting past that point, the speaker does look pretty good. No matter which color you choose, the sheer size of the speaker and dual sided aluminum speaker grills give it something different. It gives the speaker the style for the audience it’s made for.

Connecting to the Solemate is as easy as it gets. Just turn on Bluetooth and select the ‘Jabra Solemate’, that’s it. I’ve had no range issues or whatsoever, and as long as you stay within the 10M/33ft. range you won’t notice anything at all. Though this may depend on whether you’re in a building or outside. 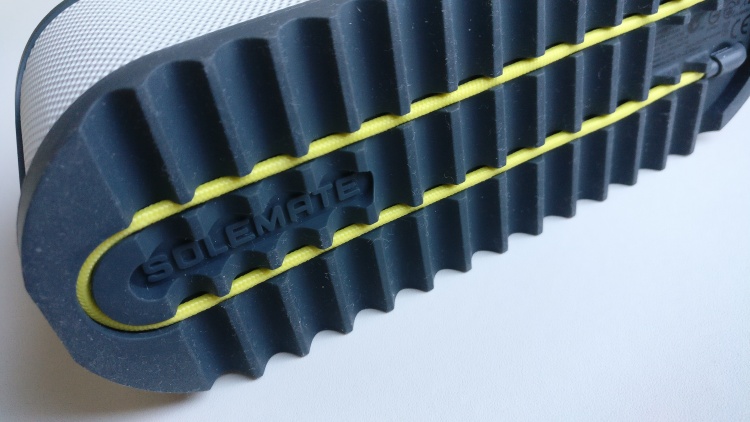 Jabra is advertising the Solemate to have about 8hrs of listening time, and I got close every time I used the speaker. Though there’s a difference of about an hour between Bluetooth usage and using the 3.5mm jack cable. The speaker easily lasted me about 7/7.5hrs when using the cable, and I got about 6hrs when using Bluetooth, and while I haven’t tested any other speakers in this price range… I think I can say that I’m pleased with the battery performance of the Solemate.

Charging the Solemate, I don’t even know what to say here. It’s about as annoying as it gets, one time I had the speaker charging all night, after which I woke up the next morning hearing that the battery was still depleted. Other times I’d charge it 2 hours via a micro-USB cable connected to my PC and it would go up from ‘depleted’ to ‘full’. I don’t know what the problem is caused by, and I guess I’ll never really know what it is. 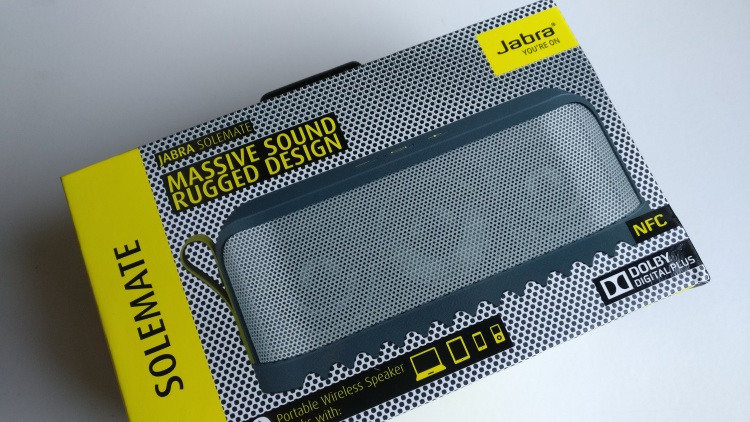 Last thing I want to talk about here are the media buttons up top; we’ve got the volume down, phone call and volume up buttons. One annoying thing is that the volume up and down buttons don’t work together with the Bluetooth volume controls on your phone. One easy fix for this is to put your phones volume at 100% and control the overall volume with the controls on top of the speaker.

In the end, what’s most important is the sound quality of the speaker, and that’s something Jabra certainly got right with this speaker. As with every audio review, I use a preset list of songs that needs to be listened to. The Solemate was used in conjunction of the OnePlus 3T and my Dell OptiPlex 790 for about 3 months, most of which was regular daily usage. 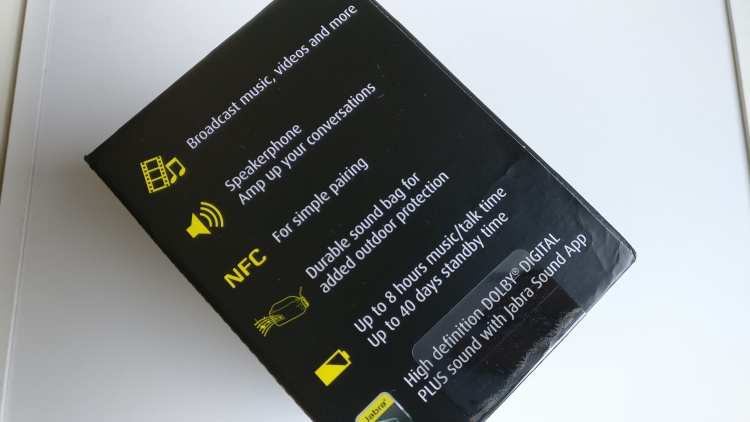 I’m in no way an audiophile, and I’m not going to try to be one. The overall soundstage is very wide, with more details compared to other speakers you see floating around on the market. Vocals are very clear, and instruments are almost never muffled away in the background what makes for a great listening experience. It’s missing some bass in the lower ends, which can be pretty clear at times. And if you’re turning up the volume to 100% you may notice some distortion, but the most important thing is that the Solemate won’t have any issues with filling your room with music. For the normal users listening to music all day and which simply needs a small speaker that does what it needs to do, this is a great sounding speaker.

Jabra made a special looking speaker, with some minor flaws, though they shouldn’t be seen as “game changers”. Jabra did what it does best with the Solemate, created a great sounding speaker that’s well build and looks different. That’s exactly what we need, something that stands out from the crowded space where Bluetooth speakers live in.

If you’re looking for a decently priced speaker, which combines good build quality with a good-looking body and great sound… This is your chance, the Jabra Solemate is available through Argos (£129.99) or Amazon (£60-130). 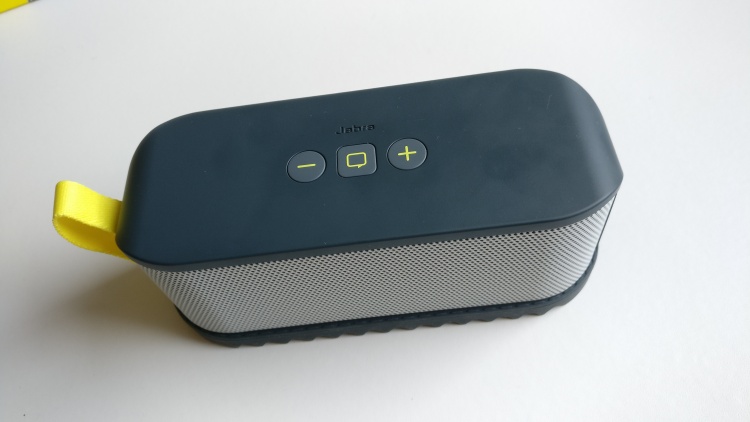 Buy from Amazon
Buy from Argos