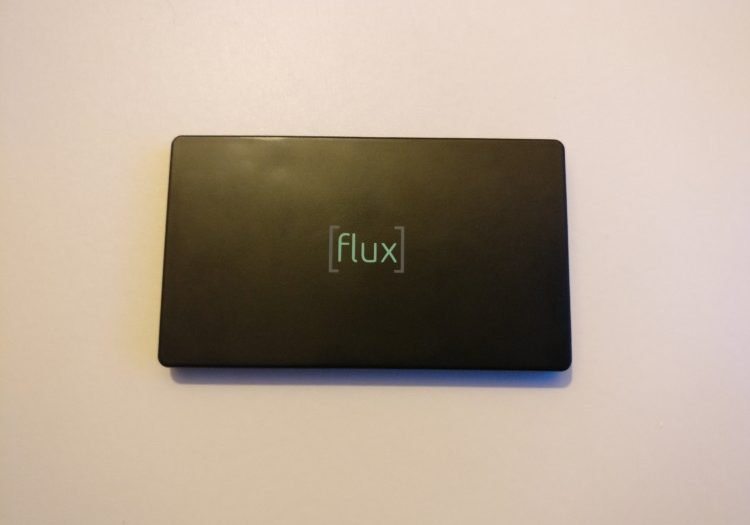 Flux Portable Charger Review: Is it worth $30?

Everyone could use a power bank, it’s just easy to top off your smartphone battery during the day to make sure you don’t need to plug it into the charger during the evening at the moments you want to use it. But to be honest, there are just too many power banks out on the market, is this one which I would love to see coming to the market? Or is it one which I would rather see going down? Let’s find out in my full review of the Flux 4000mAh Portable Charger.

Flux was nice enough to send one of their Flux Portable Chargers to me right from the US. Although they provided the product, they had no influence on the outcome of this review.

First off in this review is the design of the power bank, which is something that could be described as “boring”, “industrial”, and as something you wouldn’t buy because of its beauty. Because it simply isn’t the most beautiful power bank out there. The 2 grey corners and the cheap looking power button on the side of the power bank don’t make it any better. And then we’ve got the sides with some ridges to it, but why… I mean, did one really think that would make this look any better? 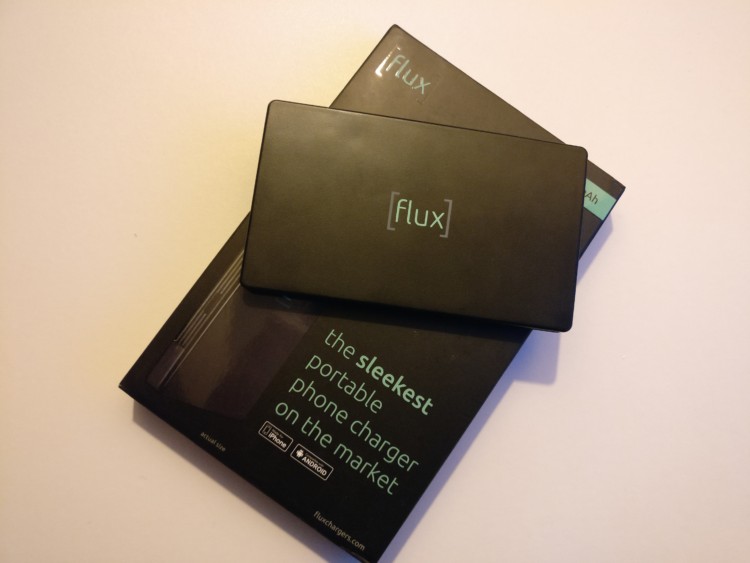 I understand that it’s hard to really make it into a good-looking power bank because of its sheer dimensions. But for its price, they should’ve been able to make it look better than that it does right now.

Unfortunately, the power bank doesn’t have the best design of all the power banks out there. But they’ve done a great job on its build, because it feels really solid. You can definitely feel they’ve spent some time on getting this right. They used aluminum as well for both sides of the power bank which feels really good, not cheap shiny plastic which I saw on the Xtorm power bank I reviewed a while ago. 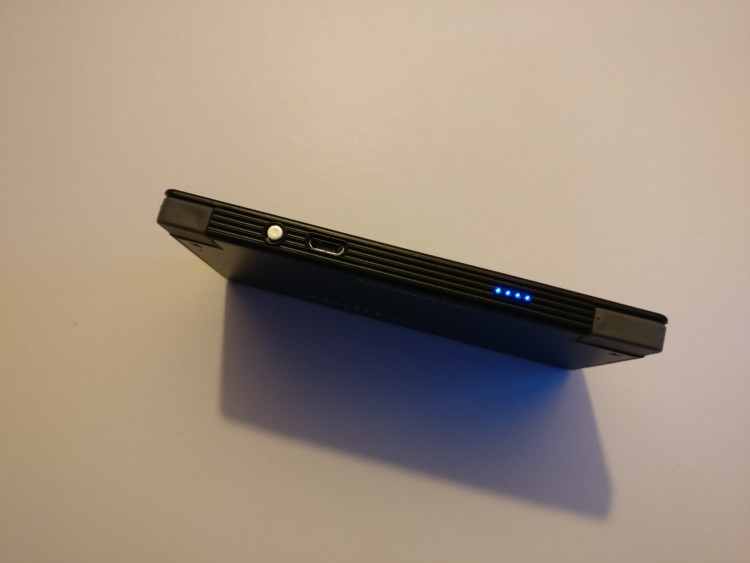 One thing that I do need to mention is that with my unit one of the built-in cables doesn’t sit completely straight. But, oh well. Normally you wouldn’t really notice it and it doesn’t make the build of this power bank any worse.

This review will probably be one of my shortest reviews ever. There simply isn’t so much to tell about one of the sleekest 4000mAh power banks out there. And it needs to be said, damn this thing is thin. Putting it in your pocket is no problem at all. Just don’t put it anywhere near your keys because this thing loves scratches.

Something else that I want to mention are the built-in cables, there’s unfortunately no place to stick in your own USB cable. There’re two cable’s built-in, one is a Micro-USB cable and the other is a Lightning cable, so for those out there with USB C, I’m sorry to disappoint you. The max. output of the power bank is 5V / 2.1A, using both cables at the same time means that you’ll probably get around 1A each. 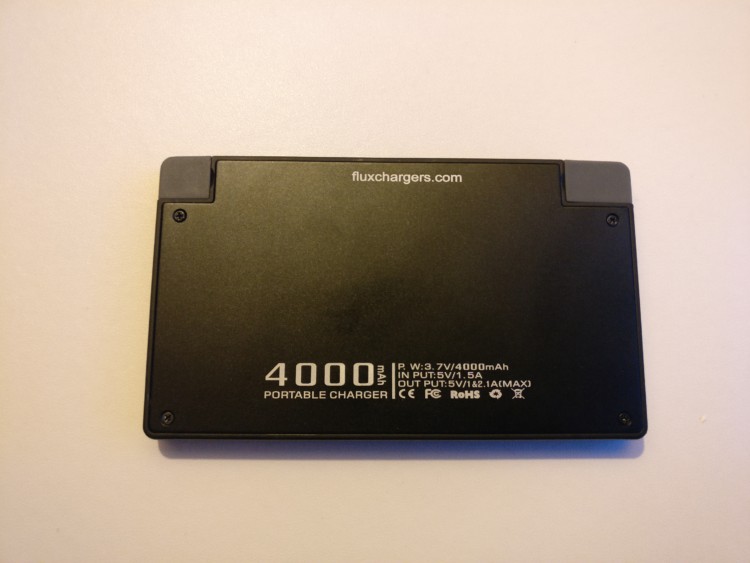 How did I test this power bank? I simply charged my OnePlus One with it until it was empty, which was within one full charge of my OnePlus One. It did get close to getting my phone charged. The power bank ran out of juice at 93% coming from 10% for the first charge, and with the 2nd test it did about the same charging my OnePlus One from 5% up to 90%. My OnePlus One has got a 3100mAh battery, which is probably degraded after a year of usage. As it’s now certainly less than 3100 I would say that the battery can probably hold somewhere around 2900mAh. On average, it could charge 85% of the battery; 2900:85×100 = 2465mAh. This would mean the power bank has got an efficiency rate of 61.4%, which may sound really low. But do note that at all times the phone was on while charging (the phone wasn’t being used during the charging cycle though.) Charging up the power bank goes pretty fast and should be completed within 3hrs, although I didn’t put a timer for when it should’ve been filled up. It felt like it went pretty quickly. 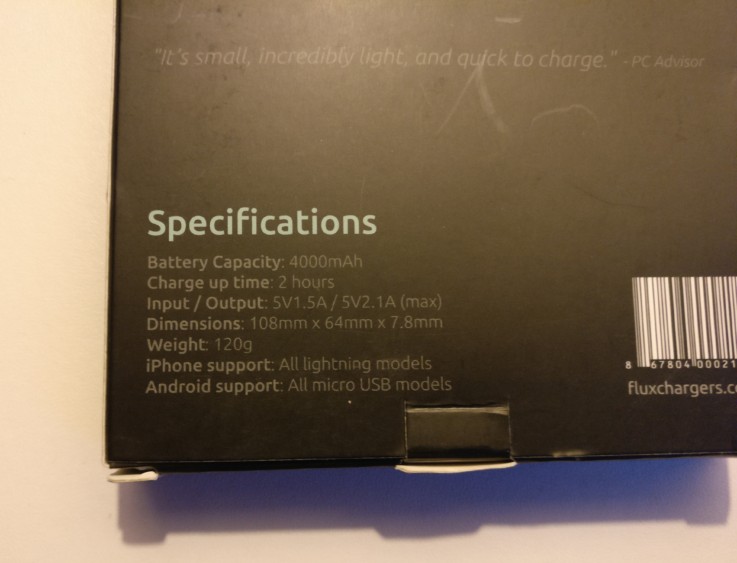 If you really need to fully charge your phone, make sure the power bank has got at least twice the size of your phone’s battery. You could say that I’m not really surprised by the fact that it has got such a low efficiency rate, you always lose some of its energy while using it. In the end, I think that people owning a smartphone and who need a quick charge, will be pretty happy with the performance of the power bank.

The last part of my full review of the Flux Portable Charger. After using it for more than a month I need to say that the power bank could be really useful at times, mostly due to it being so small meaning that you could carry it to everywhere without even noticing that you’re carrying it.

Yet, I’m a bit disappointed about the price that Flux is asking for this power bank, which is a whopping $30. Looking at the market of power banks, you can get a lot more worth for your money… Although you’ll never quite get a power bank this thin. 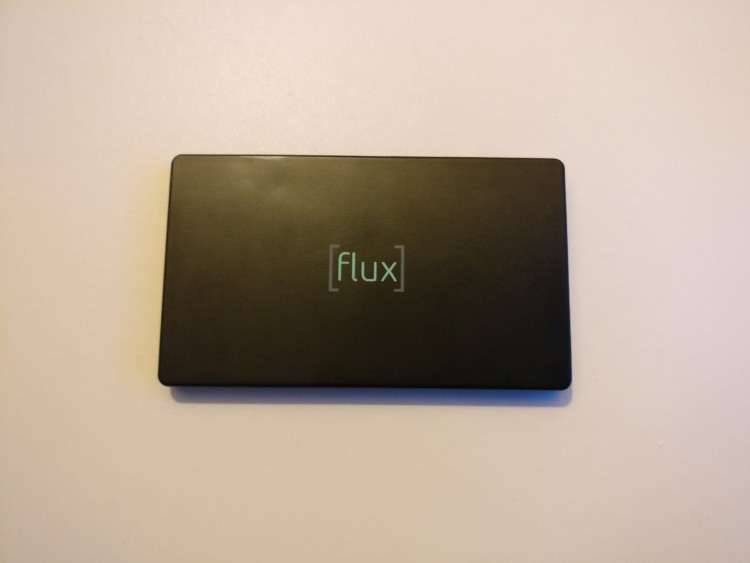