EC Technology are always revising their previous products and releasing incremental updates, just like many consumer electronics manufacturers. Their 5W speaker, decked out in stainless steel, boasts some significant improvements, and we took it on holiday to put it through its paces. Read on for our full review of the EC Technology 5W Speaker. 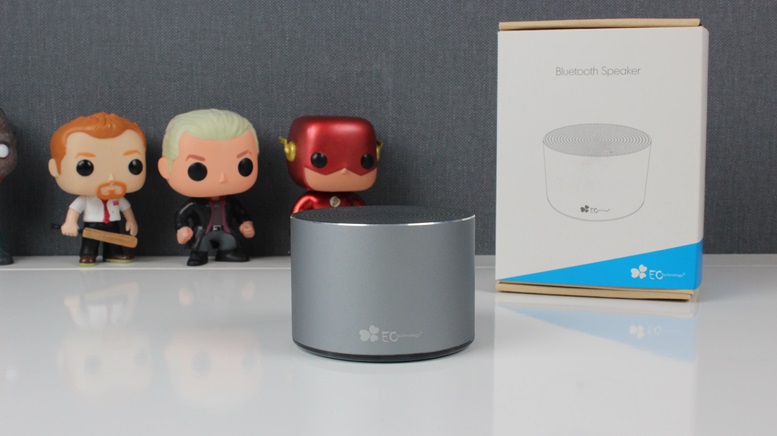 Many thanks to our friends over at IEC Technology for sending this unit over for review, and unlike similar sized products it has a premium feel we’ve only seen from EC Technology’s Cylindrical speaker. So what makes this any different to numerous other offerings, even from EC Technology themselves? Well it has a few tricks up its sleeve. Let’s take a look in the box first of all. 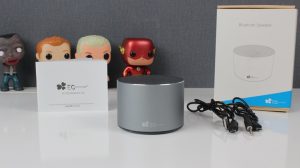 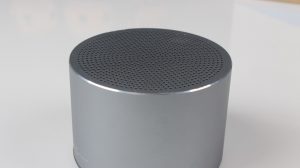 Let’s start with a look around the product. The top of the speaker has a brushed steel grille which allows the sound production to spill out from the top, something similar products tend to inverse for reasons that are completely alien to us and can be explained only by the requirement for a muddy, bassy sound. Thankfully that’s not the case here. The grille gives way to a machined chamfer which morphs into the rest of the unit, which opts for a matte steel finish. Along the sides of the device are some subtle branding, along with a microphone pinhole and a micro USB charging port/AUX port.

Just prior to the base of the unit is an LED strip spanning the circumference of the unit which glows Blue during use and is used to determine incoming calls, as well as pairing status and mode.

The bottom of the device has a non-slip material, with previous song/volume down, play/pause/power and next song/volume up buttons across the centre.

Let’s now take a look at the most important aspect of this product, the sound. 5W doesn’t sound like a lot does it? Well this little unit tries to make the most of it by harnessing its shape and ensuring the sound is pushed up and out of the grille to give elevation to the audio and deliver a little more bang than you’d expect.

There’s not a lot of bass to the unit as you might expect but during our testing outdoors, it got plenty loud and managed to deliver clear enough audio to make it usable in small gatherings (pool parties, BBQs etc) without it being completely drowned out.

As strange as it is to say this about a Bluetooth speaker, but the selling point of this unit isn’t its sound. It’s not even its portability with the unit standing at just 5.5cm tall. Instead, the stand out feature of this unit is the battery life. Powering the device is a 1300 mAh battery which is by far the biggest we’ve seen in a unit this size. Hell, the recently released iPhone SE only has a 1624 mAh battery! 1300 mAhs on a Bluetooth speaker is an excellent achievement and delivers, as you’d expect, excellent continuous playback numbers. 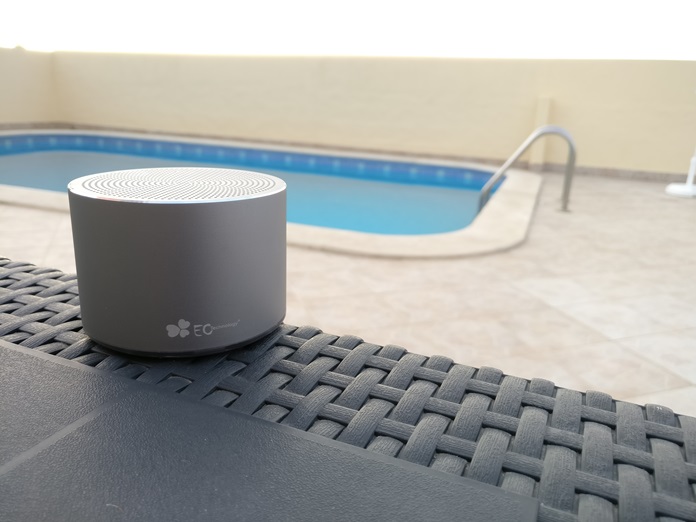 During our testing on a week-long holiday, we used this device each day, for several hours, for 5 consecutive days before it started to notify us of low battery (which unfortunately is a rather annoying tone from the unit interrupting playback). EC Technology claim this device lasts up to between 6 and 15 hours. We managed to get just over 14 hours from our use, in 2-4 hour stints on various days so we can verify that claim! All 16 hours of that playback was via Bluetooth too.

Of course if Bluetooth connectivity is not available on your chosen device (is that going to even be a concern in 2016?) then a 3.5mm cable is included that connects to the micro USB port. Playback in this mode doesn’t alter the sound production, but might just save you some battery life.

Call quality was acceptable in a pinch, and whilst we wouldn’t recommend using this device exclusively for that, it can, and will operate acceptably.

Finally, a note of caution. The Bluetooth connectivity range on this device is surprisingly low. In an open, outdoor environment, we found corruption in the data stream at just 4 metres when in a pocket, and at 6 metres when there was a perfectly clear line of sight. Whilst we doubt this will be an issue for some, there is the likelihood with this device that users are going to want to move around with the source device, which may cause some playback interruption. Set it up on a table next to each other and let it rip and you’ll be fine.

There’s not much left to say except, that for £16.99, this is a nice, tidy, well-built Bluetooth speaker with acceptable sound, and excellent battery life. When in the market for a speaker like this, most consumers know they won’t be getting booming bass and crisp, clear highs in their audio playback. It is what it is, and what it is, is a good representation of the top end of the market area it’s aimed at; the budget friendly, portable Bluetooth speaker market.

Give it a go and let us know what you think! Available at Amazon UK now. 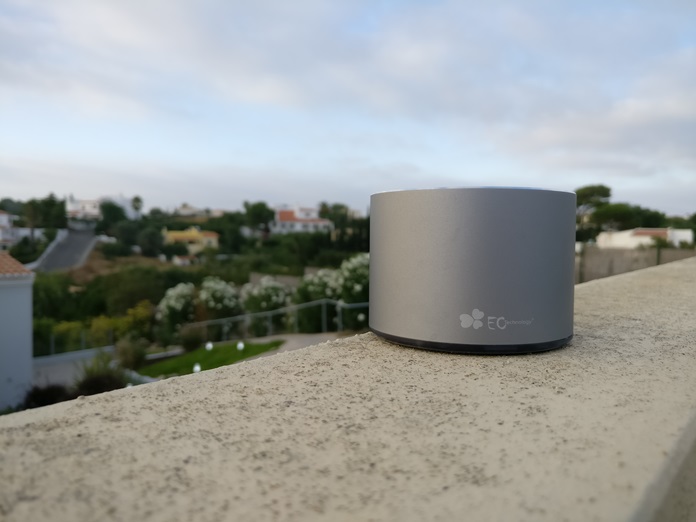