Mice used to be that PC peripheral purchase (say that three times fast!) that caused as much debate as the type of mechanical keys one should use in a keyboard. For the longest time, Logitech were the kings of the gaming mouse market. With time came many more competitors which drove the price down. The standard of gaming mice now is, generally, very high from most notably manufacturers. But what about at the lower end of the market? Are tings as bad as they used to be? Let’s take a look at the Easterntimes Tech X-11 Gaming Mouse available for less than £12! 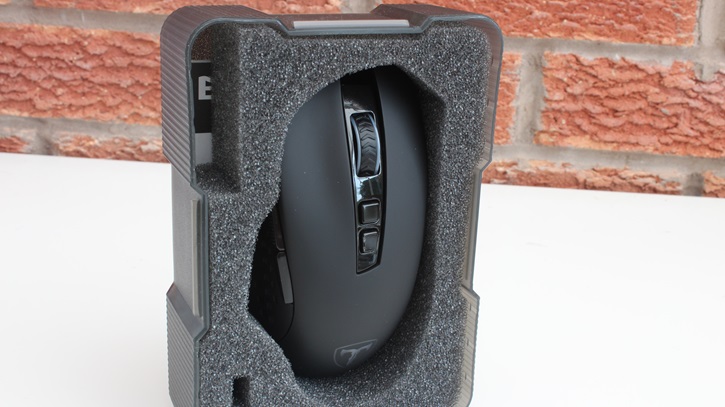 I’m used to using a Logitech G500 – it’s lasted me many a year. I’m not looking for a new mouse to replace the one on my workstation/gaming rig, but I was looking for something, similar in size and utility, for my mobile work setup. Easterntimes Tech reached out via their PR and suggested I look at this device. Now the Easterntimes Tech X-11 is, first and foremost, a gaming mouse. A budget gaming mouse at that. It’s presented in a lovely little plastic box with some foam padding – I’ve actually used this to cart the unit around in once or twice.

We have most of what is required in a gaming mouse right here; multiple buttons (7 operational buttons), a mixture of texture types on buttons for easy travel, a selection of DPI settings as well as the obligatory RGB lighting effects. Sadly the RGB lighting isn’t configurable though.

On the left of the device there’s a nice little thumb rest which allows easy access to the two buttons available whilst also allowing the mouse to continue to glide in operation without changing the weight bias. There’s also an admittedly cheap feeling plastic set of hexagonal cut outs on the side to act as grip. It helps, but a different material would have been welcome here. On the right side we have more of those hexagonals. On the bottom of the device sits the On/Off toggles. This unit can be turned on with or without the RGB lighting effects, which is nice if you’re trying to be discreet. Moving on, the battery compartment is also on the bottom, housing the required AA battery (not included), and a storage hole for the included Bluetooth dongle. The dongle doesn’t sit flush, but that might not be an issue as you’ll not be using it when that’s in situ anyway.

Up top is where the fun is of course. Left and right mouse buttons are as you’d expect, with smooth matte finish to them. Unfortunately that finish, which is continued throughout the top portion, picks up fingerprints and grease like no tomorrow! 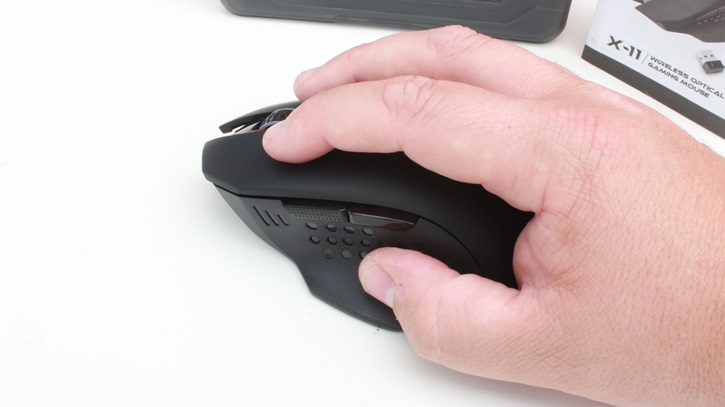 I don’t know what mechanical switches are in this unit as there’s no documentation that suggests this, but they aren’t subtle. This isn’t a criticism; I know many people out there practically swear by Cherry MX Blue switches for keyboards, which are obnoxiously loud. These aren’t on that level but they are Cherry MX Brown level’s of loud. Perhaps loud isn’t the right word. The noise they make is more coarse to the ears that that of larger manufacturers. Perhaps that’s the best way to explain it. Either way, they have a nice tactile feel. The travel is a little long, but nothing that’s going to scare casual gamers.

Housed between the left and right buttons is the scroll wheel, and the DPI toggle buttons. The scroll wheel isn’t the nicest thing in the world to use. It’s ‘stops’ are only pronounced if you take great care over each individual movement you make on it. However, in the heat of battle, scrolling fast feels somewhat restricted compared to, again,. the larger brands. For example, many new devices come with the ability to ‘free scroll’, essentially freeing the mouse of it’s scrolling stops, and allowing a flick scroll motion. That’s not here. The scroll button click is nice enough though.

To finish, the device has a nice “T” logo on the backside of the product which glows – it’s a nice finish actually. 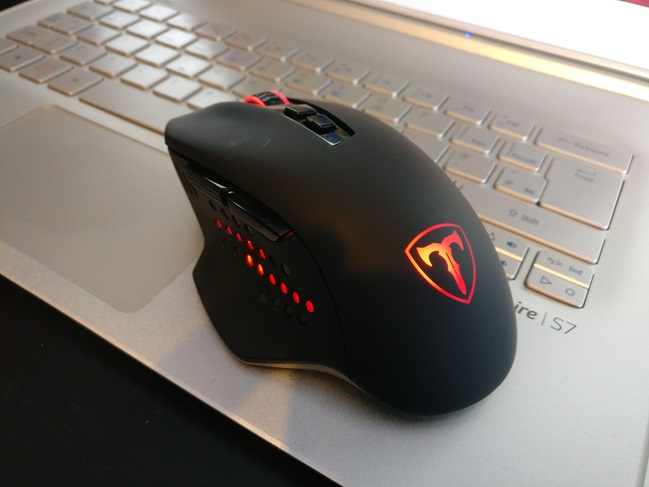 There’s some nice features included on the X-11 also. Multiple DPI settings of 800/1200/1600/2000/4800 (yes, a big jump) are nice to have and whilst a more granular selection via software would be nice, we again need to understand the price point this comes in at.

Then there’s the low power mode, which is essential for wireless devices these days. The X-11 will go to sleep after 8 minutes of inactivity to prolong the battery life, which is rather good anyway. Due to the easy access On/Off toggle I found myself reach for that most of the time instead for peace of mind.

The software, which was a little bit difficult to find, but once downloaded you will be forgiven for mistaking it for the built in Mouse options of windows. It’s very old hat, very! It does give you the functionality you need though. Adjusting scroll and click speeds, customising the buttons, as well as allegedly adjusting the volume (No, there is no speaker – presumably this driver is used for other devices too!) are all available from this Windows 98-looking screen.

Now, here’s my use case which helps further put my thoughts into perspective. I have a gaming mouse already. Yes it’s ageing, but it still does the job more than well enough. What I don’t have however is an equivalent device that I take on the road with me when I’m travelling, which is most of the time. I’ve used a Microsoft Wedge mouse, a Microsoft Arc, as well as a number of smaller Kensington devices specifically made for portability, and all fail to allow me to use the same grip that I’m used to using when I’m at base with my workstation. I have a claw grip for the most part, and smaller devices can cause sufficient pain and leave me with strain after an hours use. The Easterntimes Tech X-11 is sufficient close to not only the size, but operation to my G500 that I can use this without issue when out and about. The fact it’s wireless means it’s easily portable, and if I fancy breaking out a bit of CS:GO or DOTA2, I could, as this has the added functionality required for a sporadic gamer.

You won’t see one of these in any e-Sports sessions, but for the casual gamer, it will do a job, and not leave you out of pocket!

That’s the take away here. The Easterntimes Tech X-11 is, at the time of publishing, £11.99. It has a solid if unremarkable build, customisable buttons, DPI selection, and of course, RGB lighting. Button presses are tactile enough, and the glide of the unit is acceptable, even for products twice this price. I may not be replacing my Logitech G500 with this product, but it’s replaced the Microsoft Wedge, Arc, Lenovo N700 and Kensington products that were my go to devices for on the road, previously. We’d rather not call this device a gaming mouse, but simply put, whether you want to game or whether productivity (or portability) is your bag, then this device seems to be able to do the lot adequately enough for most casual consumers to be happy with it. Gone are the days when a cheap mouse is discarded out of hand; it seems that cheap can get the job done now. How times have changed!

If you’re interested in picking one of these up, we’ve been graciously given an offer code delivering 10% off the price. Simply use M4WIRXQN at checkout. Make sure you tweet out your thoughts when you get the device. 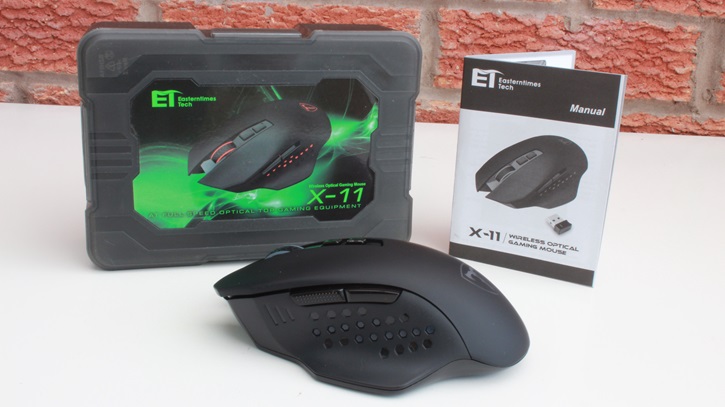