I’m always wary of cheap keyboards. I’ve had them in the past and there’s always something a little off. The mechanical switches are poorly made, have incorrect travel for my typing style, or simply have poor drivers for UK-based use. Things are starting to change though. Whilst I was happy to go out and spend some money on a Logitech G710+ or a Razer BlackWidow, most might not feel the need. The Easterntimes Tech I-500 (or VicTsing depending on where you shop) is a budget mechanical keyboard for gamers. Let’s see how it stacks up. 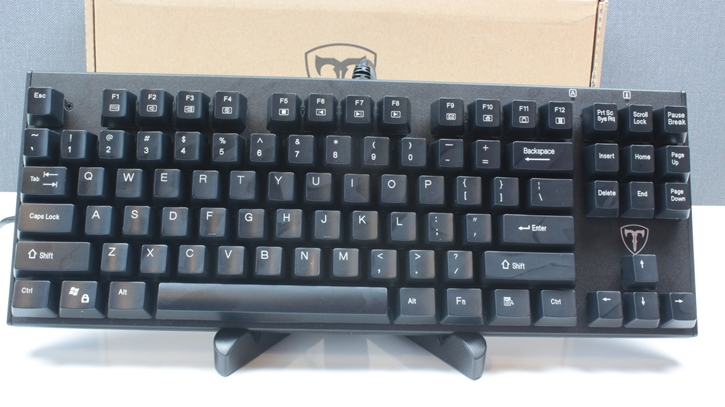 Straight off the bat here I have to say I’ve been known to be a little bit of a keyboard snob in the past. Previously, any ‘gamer’ that wasn’t using a Cherry MX Blue switch-based board was laughed at. Brown MX switches were acceptable too, but beyond that, you were a productivity seeker, not a gamer. I’ve mellowed a little on that score so that makes this next bit a little easier. Mechanical keyboards under £50 are now quite acceptable, even for gaming. Of course I’m not suggesting those training for eSports leagues rock up with a sub-£50 board and play out of their skin, but for the casual home gamers, these new breed of cheap mechanical keyboards might be absolutely fine. In fact, they might be fine for general use too.

Let’s start at the beginning though. The board is branded by Easterntimes Tech, whilst it is sometimes sold through a VicTsing branding, but whatever the brand, the I-500 keyboard is a 10 key less (i.e. no numpad – sorry bean counters!) Blue switch-based mechanical keyboard. The Blue bit is especially important as the switches attempt to deliver the same experience one might expect from a Cherry MX Blue key as evidenced by Easterntimes Tech’s call out of the Blue switch’s “click sound”. Let’s check out some of the specs:

My immediate thought when I started typing on this board was, wow it’s nice to be back in the land of MX Blue switches. I had to check myself actually as it feels almost identical to my old Razer BlackWidow Ultimate Edition which did indeed have Cherry MX Blue switches. This I-500 board even sounds the same!

The typing experience is a little more obtuse to begin with as the keys feel a little closer together. I went back and checked against other keyboards and they’re not dissimilar (perhaps 1mm difference) so that couldn’t be it. I put this down to me re-learning how to type on Cherry MX Blues once more as the key travel is a little higher than other switches I’ve been using more recently. The key travel here is a whopping 5mm, which is only around 1mm different to the Cherry MX Blues that these will be compared to, but that took me a good 15 minutes to get used to.

The key caps themselves are recessed which makes hitting the sides of adjacent keys all the more possible. I’m no speed demon but I use keyboards for around 8 hours a day for my day job so I’m used to darting around keyboards with ease and whilst this allowed me to do just that I did find myself having to correct errors on a more frequent basis. The great news here is that as they are built on the MX spec, replacing the key caps with some closer to that which I’m used to would be a doddle. All in all, once you get used to these switches, just as the Cherry MX Blues back in the day, typing is relatively easy and all that remains is whether you love of loathe the incessant actuation noise.

Let’s address the elephant in the room though. This is branded as a gaming keyboard but there aren’t any flashing lights! What’s up with that? Well, whilst I do’t mind, there will be some out there bemoaning the lack of any RGB lighting on the keyboard. I get their point frankly and I miss having backlit keys myself. Additionally there is no software included with this board which you might also think is a little amiss. Software is normally a key component of gaming boards/mice to enable macros, profiles and a number of other settings to be customised based on the requirement of the sure or the game in question. Nope, not here. No profiles, no macros, nothing. Granted this is no doubt not a shock given this is a 10 keyless board – which keys would one use for the macros! Still, for a board claiming to be a gaming board, it’s let down in that regard.

Summing up, there’s a lot to like about this board for Die Hard gamers. It has MX-based switches so cap key swapping won’t be an issue. It has decent travel akin to Cherry MX Blues, and it’s a very sturdy board with almost zero flex. Great. however I’d suggest that for those seeking a productivity keyboard, that this is similarly acceptable. Ignoring the lack of any numpad, the keys are responsive, and are easy to get used to. The lack of any RGB modes might reduce distraction during those crucial Excel spreadsheet moments, and the included function keys for quick access to the Browser, Email and Calculator might just be a winner on that front.

You can probably guess my overall thoughts on this product. It’s a nice budget keyboard. It’s not for hardcore gamers due to the plethora of missing features, but it will do casual gamers who don’t need a million and one shortcuts for MOBA games. It’s a nice enough experience, and for as little as £27.99 you can’t go wrong if you’re willing to except the “gaming” short comings. I’m not, but I can see it has a place for those that will. Coincidentally this entuire review was typed on the keyboard and I grew to enjoy the Blue switches once again and it didn’t take too long! 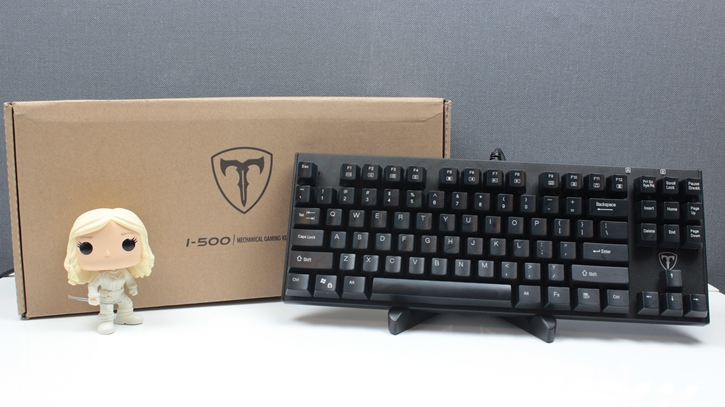