Wireless headphones are everywhere and have been for a few years now. Ever since headphone jacks started disappearing (although I’d argue they disappeared because Wireless was more prevalent) we’ve seen less wired headphones other than for audiophiles. With the EarFun Wave, not only do we get Wireless capabilities, but they show how far we’ve come in a few short years, with a pocket-money-sized retail price to boot. 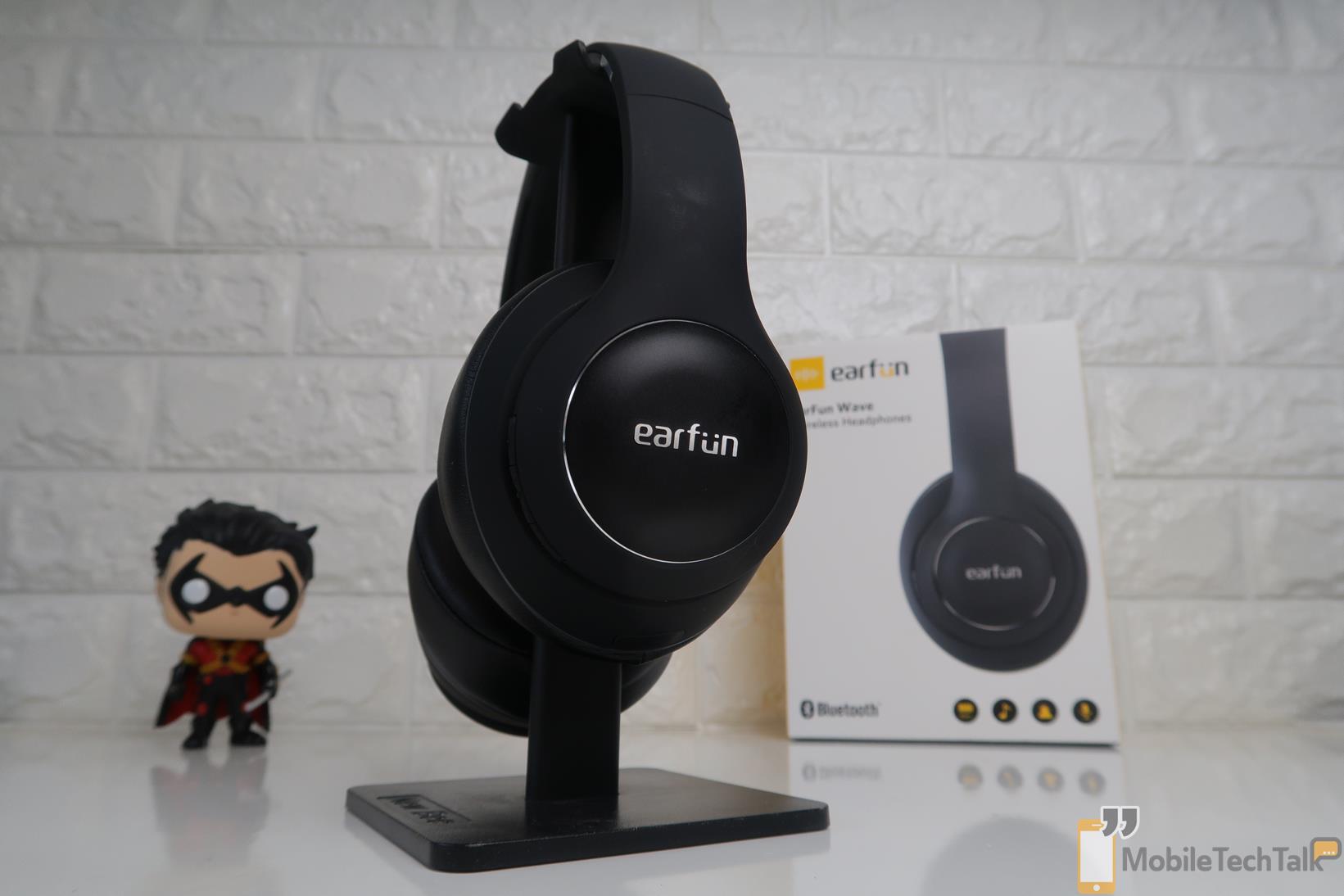 Out of the box, the EarFun Wave comes with a hardened carry case, a charging cable, 3.5mm audio cable and a user manual. There’s no extra packaging which is nice to see, and aside from there being no loop on the travel case to carry it, and the charging cable being microUSB, there’s nothing out of the ordinary.

The EarFun Wave boasts some impressive specifications on paper for just £35.99 also. 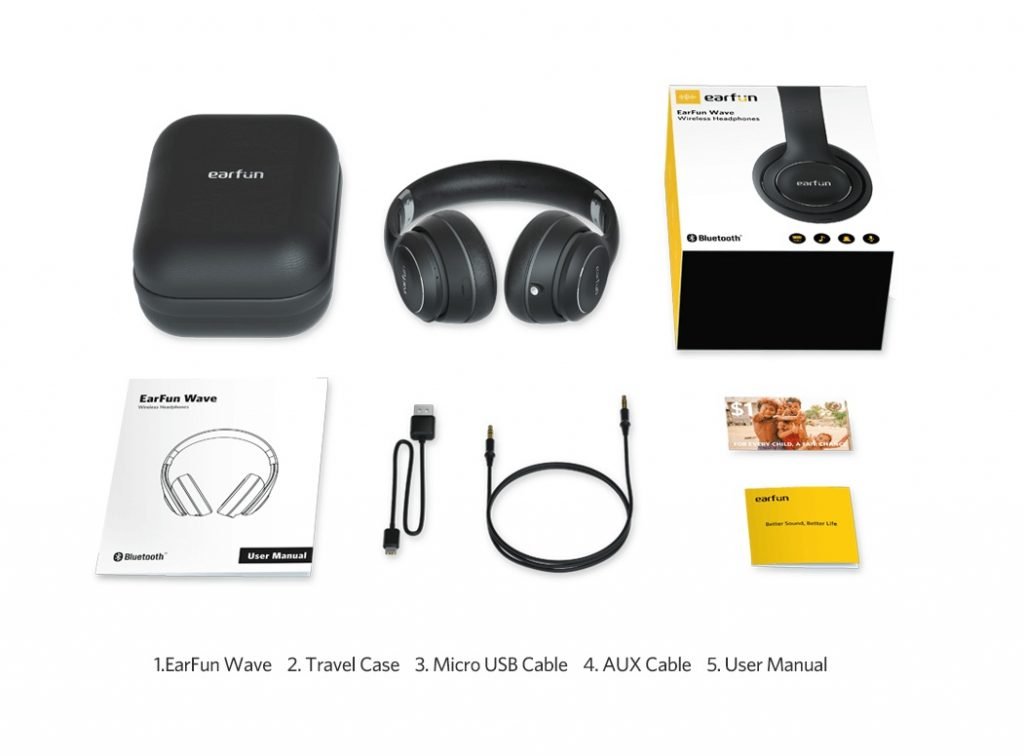 You’ll notice that there are no Qualcomm codecs on show here such as aptX HD, which means you’re left with lower bitrate, higher latency SBC and AAC. If you’re a casual audio listener and not an audiophile the chances are that you might not notice any difference in the quality of the audio. The transfer speed across SBC and aptX, for example, are quite similar.

Taking a look around the headphones, there’s a 3.5mm audio jack on the bottom of the left earcup for those times you run out of battery. Across on the right-hand earcup is where the rest of the interface is. volume up and down, and a central power button sit slightly offset on the edge of the cup, along with a pinhole microphone for calls and the voice assistant, and a notification LED. Just sitting snuggly beneath that is the charging port covered by a rubberised cover.

Let There Be Comfort

We’ve had a little walk around the unit, and the first area I picked up on was the padding. My ears, as I’ve said in many reviews, are sensitive, so it’s very important I have protection. The headband has approximately 1/2-inch of padding but feels comfortable enough. The cushioning on the earcups of the EarFun Wave are what I’d call adequate. There’s around 1-inch of it, but it feels quite lightweight. These are on-ear headphones and not over-the-ear unless you have very small ears, so that cushioning is very important. To me, they needed to be a little denser as they feel a little too airy.

It’s All About That Bass…and Treble

Once on and playing audio the sound quality is rather good. The highs stood out to me as very clear and crisp. There’s a clear division between fore and background percussion too. The clarity here is great news for those favouring acoustic audio and lovers of audiobooks also. The low end is equally clear, without being overbearing. This is a trait I’ve noticed more and more filtering down into the lower end, budget-orientated devices. Only a few short years ago, these same headphones would have had a bass-heavy signature, without doing it much justice. Now, in 2019, we get something a little more nuanced and balanced.

The mids, however, are a little messy, bleeding into both the highs and lows at times and without any completeness themselves. They aren’t hideous but in some songs, I have found myself losing some of the detail in the mids in favour of the high end. That doesn’t make for a bad listening experience as such, as the sound is still warm and vibrant, but it will annoy some who listen to the same song on repeat. 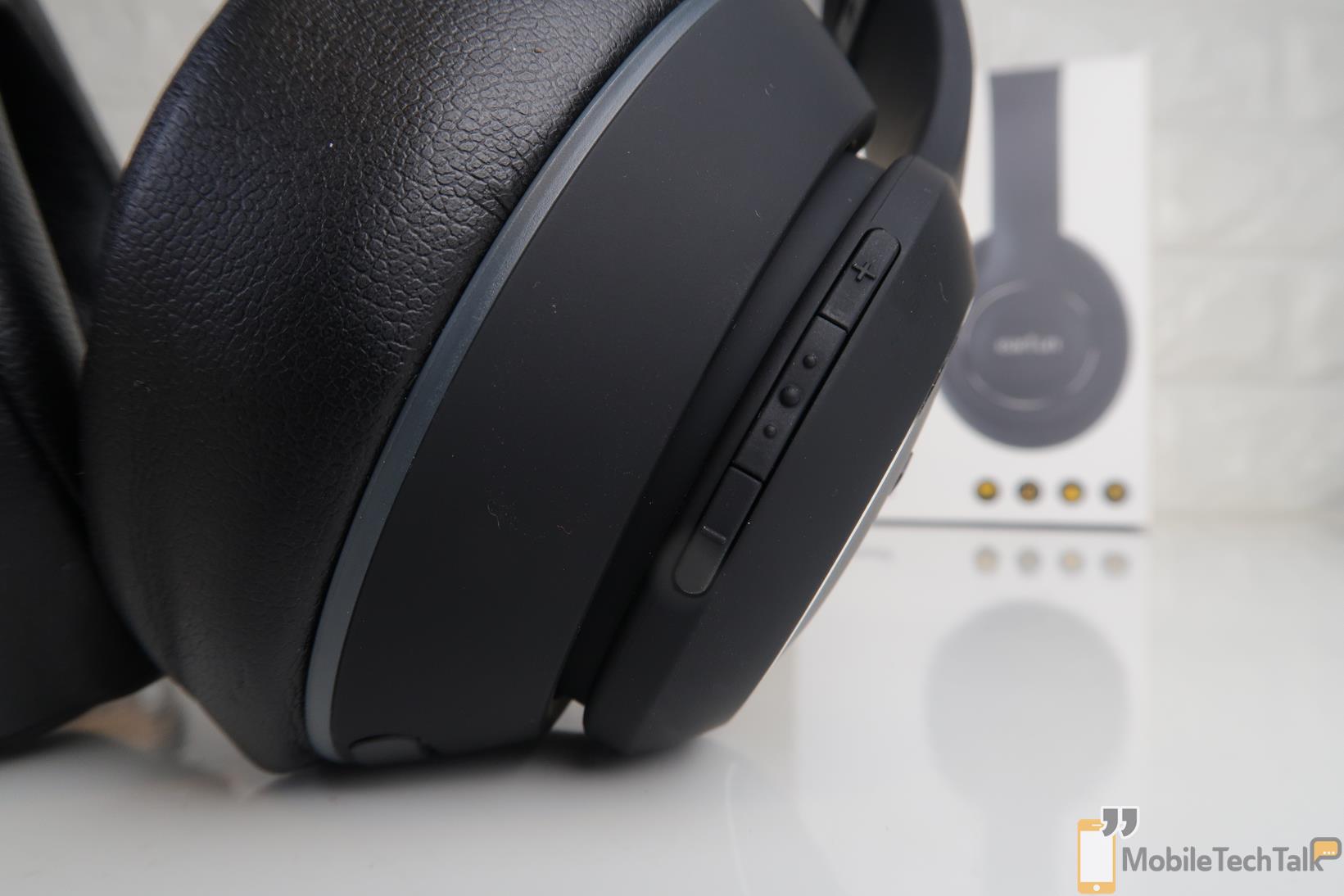 In terms of interaction with the EarFun Wave, the buttons have dual functions, with the volume buttons doubling up as repeat/skip track selectors, and the play/pause button also powering on/off the device and activating the voice assistant with a double-tap. They have chosen the correct implementation of dual functionality on volume buttons, in my opinion, by making the first touch control volume, and the secondary control the tracks, however, there is an issue. The buttons themselves are clicky and responsive but have despite having tiny bumps on them, there are indistinguishable from each other at a touch. The only way to figure out what you’re touching it to slide your fingers to the edge, and then ensure you go back the other way. I’d like to have seen some separate here as well as more pronounced textures to better differentiate them.

Back to the audio, and these do get quite loud and without any distortion either. 70% volume was as much as I could stomach though, which should be enough for most. The volume level directly impacts how much battery life is drained during a listening session too. Thankfully the included 680 mAh battery is good for around 40 hours of playback at moderate volume levels so you won’t have to worry about charging these too often. When you do, we found they actually charged a little faster than expected, taking just 90 minutes to fully recharge.

A choice word on isolation and noise cancellation here. They only passively cancel noise, but they do a decent job without being what I’d consider “good” in that arena. Where they do drop below adequate however is in the isolation stakes. Your fellow commuters will be able to sing along with you to your songs as you listen as they do leak quite a bit of sound at 50% volume or higher, which is something to be aware of. 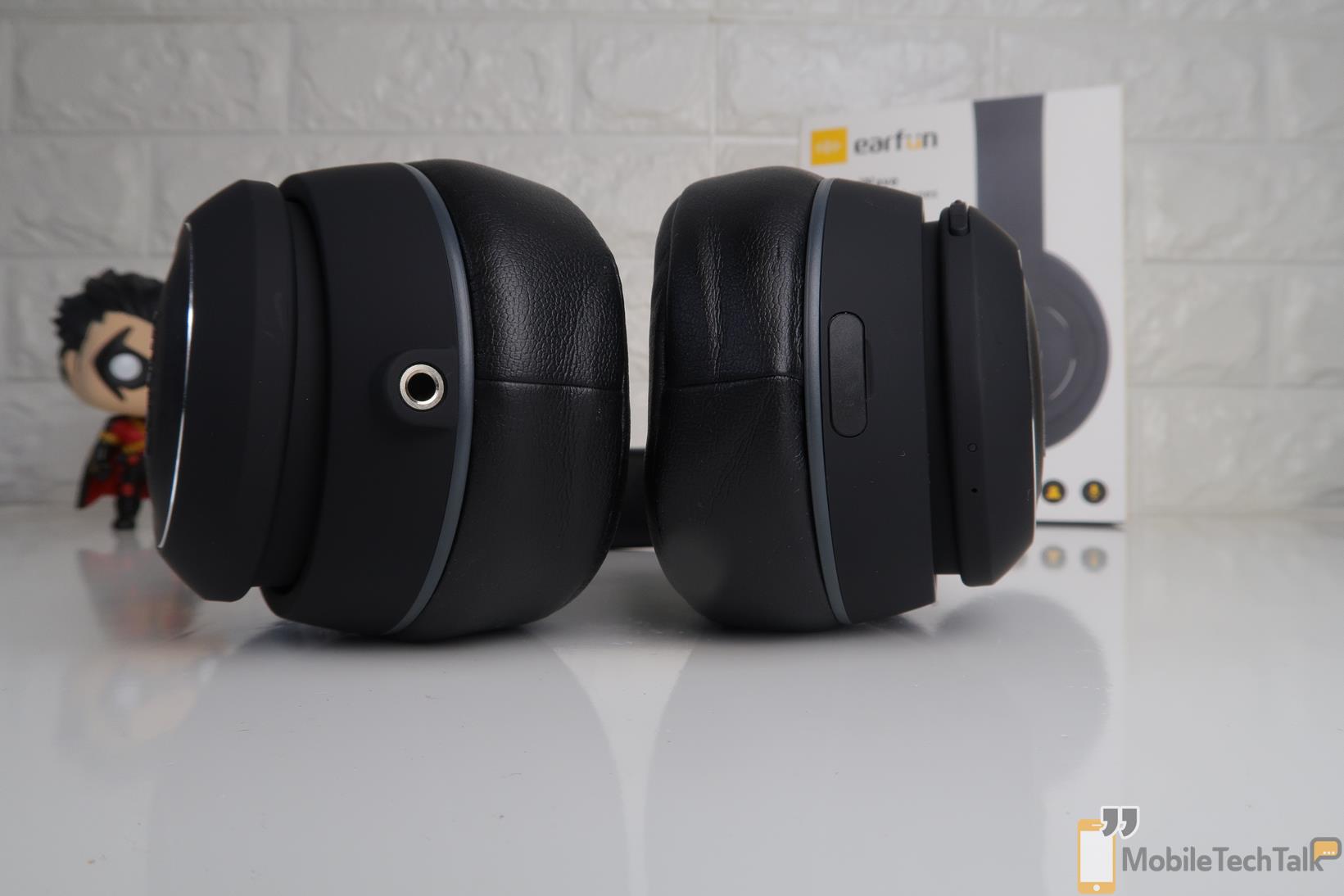 Finally, one of my biggest issues with lower-cost headphones is their wireless range and their ability to meet the minimum requirements of the Bluetooth version they operate with. In fact, many I’m reviewed have struggled with delivering the indoor Bluetooth v4.x range of up to 10 metres, whilst using them outside (which is supposed to deliver up to 50 metres). With the EarFun Wave, we’ve got Bluetooth v5.0 on board which means increase range as well as bandwidth. I must confess to not stretching to 200 metres in the outdoor test. Our garden is around 12 metres and it managed that just fine, and I’ve had zero issues indoors also. I’d say that can be chalked up as a good result.

The EarFun Wave isn’t going to replace anybody’s audiophile equipment. It has no low-latency codecs, has no active noise cancellation, and they don’t do a great job of tempering sound bleed either. They are also not a £100+ pair of headphones. The clue is in the name – these should be fun for people to use, and for general use, not specific, technical use.

I wish they were a little comfier, but an hour of listening was achieved easily. I wish the buttons were a little more tactile and spread out, but I did manage to get my presses to do what I wanted them too more often than not.

That’s the story here – we have to compromise. Personally, I’d rather compromise on these items than on the audio quality, which here is good, or the battery life or Bluetooth range, both of which are great.

Just a few short years into the Wireless revolution and we’re getting devices such as the Earfun Wave, under £40, delivering what I honestly believe would be a more than an adequate experience for most consumers. What an age we live in!