The Puridea 8000mAh powerbank and Bluetooth speaker aims to make it easy and enjoyable to share music and charge your phone and gadgets at the same time. Providing a huge backup battery and Bluetooth speaker (with additional connection options), we find out whether the Puridea backup power supply and wireless speaker can deliver on what the box promises.

At the time of writing the review of the Puridea Powerbank and Bluetooth Speaker, is available to purchase for £25.99. It is available in three colours; red or yellow with black-accented speaker grill or grey with gold-accented speaker grill. For the purposes of this review, MobileTechTalk received the Powerbank from Puridea. Check out some of their other products, here.

The Puridea Powerbank and Bluetooth Speaker aims to fix the issues of sharing your phone’s music capabilities with friends. Not only does it sport a good quality, (albeit a slightly directional) speaker, it also boasts a massive 8000mAh battery to provide on-the-go power.

The Powerbank and Speaker’s dimensions are 15.2cm long with a width and height of 4.8cm. It’s a bit chunky, weighing in at 340gm obviously that’s due to the 8000mAh battery, so worth every gram.

The finish is a soft-touch matte plastic with an almost rubberised feel. It’s nice. I did notice that due to the matte plastic, it does have a tendency to show off any greasy marks. So, if you’re like me and use suntan lotion, you’ll be wiping the marks off with your towel every time you top up the factor 15.

I must say that it’s a robust little blighter. During my time with it, it was dropped down the stairs (twice), knocked off the kitchen sideboard, fell off a window ledge (admittedly onto grass) and off the roof of a car onto a car park floor. Even after all that, it works perfectly and somehow there is not a scratch on it. Top marks Puridea.

Bluetooth Speaker – How it Sounds 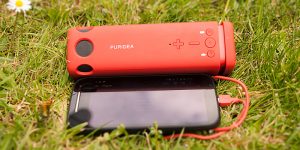 With the exception of high-end mode, generally a phone’s speaker quality is not good enough to enjoy music, videos or podcasts anywhere other than a silent room. Even then the sound is often distorted or extremely tinny with no depth or substance. This, coupled with the fact a phone’s battery will often die before the party does, the Puridea Bluetooth Speaker and Powerbank becomes a very interesting device.

Now, I’ll be honest; I am not an audiophile – music is not my forte – personally I prefer listening to audiobooks and podcasts – however, I understand the requirement of a speaker such as the Puridea is to provide as much of the audio band as possible. For my ears, the Puridea provides good bass, midrange and treble.

I tried to put the wireless speaker through as many types of music as possible as well as movies and audibooks in an attempt to pinpoint any limitations of the device’s single speaker. In all honesty, the results were much better than I expected. During quieter sections and at 100% volume on both the speaker and device, there is a bit of hiss but reducing the volume just slightly gets rid of this and you are back to good quality production.

(If you’re really interested, you can see my Spotify playlist here — feel free to comment on my eclectic taste in music!)

In all of my tests for the review of the Puridea Powerbank and Speaker, both the midrange and treble performed very well and it was the bass that generated a bit of distortion and felt a little underwhelming at higher volumes… Here’s an interesting tip though – reproduction is at its best when the speaker is in the vertical position (with the speaker pointing up, obviously) and placed on a table or something solid. I did have good fun experimenting with sitting it in biscuit tins, cardboard boxes and my shoes to see how the sound varied.. Yes, I’m that weird.

In the horizontal position, the speaker is noticeably directional, but I think that’s forgivable given the design and actually, in certain situations that can be beneficial. For example, Puridea also include a holder that can be attached to bike handlebars. In this configuration, I realised just how great this device can be, managing to use all of the Puridea Powerbank’s features at once: the holder to attach it to my bike, the battery to power my phone which was providing GPS directions (and therefore using a lot of battery) which gave me directions through the speaker and then the final main feature of a double-LED white light. 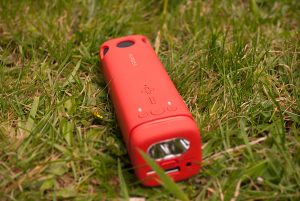 I don’t know the official output of the torch, but I’m going with “usefully bright”. I definitely felt safe riding in the dark through country lanes. Thanks to the built-in microphone, it is also possible to take and make calls hands-free with the device. Although I didn’t test that whilst riding, the clarity of the speaker was perfectly acceptable during the phone calls I made.

The Puridea Wireless Speaker has some other minor features which should not be overlooked. Firstly, it has a four-LED charge indicator which shows you at a quick glance how much remaining charge is stored within the powerbank itself. There is also a tethered micro-USB cable for charging most non-Apple devices and a full-sized female USB port to connect the likes of Apple and other USB-powered devices. (For example, I powered and charged a Lenovo Miix which uses USB to 3.5mm charger).

There is a physical switch to enable and disable bluetooth and two input ports; microUSB and a 3.5mm input jack, which makes it super simple to connect devices that don’t have Bluetooth. There are a number of buttons that sit flush, including skip/previous buttons (which double as volume up/down when holding them). There are two small buttons, one of which powers down the device when held or a double table switches the LED torch on or off. The second small button enables voice-control of compatible services such as “Ok Google” and Siri.

I struggled to find a way to truly test the battery life of the Puridea Powerbank. It’s hard to know exactly how much power you are using, the charge indicator (4 blue LEDs) is enough to let you know whether it’s time to recharge but beyond that, not the most useful! However, over the course of two weeks, I used the Puridea as a speaker for around 20 minutes a day (on average) and recharged my phone from around 20% to 100%. That knocked out one of the four LEDs, so I would say that’s pretty impressive.(You can, of course, expect your mileage to vary depending on the phone being charged and how loud the speaker is.) 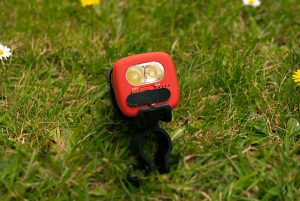 So, are there any downsides? Well, there are a couple. The first is a minor issue. The Puridea bluetooth speaker comes with the mounting bracket as I mentioned earlier in the review. Within that bracket is a clever little rubber bung that covers the ports on what would be the “front” when using it mounted – i..e. the side with the LED torch. The idea of this is to protect those ports from dust, grit and water. However, it would not seat completely in the ports so whilst riding the wind would eventually pull the bung back out.

To be fair, the second is also somewhat minor but I think warrants a mention. Given the fact that speaker’s sound is at its best whilst standing upright, this means that the ports are inaccessible so if you want to use the 3.5mm input or charge your device you can’t. The miniUSB tether can still be used as it is connected to the side of the device.

Overall then, is the Puridea Powerbank and Bluetooth Speaker a worthy purchase? If you are looking for a wireless speaker, I think this is the one. The fact that is comes with an 8000mAh backup battery is a massive bonus. If your situation is the opposite and you are looking for a backup battery, then the wireless speaker is the bonus. Both situations are ignoring the LED torch and bike mount. However you swing it, it’s a great bit of tech and I am most definitely a fan. 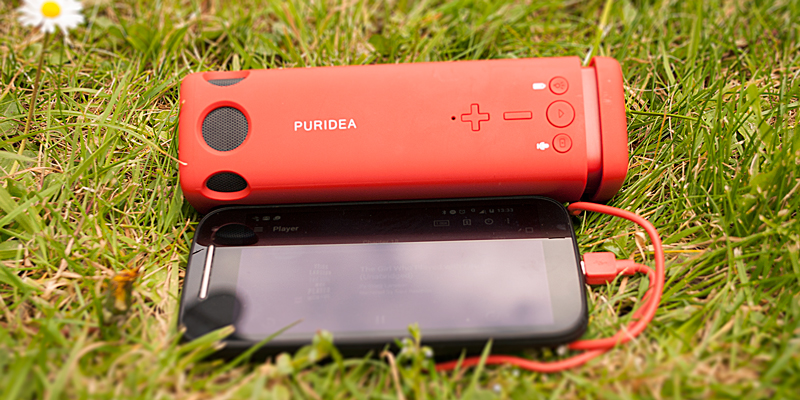