We review a lot of power banks here at MobileTechTalk but we’ve shied away from solar panel power banks for a reason; most are awful. So, with a little reluctance we embarked on a review of the Levin Selfie Solar Charger 5000 review. 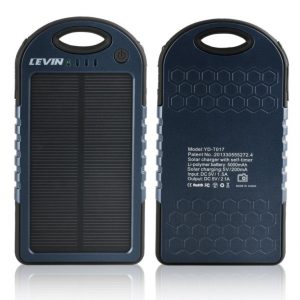 Levin wasn’t a name we were too familiar with prior to embarking on this review. They, as a company, deliver a wide variety of chargers and Bluetooth peripherals for smartphones and smart devices, and we were certainly interested in some of their other products as well – their snazzy Qi Wireless Charging Pad looks very nice as an example.

This particular Levin device, the Selfie Solar Charger, is a strange little device. It’s main feature is, as you might already have guessed, a 5000 mAh battery which can be charged via the solar panel across the front of the device. Most of the other features are largely unremarkable. On the edge of the device there is a carry loop, a USB output delivering up to 2.1a to a connected device, along with a microUSB slot for charging from a wall outlet, both with rubber port covering. There is also the obligatory flashlight which seemingly comes with almost all power banks recently. On the front face of the device is an On/Off button, as well as LED indicators denoting the charge left in the battery.

Finally, on one of the edges, nestled just underneath the flashlight, is a button with a “Camera” icon on it. This is where things really get strange – it’s a Selfie timer button. That’s right folks, just because you’re out camping in all weathers, and have a flashlight, it doesn’t mean you’re ready for anything. Powering your phone, yes, but what about that late night Selfie? Well now Levin have you covered. 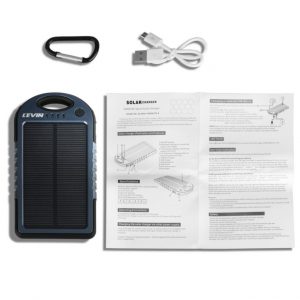 Let’s come back to that and have a look at what comes in the box.

Not a lot, but enough. The carabiner is actually a handy thing to have if you’re going off the beaten track and want to have your device soaking up the rays in order to charge the battery. A nice little touch and a guide to where this unit will be best utilised – on trips and treks outside. 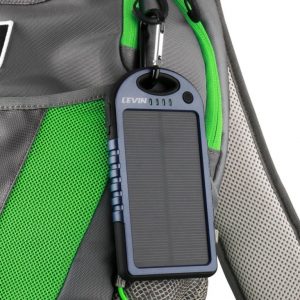 The Levin Selfie Solar Charger 500 unit is relatively small at just 142 x 76 x 13mm. It’s around the same height as a Samsung Galaxy S7 smartphone for comparison. It weighs a little less as well at just 150 grams. The unit has a nice honeycomb finish to the back of the device at both the top and bottom, with a nice plastic carved grip on the edges at the mid-point. On the edges at the top and bottom of the device is a rubberised silicon cover which adds a little grip also. There’s also a loop for that carabiner at the top of the device.

It feels acceptable in the hand and it feels very sturdy, not that you’ll be holding on to it for long. However it’s nice to know even in a sweaty or wet environment the device can be held easily without fear of slipping/dropping thanks to its design.

The On/Off button can be depressed to view the remaining charge and to commence charging, although attaching a device to the unit via the included microUSB cable also activates the device. The LEDS are relatively straight forward to understand:

In order to get to that 100% charge, you can choose to use either the included microUSB cable and connect this to a wall outlet, or to use the built-in solar charging functionality. One will have you charged up and ready to go in a couple of hours whilst the other, with good, direct sunlight, will take around 24 hours to fully charge, although after a full day in the sun you’ll be able to charge most smartphones to at least 50-60% in a pinch. 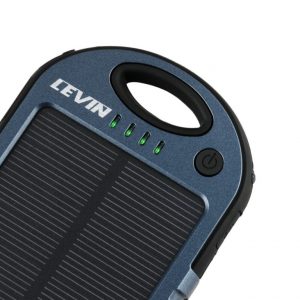 As was alluded to at the start of the article, this device is a little different to the norm. Not only does it have a solar panel, which is the main selling point of the device, it is also billed as dust, shock and rain resistant which would certainly make it an interesting outdoor companion. It also has a quirky button with a camera icon on the cover, to allow for remote selfies to be taken. Let that sink in a second………………Yes, a ruggedised solar panel-equipped battery charger has a Selfie button. What a wonderful generation we live in! Quite how a remote Selfie button on a battery charger, a solar battery charger at that, got into the design of this thing we don’t quite know.

Pair this device with your smartphone and you can, in theory, activate your shutter button on your phone and take a picture. Not only can we not really think of a scenario where holding the phone to take a selfie (as the name implies), you would prefer to reach for another device to hit the shutter button, we also failed to make this work. Pairing with both an Android and an iOS device simply triggered the volume up function.

Moving on, the 5000 mAh battery isn’t overly efficient. In our testing, we managed to charge a 3000 mAh smartphone to 100% one full-time, with a little juice remaining. This hints at an efficiency of around 60% which is well below the established 80-85% of the big hitters. On the flip side it did manage to charge the device relatively speedily thanks in full to the 2.1a output, so not a complete bust.

As mentioned, the device can be triggered by either hitting the On/Off button or attaching a device to be charged. If no device is attached after a short period of time with the unit on the device does timeout and turn off, something other devices of a similar price point still fail to do, which is nice.

Charging the unit itself via a wall outlet is speedy enough, but as already indicated, the Solar Panel does take a while to deliver any amount of charge which leaves its viability as anything other than an emergency charger, a little in question. 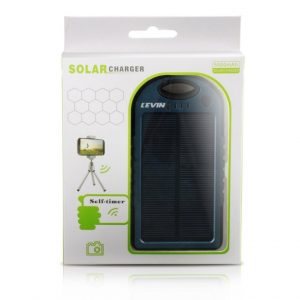 The Levin Selfie Solar Charger 5000 would definitely be better without the “Selfie” addition. It serves no purpose and even the most hardened Instagram connoisseur would struggle to utilise this feature in a real world scenario. The marketing material states that the Selfie Button provides “a very different using experience that you never have” and poor translation to one side, it’s almost spot on. It’s very different, and in our testing at least, you never have it!

In its ability to deliver the primary function of the device, the Levin Selfie Solar Charger 5000 is slightly more capable. Only slightly. The poor battery efficiency could lead to you being caught out if this device was being shared amongst a group of people, however it will do an adequate job of charging whatever device you wish, speedily. What is anything but speedy is the low, 200mAh solar panel that’s included which would take a full day of direct sunlight top deliver a charge.

A rugged unit with a nice grip, and a built-in carabiner loop (and bundled carabiner) for just £21.99 should tell you everything you need to know about this device. It’s a good little unit to have in a bad, pre-charged, to use in a pinch. However if you’re planning any long excursions, with a group of people, we’d recommend either investing in a number of these devices, or opting for something a little bigger, such as the EasyAcc 20000mAh Rugged Power Bank. 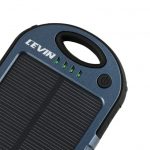 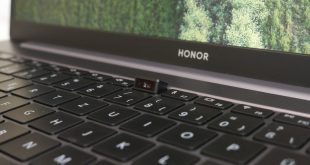