Compressive Case for HiFi Earphone, ooh catchy name.  Okay, so sexy a product, not so much but cases are what you need to keep your stuff alive.

Thanks to Penon Audio.

So I don’t know about you but one of the things that I find really important yet many companies never really get right, is cases.  Some things in the past, and I’m looking at Sennheiser, have the most over engineered cases on earth and yet manage to be practically useless.  Yeah I know the IE8 and IE7 are both going back a while but worst cases ever.  Cases are however not sexy exciting products, they are things meant to be practical and almost no one ever pays them much attention.  However I think they do matter, if you want your prized baby to live a long and fruitful life they need to be kept in a case that protects them and that is easy enough to use and above all be pocketable, so that you actually use it.  I had notice that Penon had some interesting looking cases and I thought I’d give them a little bash.

The case itself came with some other things in a plain box, so nothing fancy.  It is however rather smaller than I expected.  The Pelican type looking cases from the likes of DUNU are rather big things.  Sufficiently big they fail on the pocketablity issue.  This though, it’s a dinky little thing.  The one I have here is err, red ish.  Hmm maybe it’s a dark translucent pink.  Hmm not sure it’s the best colour but they also offer them in orange, blue, clear and black.

Its dimensions are given as 69(W)*49(H)*87mm(L) but in normal speak that means it’s pretty smallish.  Width wise it’s a tiny bit wider than an Iphone 5, length maybe two thirds the length.  It is the depth though that’s a bit more significant, it is a rather deep case compared to most.  It’s not unpocketable but it’s not going to fit into a pair of skinny jeans.

Inside, due to it being a bit deep we has a decent amount of space and it doesn’t squish things.  Also in side it’s got some soft foamy lining top and bottom too so your stuff inside doesn’t rattle about.  It should be easily enough for most of not all IEM’s even big things like customs should make it okay.

The case is tough, very tough.  The thing is some “polymer” but whatever it is exactly it will survive impacts better than I think you would.  I don’t see how you could break it without intentionally doing so and with some tools.  It is very solid.  As a bonus the inner lip of the lower section there is a rubber seal so in theory, its water proof.  The call it “weather resistant” and while I’m not going to go swimming with it if your camping in some rain-soaked jungle or whatever this should do a great deal better than your typical zip closing case.

Clocking in at a hair under US$12 it isn’t clearly the cheapest case you can find.  However it’s a nicely usable size and it would appear to be extremely resilient.  I squeezed it as hard as I could and it flexed a little but lived.  Most cases if I tried that they would be squashed flat.  This is very VERY sturdy, not to mention “weather resistant” so if you want to protect something in a bag that needs to survive airport handling or I don’t know, you’re kayaking or you’re just insanely clumsy.  It’s not the cheapest but it will survive things you wouldn’t.

Well as cases go it is supremely functional and practical.  It’s even got some strap feed through so you could attach it to the front straps on your backpack.  I’m not the sort of trekking up a jungled mountain as cases go this seems pretty indestructible.  I mean I don’t want to stamp on it to find out if it’ll survive but I think it probably would.  I’d surprised if anyone kills one of these short of being in a car crash.  It is also nicely functional as I’d want from a case.  Sure it’s a bit thick for many pockets but I was fine having it in my jacket.  Perhaps not my first choice as it is a bit thick and I’m not usually falling down flights of stairs so its level of protection might me a little overkill for most.

So buy one?  Sure, absolutely.  While it might be overkill protection for most people in most situations I’d rather have too much protection than not enough.  Yeah it’s a bit thick but its sturdy as hell and above all else that is what I want from a case is to protect what’s inside it, that it does with aplomb. 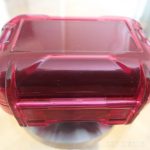