The Chuwi Hi9 Air 4G tablet is the latest in Chuwi’s line up to boast an impressive array of specifications for a relatively low-cost, but in the age of Chromebooks and dual-boot Windows 2-in-1’s, is there any room in the market for an Android tablet that isn’t from the Samsung, Huawei or Google stables? We take a look in our full Chuwi Hi9 Air 4G review

Disclaimer: Due to a corrupted SD card I lost a lot of the screenshots and pictures of this device, however I wanted to give my thoughts and review this anyway – apologies!

I still remember the feeling I had when I picked up the Motorola Xoom, my first Android tablet. It felt hefty but durable, functional but stylish, and I actually adored the Honeycomb 3.0 Android OS it shipped with, despite its foibles. It was during my Xoom ownership that I came to the conclusion that for productivity to any level, a tablet just wouldn’t cut it. I needed a keyboard and mouse, the functionality that desktop applications delivered and performance that a tablet simply couldn’t deliver.

That conclusion was drawn in the Spring of 2011, and since then the only tablet I have used to any great degree in an attempt to challenge that view was the Xiaomi MiPad back in 2014. I did prefer the MiPad with its glossy finish, and slick performance, but the software was still growing on Xiaomi’s MIUI back then, and the productivity concerns remained.

So fast forward to 2018, and Gearbest had a great price on a Chuwi Android tablet, so I thought I’d give it another go. Chuwi is an interesting company I’ve been following for the last 12 months or so. Yes, they seemingly learn from many other manufacturers in the same space to produce their own variants, but the price point and the specifications included in their hardware looks, on paper, compelling.

When the Chuwi Hi9 Air 4G tablet got dispatched, stalled in customs, moved onto a UK carrier and finally arrived in my hands, it reminded me of a Xiaomi product in terms of the packaging. That is some indication for where Chuwi sees themselves in the market. That’s the market segment they are aiming to disrupt, and that is why you can find many similar or alternative Chuwi products to their Xiaomi counterparts.

The Chuwi Hi9 Air 4G tablet felt a little flimsy on the first hold though. It does have a heft though, at around 550g, however, whilst the material choice on the rear is aluminium, it feels very thin, and the plastic shroud covering the SD/SIM card slots on the top of the rear is incredibly flimsy. I could easily see this being broken in continual use.

The screen is big and is relatively crisp thanks to the 2560 x 1600 (2K) display, but the brightness bar could do with being raised a little. 4GB of RAM is ample for the majority of Android applications in isolation currently, and the Helio x20 does well in dealing with most applications on a day-to-day basis.  More on this later.

Taking a brief tour around the tablet, at the top of the rear of the device is the aforementioned 13MP camera which is surrounded by a plastic shroud which covers the SD and SIM card slots, and is flanked by the microUSB charging port, the 3.5mm audio jack and the stereo speakers at either end of the top edge. Sadly no USB Type-C here. Another slight annoyance is the lack of HDMI out, a trend that is seemingly prevalent throughout the lower priced devices.

On the right-hand side are the volume rocker and the power buttons. Being plastic and non-textured is not a great combination, but they are clicky enough. Just below them is a pinhole microphone. Finally, up top on the front side is the 5MP camera which is acceptable for video calls, but nothing stellar at all.

Incidentally, the automatic brightness was originally broken, but this was fixed after an OTA update, something you can expect from time to time from Chuwi, but I wouldn’t count on it. This is not too much of an issue currently as Android 8.0 Oreo ships out of the box, but the security patches will get old fast, and it remains to be seen whether Chuwi will keep up with them. 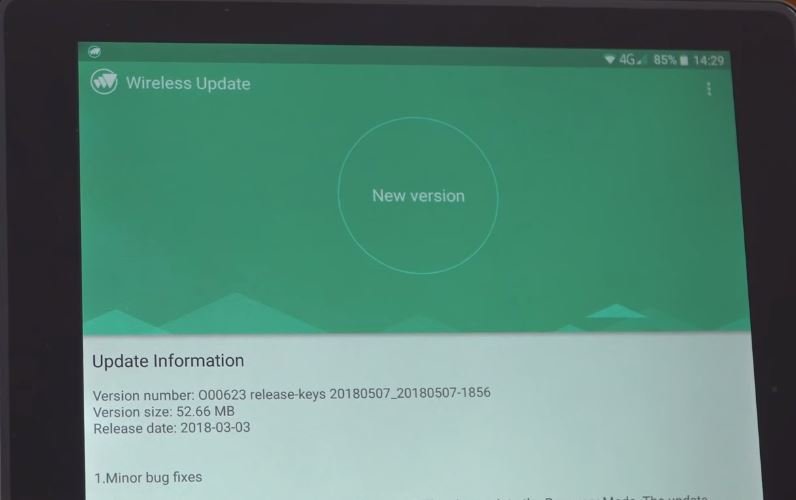 That 10.1″ display can be put to good use in media consumption sessions, but the 16:10 aspect ration will leave you with the black bars and therefore cause a few issues in terms of immersion. Another quirk I found during my use of this device was scrolling or actuating touch responses from the display itself proved inconsistent. In one session I’d be typing using a large on-screen keyboard only to have every letter added I typed being displayed multiple times with others simply missed. If I slowed my typing down, the keyboard (I tried Swiftkey and GBoard for what it’s worth) would accurately detect my key presses. Thinking it was just me, I continued to use the device as usual but then noticed that swiping and generally touching icons sometimes failed to register, or registered long presses. The long and short is that the input layer under the glass is incredibly sensitive and there does seem to be some input lag at times here. It wasn’t a great experience. Add to that the strange friction felt when moving your fingers across the screen and the conclusion is that the glass is also of low quality.

Having a largely stock Android 8.0 experience was something I was very happy to see, however. With the Google Play Store out of the box, you can also grab all the applications you want which isn’t always the case with these imported and lower cost Android devices.

The hurdle you will come up against however is the scaling on the Chuwi Hi9 Air 4G tablet. Chuwi have set a DPI that causes silly scaling of certain applications. The Camera is the biggest culprit here, and although the DPI can be changed in the developer options once enabled, finding a DPI that suits everyday use and doesn’t cause corruption in other applications is a painstaking and frankly inefficient task to engage in. 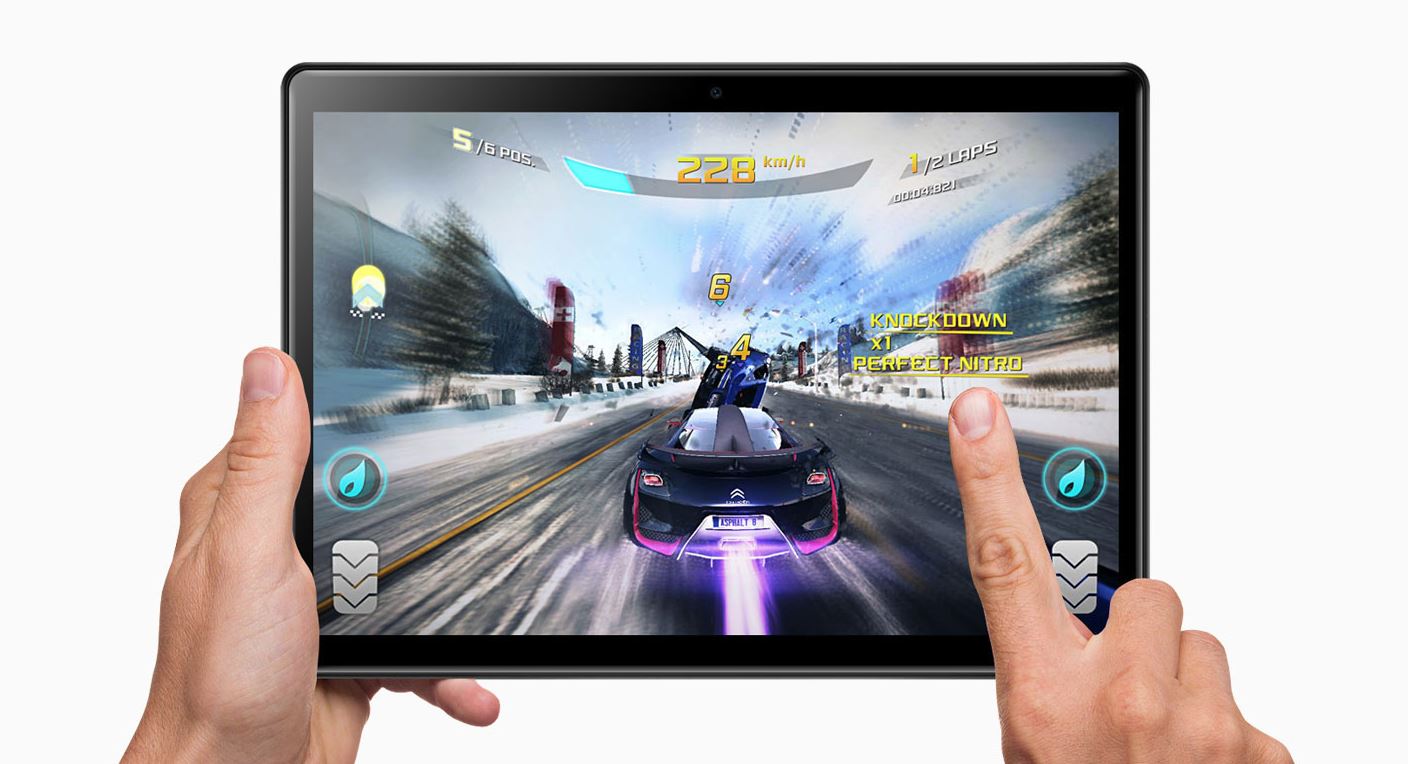 If you get over that particular issue though, you should be good to go right? You’ve got a Helio x20 processor which is an 8 Core CPU, ample RAM and storage, and a large display to boot? Well, you should be good to go, but the performance simply isn’t there. I’m going to say right off the bat that I’m putting this down to poorly performing storage. I don’t have the benchmarks to prove this as I didn’t have the time with the device I wanted to before moving it on, but this is normally the case in lower cost devices, and it’s understandable from a marketing perspective. When have you ever seen the speed of the storage called out in smart device marketing messages? You haven’t! It’s always how many cores something has, how many gigabytes of RAM it has, and battery life. The truth is that in 2018, storage is as crucial as processing throughput and it’s something that the top tier manufacturers understand and these lower end houses cut corners on.

The end result manifests as a re-emergence of the dreaded Android lag, but that is disingenuous to the Oreo OS on board. Switching applications is not a smooth process, often with multiple seconds elapsing between pulling up the recent applications, selection of another application, and that application being drawn on the display. RAM works well with many applications being able to be stored in memory without reloading them. Chrome browser is a perfect example of performance here. Load a page such as the BBC homepage, and scrolling will be lethargic, to the point I’ve often switched to my phone to read the same article. That’s far from a compelling message.

When you are consuming media on this device the stereo speakers aren’t too bad at all, they just don’t break any boundaries. I’d still suggest a pair of Bluetooth headphones or a mini-soundbar to get the most out of these, or you could even just use the good old 3.5mm audio jack for wider compatibility.

Then we get to the camera. I’ve said it before on social media and I’ll say it again here; don’t take pictures with your tablet. Just don’t be that person. No, not because you’ll look stupid in front of anybody and everyone in the vicinity (you will though) just because camera units on tablets are, as a rule, not good. The Chuwi Hi9 Air 4G does nothing to buck this trend either. The included 13MP rear-facing camera takes very poor shots in good light with lots of grain and noise. Low light is a no go. The 5MP front-facing camera is what I’d call acceptable for video calling.

Battery life is good here though with a good 7-7.5 hours of in light use with around 2.5 hours of screen on time to be extracted from the fully charged 8000 mAh battery. That drops down to around 3.5-4 hours when gaming is involved. Once the juice has dried up, putting this on charge to fill it back up will take a few hours. No fast charging here and a microUSB port to boot!

Finally, the major selling point of this over other similar tablets is the connectivity aspect. Most Coffee shops and other venues have WiFi now, and you can connect to it from your Chuwi Hi9 Air 4G using either 2.4Ghz or 5Ghz bands where available. If you find yourself in a WiFi black spot, however, fear not, the 4G capabilities of this device mean you can throw a SIM card in there and away you go. The truth is that the radios, in all cases, are a little lacklustre. They work and you do get connectivity, but the speeds from both the Wireless and SIM connections are a fair bit slower than you’d on a 2018 mid-tier upwards smartphone. They do manage to get the job done largely and your mileage on the 4G front may vary on carrier, bands used and location.

I wanted to see whether owning an Android tablet in 2018 was too dissimilar to that of 2011, and I got my answer. Yes, it’s completely different. There’s more connectivity, more applications that work with tablet-focused content, and the software experience is better. Sadly, however, I am forced to come to the same conclusion that for me, Android tablets just aren’t going to cut it.

Looking specifically at the Chuwi Hi9 Air 4G device, there are some nice things at the sub-£200 price point it comes in at here. The display is relatively crisp and is a large 10.1 IPS unit. 4GB RAM on a tablet is a nice to have, as is the Helio x20. The performance just isn’t where it should be for those specifications however and I was often left wondering whether my Motorola Xoom would have managed any better in a proportional situation.

Touch issues, no HDMI out, weaker wireless connectivity than top-tier units, and a sluggish multi-tasking experience all took their toll on me during my time with the device. The bright sparks here though are battery life, Android Oreo and the fact there are some OTAs which might bode well for the future, as well as the sub-£200 price point.

This device isn’t aimed at the power user, it’s aimed at the casual social media user, the Wikipedia user, the iPlayer user. Attempt to get down and dirty and ask the Chuwi Hi9 Air 4G to roll it’s sleeves up and it’s likely to go on strike for you, but treat it well, be aware of its limitations, and it could be considered a decent purchase if you have the right use case. Just not for me.