Back at The Gadget Show Live 2016, we spent some time at the Boosty stand understanding exactly what the product offered and the unique selling points. Fast forward and we’ve had time to spend with one. Read on to learn more about Boosty. 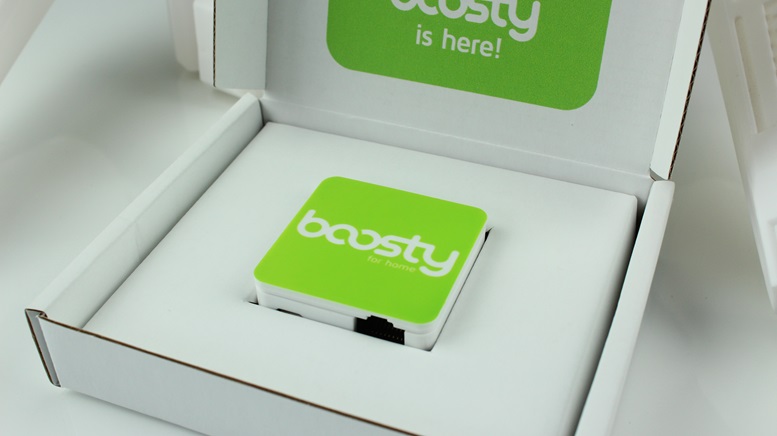 We lay it all out here in a brief interview with the Paul Evans (CEO of Boosty), but essentially Boosty is a small device that allows the bonding of slow, poor performing broadband lines with the users Data plan from their Smartphone. To learn how it works, listen and look below.

As this was a review unit we received slightly more than the average individual might, however a consumer will receive a user guide, a USB cable for connecting and passing through power from the Router to the Boosty box (if you don’t have a USB port on your router, you can use a standard USB plug outlet but it’s not supplied) and an Ethernet cable. 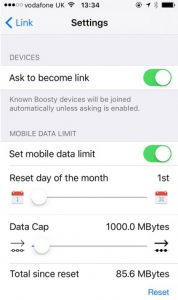 Setting up Boosty technically is quite simple if you know your way around technology, but the handy user guide helps if you don’t. Simply plug-in the Boosty box to your Router via a spare Ethernet port, connect the USB cable to the Boosty and a USB outlet on your Router or wall adapter and lights should start flashing!

After that, grab hold of the “Boosty Link” app from the Google Play Store or Apple’s App Store and fire up the app. Within the app you can make the configuration that makes most sense to your data plan, and cap the data that is used to augment your broadband service.

After that, activate Boosty and your device will be properly configured and activated. Next step – MyBoosty.com.

Additionally, you can make use of a 3G or 4G dongle instead of using the app if you so wish.

Heading over to myboosty.com will see you logging in with a username/password and having a dashboard within which you can easily understand how your device is delivering value to your home broadband. You’ll see connected devices and the total throughput.

During our limited testing, Boosty managed to give our test subject a marked improvement delivering 12 Mbps  in total throughput where a Plusnet line only gave 3-4Mbps. This was however after engaging Boosty’s “Turbo Mode”.

You see Boosty takes a “least cost routing” approach. Those familiar with networking would have heard of this approach to routing traffic across a network through the least number of nodes/hops. In this case however, least cost means exactly that. Boosty presumes the Broadband is a fixed cost and attempts to utilise the Broadband line to it’;s maximum, only asking Boosty to intervene and supplement performance with mobile data when it absolutely has to. Pushing Boosty into Turbo Mode makes the product utilise mobile data much more aggressively and effectively abandon its least cost methodology. Be warned! Anybody with a fair use policy or a capped data usage plan should stay clear of this mode.

This feature is controlled via the myboosty.com portal.

Another nice little feature of the myboosty.com portal is the ability to whitelist/blacklist connections. Let’s say for instance you want to reserve the enhanced performance the bonded connection can provide to just a few select devices (a laptop and a smartphone for example) you can simply untick the other detected devices from being able to be connected to the Boosty platform, and your work is done. This is specifically handy when you share a broadband line with a house full of other people and you want to maintain the integrity of a specific connection.

So Is It Worth It? 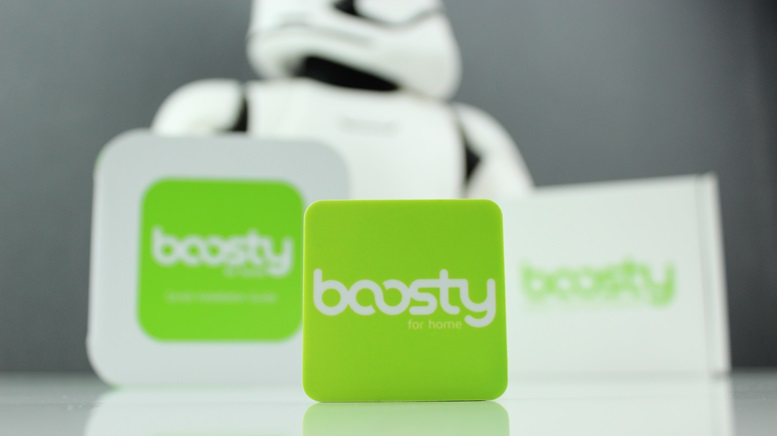 We loved the idea when we first spoke to Boosty, and we still do. It’s a relatively easy product to set up and the results can be dramatic. Keep an eye on that mobile usage however as if you’re on any sort of capped plan, regardless of the cap you assign in the app, you may find that you don’t have any data on your mobile device when you’re out and about as Boosty has eaten through it. Be sensible about assigning a cap here, and if at all possible, get a dongle instead.

The only slight issue we had with the device was the fact it was limited to quite a low Mbps threshold. In our local testing, we used a limiter to reduce the throughput of our 150Mbps VirginMedia line down to just under 5Mbps before Boosty would kick in and assist. We’d like to see a little more flexibility with this as performance on a 20Mbps line can be intolerable thanks to packet loss issues with certain providers and the product could at least help in this regard.

We were reminded of the good old days of bonded dial-up modems when using Boosty. The end result, in concept, is very similar to what Boosty delivers but with some clever technology to integrate a management platform on top.

In short, if you have a dongle or an unlimited mobile data plan, and a dodgy internet connection – grab one! 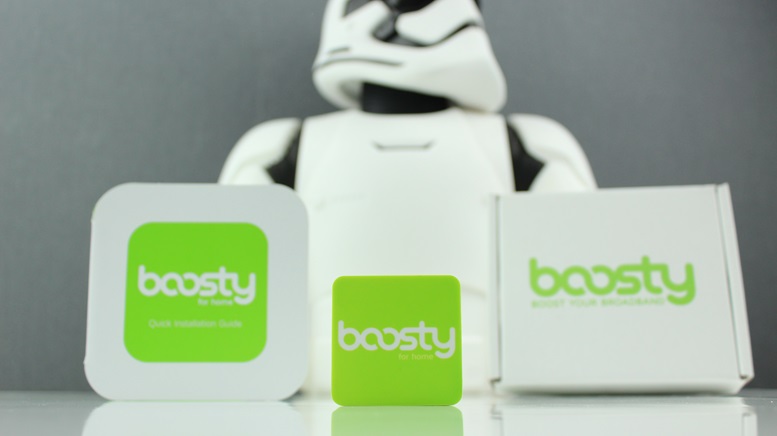