If you’re anything like me, you remember the good old days of anti-virus products with definition file updates and zero-day attacks aplenty. Couple that with a one-off cost for the application, which needs to be paid for each year and those good days could be filled with risk. We knew no better then though did we? I’ve been using Bitdefender Total Security for a little while and thought I’d show just how far security suites on PC have come.

Bitdefender Total Security
+ FOR
- AGAINST

Bitdefender Total Security suite was used for a 1-week period as a trial before upgrading to the full premium edition. Bitdefender sponsored the premium code to allow this review to take place. The review is based off my own opinions and findings during the review period and Bitdefender have had no input or visibility of the review prior to publishing.

Bitdefender Total Security aims to deliver just that; it’s in the name! The Total Security of your endpoints (machines) is the primary focus of this application. Antivirus is only one of the areas that people need to be wary of now. Attack vectors are ever-increasing both in quantity, severity and complexity, and applications such as Bitdefender need to continuously adapt to keep you safe.

Bitdefender Total Security is so much more than just Antivirus. Have a look down the feature list below, it encompasses so much more to keep your estate protected. Bitdefender has a number of security products such as Internet Security and Antivirus (Plus) which deliver very focused protection in given areas where other avenues might already be protected, but only Bitdefender Total Security gives you broad-brush protection from their range.

At the time of writing a 5-device license with a 1-year subscription to their service is available for £19.99.

One of the first things I noticed when starting to use the product versus the Bitdefender products I’ve used in the past is their model has changed. They are moving towards a tried and tested rolling update model – think Microsoft 365. It’s very similar in that as and when features become available, they are rolled out to users who are subscribed to the service. Subscription models seem to work for most and it’s nice that Bitdefender has adopted this too.

To start, simply download the product once you’ve picked your required licensing level and subscription term, and install the product. You’ll be greeted with a splash screen which contains all the information you need to get going.

Bitdefender will perform a system analysis the first time it fires up and will give you an overview of just how protected your system(s) is and what you need to do to strengthen your protection and reduce your risk profile. For new users to the world of security, this is a really easy introduction, with only a hint of the scare tactics employed by some freemium services. The initial assessment can take up some significant resources depending on your system, so give it a little bit of space in the beginning – grab a coffee! Thankfully, daily performance continues as you would expect with little to no noticeable hit due to Bitdefender’s underlying protection.

After that, create a Bitdefender account and away you go! 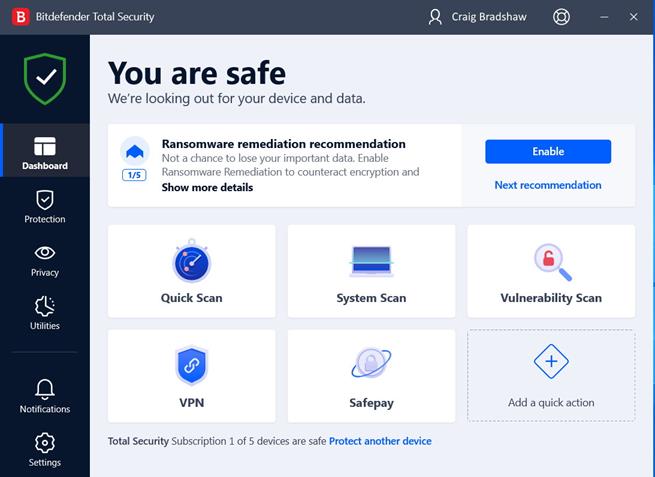 Easy to access panels are available along the side of the UI, with the sections clearly defined and easily understood. The main dashboard allows quick-access scans and protection, while the “Protection” and “Privacy” sections delve into more detail. Control exceptions in the Antivirus panel and analyse your system in the Vulnerability panel. Check for open ports in the Firewall panel and protect against a crypto attack in the Ransomware Remediation panel.

Antivirus – It’s More Complicated Than It Used To Be

Antivirus protection is no longer a simple affair. There are multiple attack vectors, multiple attack types and these are changing and mutating second-by-second. AV is no longer the only vector to consider. Under the banner of Protection, Bitdefender includes online attack prevention, certificate checks, and performs multiple known threat lookups too. It’s a bigger, scarier world out there now than just worrying about somebody getting onto your machine with a USB stick!

With an update period of 1 hour, we’ve seen tighter protection on fully Cloud-based protection product, but these cost much more than Bitdefender and work in a completely different way.

Ransomware – Protect All the Things

The Ransomware Remediation protection is worth spending a little more time on. If you are hit by a ransomware attack, what can you expect? It can manifest in a number of ways, but most often, your key system files and data will be encrypted, and you’ll be asked to pay the attackers a fee for the decryption code to get your data back. In 2020, Foxconn, Barnes & Noble and Canon were just some of the large companies to be hit by Ransomware attacks.

The first tip; if this happens, don’t pay. You will be flagged as a “willing” victim and no doubt targeted again. Of course, if your data is that sensitive or important it may seem like a worthwhile sacrifice. If you want to avoid getting yourself into a sticky situation like this, there are a couple of things you can do. Backup all of your files to another location (external USB or Cloud backup for example). If your device gets hit, you can access that data from another location. Bitdefender’s take on ransomware protection is to firstly maintain backups of critical files. Those files are then monitored for activity and as soon as encryption is attempted the Ransomware Remediation kicks in. Should the attack be foiled you’ll be notified. If the attack continues past a certain point, Bitdefender will simply roll back the files from the back and provide your data for you. By default, the Documents, Pictures and Videos folders are protected.

Access to a VPN these days is all the rage. Whether you’re a tinfoil hat-toting conspiracy theorist of perhaps you just want to watch the Korean Netflix drama you can’t get in the UK, VPNs are essential for privacy. The one-click approach by Bitdefender provides not only an easy entry point, but a fast and reliable connection. In my testing, I was receiving the same speeds through the VPN as without. By default, there is a daily limit of 200MB which can be upgraded for an additional fee. At the time of writing, the upgrade costs users £29.99 for a 1-year subscription which provides unlimited traffic across your protected devices, through 1300 servers worldwide. 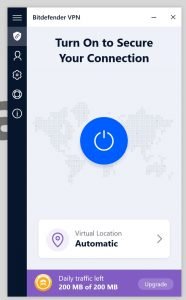 200MB is paltry and this really should be reviewed if it’s bundled with the product. I’d have like to have seen 1000MB given the speed of connections available to people now. 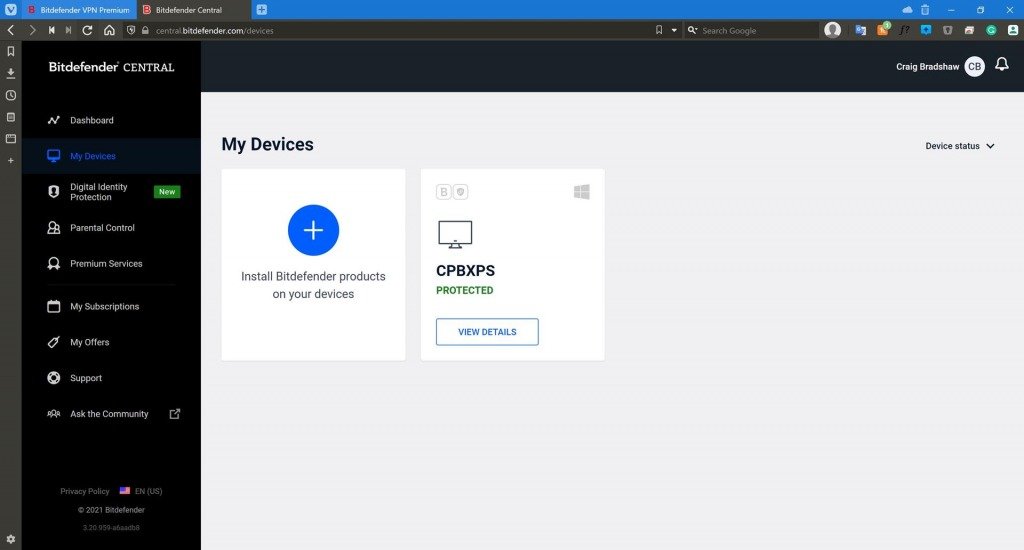 Using the Bitdefender Central option in the dashboard, users can manage the workstations Bitdefender is deployed to remotely.

The subscription (to change plans accordingly) can be managed as well as a number of other features, centrally, hence the name. Get an at-a-glance view of threats related to the devices. Other helpful features such as remote wipes/locks, remote scans and optimisation can be performed via Central too.

There is more under the hood of Bitdefender Total Security than just the standard offerings above. For your £19.99, you get some serious value adds too.

Multiple profiles allow users to switch between levels of protection. For example, the Work profile is aimed more at protecting your email and productivity use during the day, but switching to Mobile profile in the evening limits background tasks for your Netflix session to be as crisp and uninterrupted as possible. It would be nice to be able to configure these profiles completely but just having the option is nice.

There’s more too. File Shredder looks to ensure that your deleted files are actually deleted by writing over the relevant blocks of data and One-Click Optimiser will look across your system and eliminate any wasted space by removing files that are no longer needed (such as installer files). Dig deeper and explore the Video & audio privacy protection and Password Manager features.

Finally, there’s a nice little nugget sitting in the settings of Bitdefender that made the product a little more endearing to me. There’s a toggle to turn off “Special Offers”. With a lot of products you get banner ads, and “Black Friday” deals hitting the screen with relative consistency. Toggle this setting and you will no longer have a full-screen application lose focus! A nice touch that more product such as this should include.

Bitdefender Total Security really should be considered as a home/so-ho solution for those wanting to secure multiple devices. Being available for PC, MAC as well as Bitdefender Mobile Security for iOS and Android operating systems too, means you really protect your most critical devices all under one, reasonably priced, subscription.

The ease of use of the UI, and the user-friendly wizards to guide the user through increasing the security is what I’d expect, but seeing much more expensive products fail at that, it should not be taken for granted. Equally, the sheer number of features that are actually useful within Bitdefender Total Security is not to be sniffed at.

The VPN allowance could be bigger, and the AV update frequency could be tighter than the 1-hour included. Alongside this, there are some gaps in terms of Digital Identity Protection – this is not included in their “Total” suite, but for the price, I have no problem recommending Bitdefender for most home or small business users. 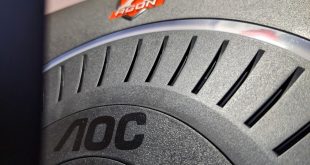