We’ve covered Besiter products before such as their Lightning 4, but the Eclipse 4 is it’s slightly more pocket friendly and quite a bit more wallet friendly cousin. Intended for a little more portability the Eclipse range comes in a variety of charging capacities. We’re looking at the Besiter Eclipse 4 10,000 mAh variant in our full review.

A huge shout out to Kavson whom we met at The Gadget Show Live 2016, and have provided this unit for review. They’ve got an ever-increasing range of mobile technology and peripherals so head on over to their site and check out their products.

The Lightning 4 was a sleek and cubed 10,000 mAh capacity power bank, for those wanting something a little slicker than your average. The Eclipse range isn’t what we’d call opposite, but it is distanced far enough from the Lightning range to appeal to a different demographic. That does sound a little preposterous to say considering they are still just power banks, but as our fruity friends over at Cupertino have taught us, we’re all quite vain when it comes to accessories. 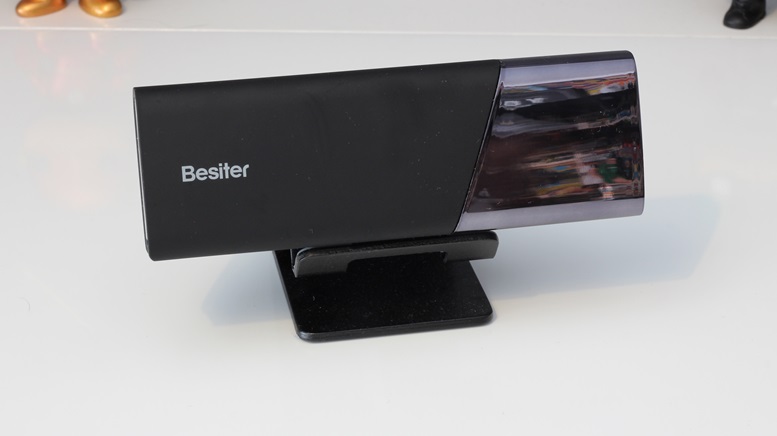 We mentioned from the outset that this is a little more portable than the Lightning 4, but that’s not to suggest it’s light and fluffy. It weighs in at a smidgen under 250 grams, and stands at 15.1 x 2.3 x 5.2 cm dimensionally. It still feels substantial but not as heavy as the Lightning 4.

There is a textured plastic finish on two-thirds of the device with a reflective faux-metallic material across the remaining portion. On that end of the device are the two USB ports; both 1 and 2.1 amps called out but the device can intelligently decide on the power output dependant on the device attached, to a maximum of 2.1 amps. Moving down the devices edge finds the integrated LED display, a micro USB charging port and the incredibly bright LED strip consisting of four separate LED lights. The bottom edge reveals a little more information about the device such as the model number and capacity. Other than a subtle Besiter logo, there is not much more going on here. It’s an understated design.

The box contents consist of the device itself, a micro USB cable and a quick start guide. Nothing out of the ordinary.

Let’s just get straight into it shall we? This unit charges any device with fast charging, incredibly quickly. It doesn’t come with Quick Charge capabilities like the Lightning range, however it managed to deliver speedy charges to our Nextbit Robin, Oneplus One, and iPad devices during testing. Very impressive charging speeds although it is a little sad to almost visible see the remaining juice in the power bank draining thanks to the integrated LED display. We’d rather speedy charging though! 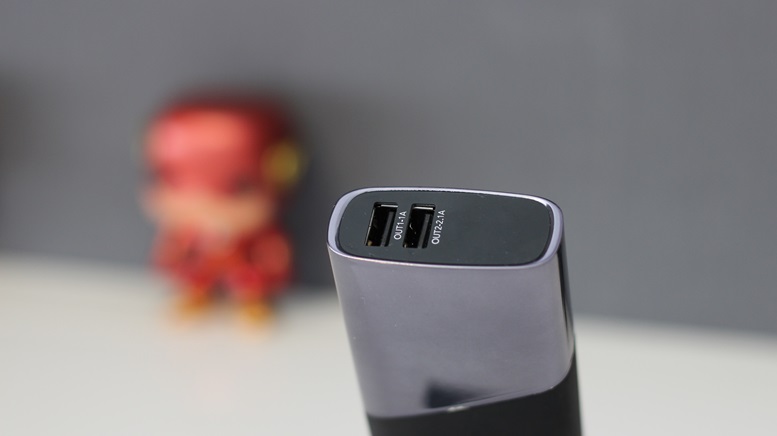 Using our Nextbit Robin as a baseline here, we managed to rattle off two full charges and a charge to just over 75% (all from flat) using just one charge on the Eclipse 4. The eagle eyed amongst you will already be sitting there asking why it wasn’t well over three full charges. Just like any other battery, there is an overhead in the energy production and some chemical wastage from the process too which means 100% efficiency is simply never going to be the case. The Eclipse 4 manages around the same level of efficiency as the Lightning 4 did in our testing, that being over the 80% mark. This is an acceptable efficiency rating, and is reliably accurate charge after charge. 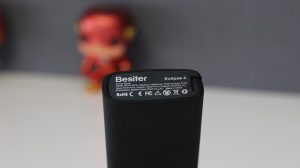 Due to the Eclipse’ multiple USB ports it can simultaneously charge multiple devices, as you’d expect of any power bank in 2016. Likewise intelligent charging is here also to allow the device to charge at the optimum rate for the connected device regardless of its port. The port ratings only really come into the equation when multiple devices are plugged in and the denoted ratings start to be enforced.

The integrated LED is quite muted in actual fact, accessed in a rather cumbersome way. Shaking the device will reveal its remaining charge as a percentage, and will linger for 5 seconds before powering off again. It’s great to have a logical and granular indicator of the remaining charge but we couldn’t help feeling a) a little silly shaking the device and b) that an integrated button might have been a better option. Either way, we’re happier it’s there than not.

“May it be a light to you in dark places, when all other lights go out.” – This LED strip must have been what J.R.R Tolkien was talking about.

Carrying the device is simple enough. The curved yet narrow design makes it an easy fit into a bag, purse or even a pocket if you’re feeling adventurous; it might be a little big for a Jeans’ pocket for example. Its material provides grip, and with the flat ends can be stood up on a desk. This is essential to make proper use of the integrated LED strip for lighting, and boy oh boy does it illuminate. 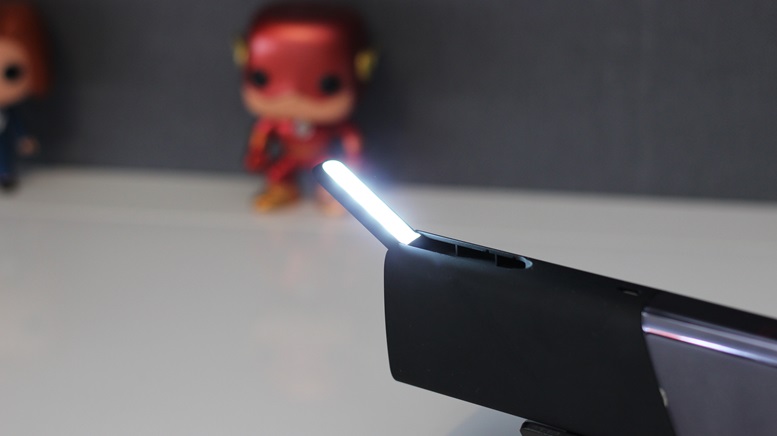 This strip of 4 separate LEDs is so bright the device could double as a defensive weapon should one be set upon by an opportunistic would-be gadget thief! The strip is accessed by a clever pull out mechanism which otherwise sits flush with the angles of the device. Once opened, the LEDs are enabled and they sit at around 45 degree to a flat surface. The angle of the LED strips can be altered along the vertical but there is no rotation allowance. We see a lot of integrated lights in power banks, and for the most part they are nothing more than gimmicks. However this particular feature is one that we’ve actually made use of during testing and in fact utilised during the editing of this very review.

The downsides? There aren’t really many and we were stretching to find some. The only minor issue we found was that the reflective coating on the device had started to scuff and be chipped during out usage over the two-week review period. The unit was in a bag most of the time with only minor exposure to anything that could have caused this. Upon inspection a human nail can indeed scratch this surface, so that’s something to be aware of it the aesthetic of this device is more important than it’s functionality.

The Besiter Eclipse 4 is another sound offering and at £18.99 for the 10,000 mAh variant, comes in at an acceptable price point. Besiter deliver many power banks to the market and they all have specific market segments that they are aimed at. The Eclipse range seems to be angled towards the professional.

Aesthetically it’s acceptable, and it has enough clout in the 10,000 mAh capacity to last said professional for a trip of a good few days assuming most devices can get through a business days’ use. Additionally however, the integrated LED strip is one of the best we’ve ever seen on a device such as this. Again, we’re sure the use case for that LED will be few and far between but we actually found ourselves using this for more than just the purposes of reviewing the device.

The form factor, being an almost squared off cylindrical shape if that’s not too much of a misnomer, is again another indication of the professional nature of the device. It’s almost infinitely easier to stuff a narrow object into the corner of a bad than try to fit a squared object in somewhere.

So overall another great offering from Besiter and it has just enough differentiation from their other offerings to appeal to a slightly different demographic. In short, pick one up! 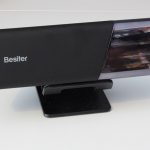