Aukey release another Bluetooth speaker, this time with a few added features, improved battery life and a decent price point. Let’s take a look at the Aukey SK-M12 Bluetooth Speaker in our full review. 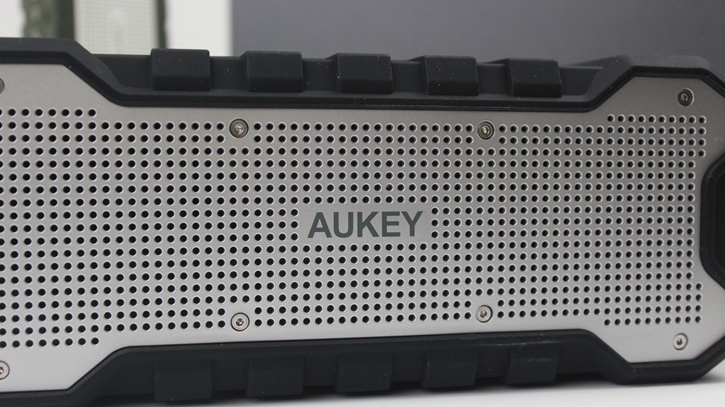 When we saw Aukey had released a water-resistant Bluetooth speaker, we thought “we’ve covered them before”. When we read further and saw it had an output of 10W via dual 5W speakers, our interest was peaked a little more what with Aukey safely playing in the sub-10W space most of the time. The feature that made us want to look at this a little more closely however was the claimed “up to 30 hours of playback”. Okay Aukey, you have our attention.

The SK-M12 (sexy name, we know) doesn’t have the same design aesthetic as the other devices we’ve reviewed from Aukey. They are usually content with glossy plastics, or robust aluminium, but in their water-resistant products we do see a more rugged, rubber construction. Here, Aukey have opted for something of a combination and we’re not quite sure whether it works. Rubber coated metallic grilles don’t scream premium in 2016, but then again, this isn’t a premium-priced product.

Across the top of the somewhat-cuboid-shaped product are a set of easily accessible and identifiable function buttons, with the Next/Previous track keys doubling up as Volume -/+ keys with a long press, a call receive, power on/off and a menu button finishing off the line up.

On the front of the device is the metallic grille that you’ll either love or hate. The backside is identical too. Also, above the Aukey logo on the front is an LED notification light behind the grille that indicates the Bluetooth connection and charging status.

Across to the left hand side there’s a rubber port cover hiding the microUSB charging port, a 3.5mm AUX in, and a small pinhole reset switch. On the opposite edge, there’s a plastic eye for hooking on to a bag, or using a lanyard-type solution. We’d pay good money to see somebody walking down the street with this dangling around their neck, Flava Flav style.

Even more interestingly, on the bottom of the device is a mounting point presumably for a stand or sorts.

We won’t go into pairing as it’s incredibly straight forward and the manual included gives more than enough detail around this. Suffice to say it’s simple!

Let’s get to how the Aukey SK-M12 speakers actually perform. Their dual 5W speakers should provide some serious power if previous, lesser Aukey devices are anything to go by. They do, they’re loud, and they’re brash. Playing a mixture of Hip-Hop, Pop and Dance tracks displayed a sound signature that was a little disappointing in some areas and amazing in others.

The Bass here is poor. There’s no sub here so that might have been expected, but at a 10W output we were expecting at least a hint of rumble. Instead there’s a brief peak at the height of the bass output and then it’s gone. Nothing lingers, nothing’s crisp. It’s a shame as the other aspects of the output are promising. Highs and mids can get very crisp with some bleed between the two in more dance type tracks, but on the whole it’s not too bad. Furthermore, these get loud. Not one person sitting in a room loud, but a bunch of people dancing in a living room loud. The 10W output certainly does make a difference here. Aukey, for volume level – achievement unlocked! Very good.

Finally there’s distortion, and the Aukey SK-M12 doesn’t escape without a chiding here. Depending on the surface this unit is placed on, the internals can resonate different and cause a rather niggly “whine” during playback. We tried it on a wood surface, concrete and carpet, and thankfully only found the issue on wood (any type), but it’s still there. This seems to suggest that the rubber isn’t of sufficient quality to coat the metallic chassis perhaps? As you crank up the volume to 11, you’ll get a little bit of generic distortion too and the mids and highs will bleed more than at other times. To be expected with a product at this price point so we won’t be too critical here.

The Aukey SK-M12 has other tricks up its sleeve though. It’s water-resistant. No, it’s not water proof, so don’t take it with you into a pool, but having it on the side, with an occasional splash should see it cope admirably. We splashed it a few times whilst it was playing from a tap, and it was fine, but we stopped short of submerging it – there is no IP rating called out anywhere but if there were we’d have to guess at something around the IP67 range.

Now on to the best part of this device. The integrated 2600 mAh battery (yes, soak that in a second!) claims to be good for up to 30 hours of continuous playback. Okay, claims are all well and good right, but what about real world use. Well, we tested with the 24 hour Nyan cat video on YouTube (yes we stopped watching after 3 minutes so as not to headbutt the monitor), starting at a full charge. After coming back to the device a full day later, the video had finished, and the device had turned itself off. It does that after 10 minutes of inactivity. When we turned the unit back on, we managed to get another (almost) 3 hours of playback before the red LED notification indicating the battery was low, started to shine. So, taking that as gospel, that’s over 27 hours of playback there. 27 hours! Immense, and the perfect companion for days at the beach/pool. 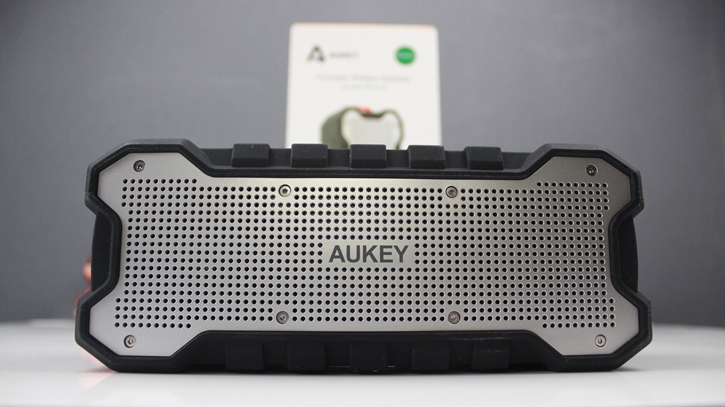 So, if after all that you’re still wondering whether you should grab this device, we wouldn’t blame you. The Aukey SK-M12 unit is currently sitting at £34.99 on Amazon UK, and that’s not a bad price. There are better devices, for the same price point, specifically for bass. It isn’t going to be everyone’s cup of tea in terms of industrial design either.

However if it’s reach and volume you’re looking for, along with some water-resistance and astonishing battery life, the Aukey SK-M12 will do you proud. One other note here is that this device comes with a 24 month warranty. That’s not normally something that’s thought of as added value with devices such as this but 24 months is nothing to sniff at!

Head on over to Amazon UK and check out this or other Aukey products. 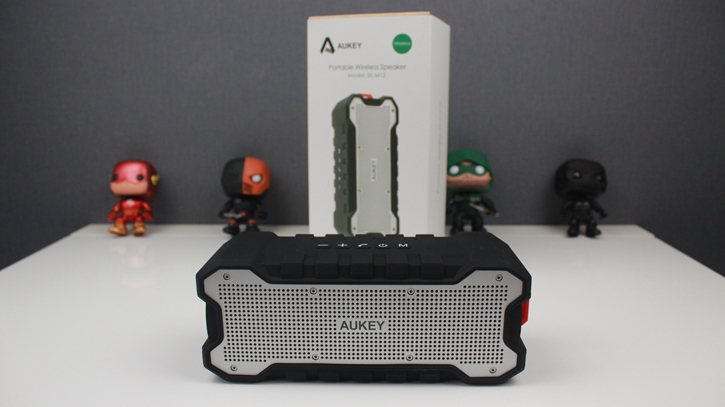