Mechanical Keyboards were once expensive items that only hardcore PCMR fans would purchase due to their multi-hundred pound price tags, but since some rather integral patents ran out a few years ago, we’ve seen somewhat of a race to the bottom in mechanical keyboards (not to mention to infuriating “mechanical feel” keyboards), and unlike everything else where the race to the bottom sucks for the end-user, for around £30, the Aukey KM-G6 is freaking awesome.

Disclaimer: Aukey sent us (Dom) out the KM-G6 to review, it was provided free of charge, but Aukey have no financial investment in the review other than the cost of the hardware, we have not been compensated in any way for this review and no one outside of other MTT editors is reviewing this before it goes live. I (Dom) Have been using the KM-G6 for over a week as my daily keyboard, and these are my thoughts 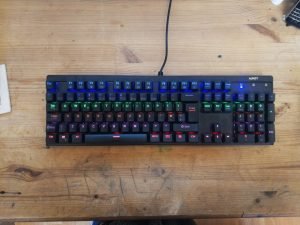 I’m not a stranger to mechanical keyboards, having owned numerous IBM Model M keyboards (i know they’re not the same as current cherry ones, lay off, nerds) and I recently (as in about 9 months ago) bought a low-end mechanical keyboard with reproduction (re: knockoff) Cherry MX Blue mechanical key switches based on Chris’ Review Here. but This is my first time using Outemu switches, specifically Outemu Blues. The Outemu switches follow the same trend in mechanical switches as everyone who is not razer. Blues are tactile and clicky, very clicky. I like blues because they’re obnoxiously loud, and the Outemu’s are very loud, even for blues. These blue switches also require a little more force than the Cherry Blues or the Kail Blue’s I’ve used before it’s not uncomfortable to use, but it is a noticeable difference, even after a week of daily typing I’m still not 100% yet, but my error rate has quickly decreased. 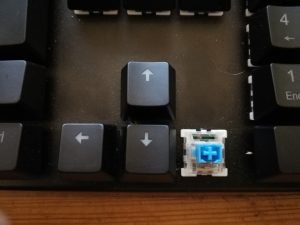 Aside from the switches, what’s the hardware like on the G6? Actually, really solid. Despite being nearly all plastic (I believe there is an aluminium plate in here somewhere) it’s very rigid, and incredibly heavy, at 1.2kg this is not going to move around on your desk, but I wouldn’t want to be the one shipping it.If you press really hard, I can get some flex on the keyboard deck, but in normal use, I never once encountered this flexible deck, because although I bottom out keys, I’m not an ape and savagely beat the keyboard.

The G6 is a full 105 Key keyboard, meaning that it has a number pad over on the side, and honestly, I’m surprised at how much I missed this when I didn’t have it on my previous keyboard. Entering long strings of numbers for whatever reason is much easier on a number pad to the side of the keyboard than reaching your fingers up above the rest of the QWERTY keyboard. If you’re not bothered by a number pad, you can skip this paragraph, but for those of us who love them, it’s present on this, and I won’t buy another keyboard without one again. 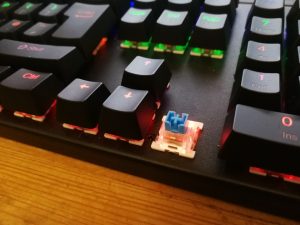 The keycaps are cheap feeling, not nice double-shot PBT or anything like that, as cheap as possible, they keep their shape and they’re smooth enough, but I wouldn’t go singing their praise anywhere. Luckily enough, Outemu switches are compatible with Cherry MX stem keycaps, so as long as you can find a keycap set you like that has Cherry stems (which, they nearly all do) you can change the keycaps to ones that take your fancy.

There are LED lights here on the G6, but they are my least favourite implementation of lighting, and honestly, I would have prefered no lighting over this. The Ideal lighting if full, per key RGB lighting, allowing you to change each and every key to whatever colour you want. The next is solid lighting, for me at least, so every key is the same colour. Whether it be white, Red, Blue or even that awesome Razer Green, a single key that goes all over the keyboard is nice because it’s a sense of uniformity.

The LEDs on the G6 are as follows, each row is a different colour, but every key in the row is the same colour. So for instance, the row starting with Q is Green, A is somewhat of an Orange Colour, Z is a Pinky colour and the Spacebar is a Red colour. This is made even more annoying by the fact that the keycaps, because they’re designed to let the LED shine through and illuminate the letter on each key, the key mask is translucent, so without the lights on it’s actually quite hard to see each key, once again, this is okay with you can find a new set of key caps that have a solid white letter infill, but finding 105 key UK layout keyboard key caps is surprisingly difficult. 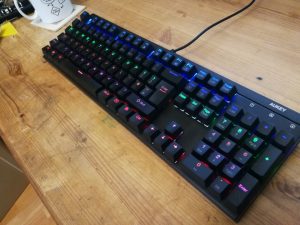 There is also no software to change the effects of the lighting on the G6, it’s all done through key combinations, and to be honest, I spent a week with flashing lights because I couldn’t figure out the key combination to turn it back to a static colour (it was holding the function key and mashing the Insert key, which as a “mode” modifier command). This Is another thing that annoys me about the lighting, is anyone seriously going to use these effects? The ripple when you press a key throughout the keyboard? The WASD only lighting, is there really going to be used? I would have rather just had solid lights with a more advanced dimmer for the entire keyboard. 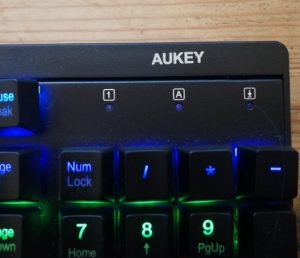 So Conclusion time, would I recommend the KM-G6 from Aukey? Hell yeah, I would. It’s not the cheapest mechanical keyboard on the market, it’s also not the flashiest, but it’s a low-cost keyboard, with really good switches, a number pad and a full UK layout (most cheap mechanical keyboards in the UK just use the US ANSI layout instead of the UK ISO one) so for £30, I’d be hardpressed to find a keyboard I like more for even double the price that the KM-G6 retails for. I Didn’t pay for this keyboard, but I happily would If push came to shove, because the experience is truly, great. 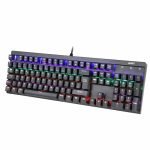