I don’t associate Aukey with gaming products really. Yes, I know they provide mechanical keyboards; I own a few, but I just wouldn’t think of Aukey as a provider of high quality gaming peripherals so when the Aukey GH-S5 gaming headset was sent to us I was eager to find out what a £40 gaming headset sounded like. I wear headphones for a good 20 hours a week during work and play so I’m the ideal candidate to test this out. 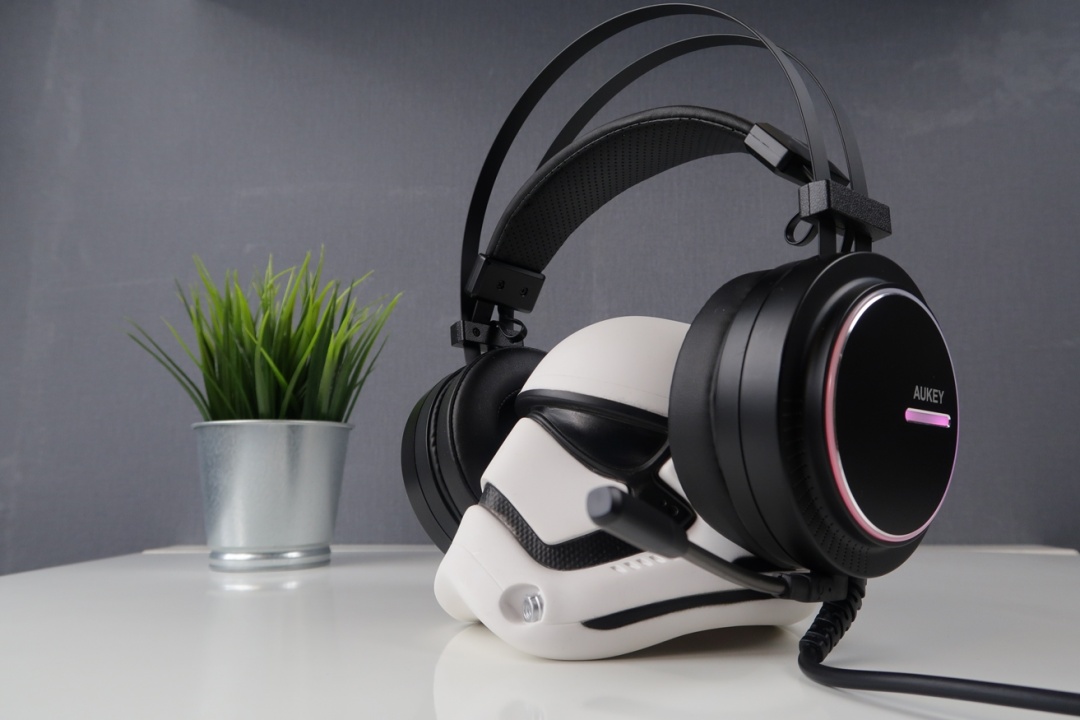 Let’s start right at the beginning with the packaging. Aukey usually do a great job of not over complicating something that is, at its core, there to protect the product in transit. Here though they go overboard. cardboard after cardboard is stuffed into the package and a couple of annoying plastic bags glued around the two metallic head band straps – annoying.

Once I got passed that however, the reminded me very much of the Gamdias Hebe M1 headset I reviewed a while back. The Aukey GH-S5 features similar headband straps and oversized over the ear cups. They also both feature 50mm drivers to ram home that bass.

There is a significant difference in build quality however. The Aukey GH-S5 don’t feel the most premium headset in the world, but they are less than £40 gaming headphones. To be expected and I won’t be too critical at this price point. 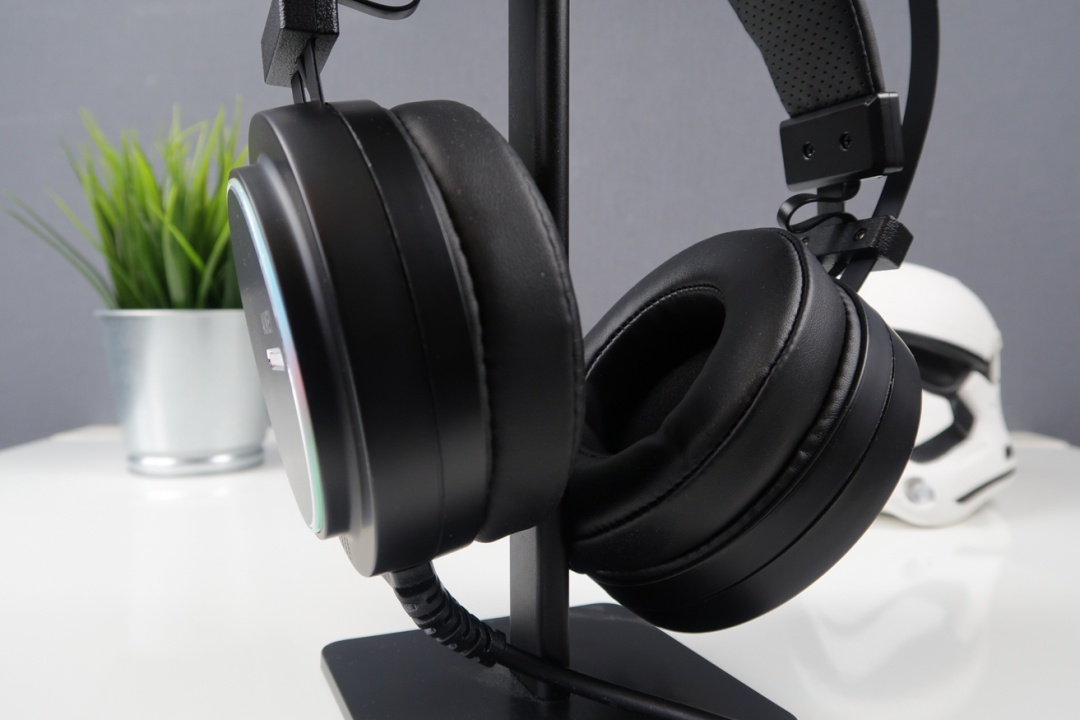 The padding on the main headband is adequate whilst the give in the elastic is a little to lightweight for me. As soon as you put them on you feel that they are meant for bigger heads, and sometimes hang on the ears rather than the head. Your mileage here will vary however. The padding on the ear cups is universally comfortable I believe though. Good job Aukey.

The cable length is also “gaming” grade with over 2 metres of give on the USB cable. This is particularly handy for those with PC’s away from their desk to allow comfortable connectivity. That’s a good point. A slightly sour point however is the control pod from which audio and RGB is controlled. It is huge; too big. It’s about 3″ in length and just weighs down the left hand ear cup and again makes the headset a little uncomfortable unless you can find a place to put the control pod to take the weight off the cup. In my testing, that was difficult due to the close proximity of the control pod to the left ear cup. Had they only a) made it smaller, b) included a clothes clip, or even c) moved it further down the USB cable, this could have been dealt with more easily. 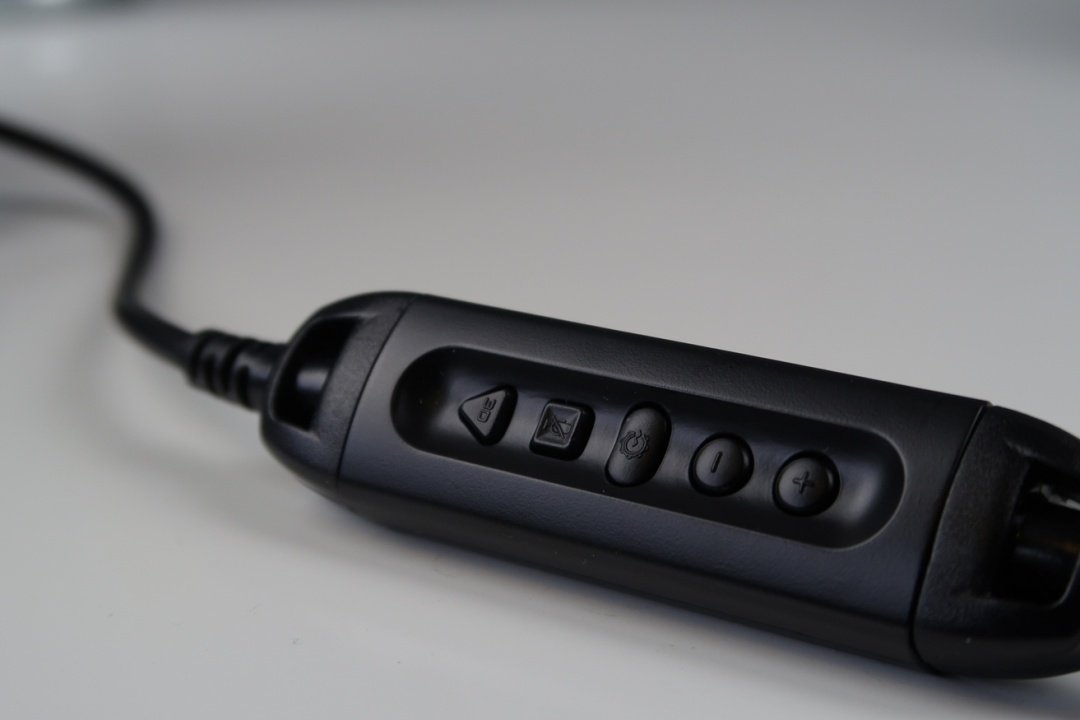 All the controls are there though. Volume up and down, RGB control with a number of options from static RGB colour schemes, to breathing to flashing, as well as an inline mute button and a “simulated” 3D sound effect button. Starting with the latter, it doesn’t do much. It simulates a slight spatial effect but that’s difficult to pinpoint in many scenarios (gaming or listening to media). Just leave it off.

There is an additional software application you can download to tweak some of the controls directly such as microphone settings, an EQ (which I think is a must) as well as the 7.1 surround sound settings. Head on over to the Aukey Downloads section and grab their Scepter suite.

The microphone, whilst having a lot of warmth to it also has an annoying effect on my voice; it seemingly deepens it making me sound a little slower too. Now, I am slow (watch it!) but this emphasises it! Your party won’t have any issues hearing you thought as the omni-directional microphone picked up my voice wherever I moved it to. Unfortunately the microphone is not detachable (I certainly didn’t brute force it….honest) as it can sometimes get in the way of the USB cable terminating just beneath it. 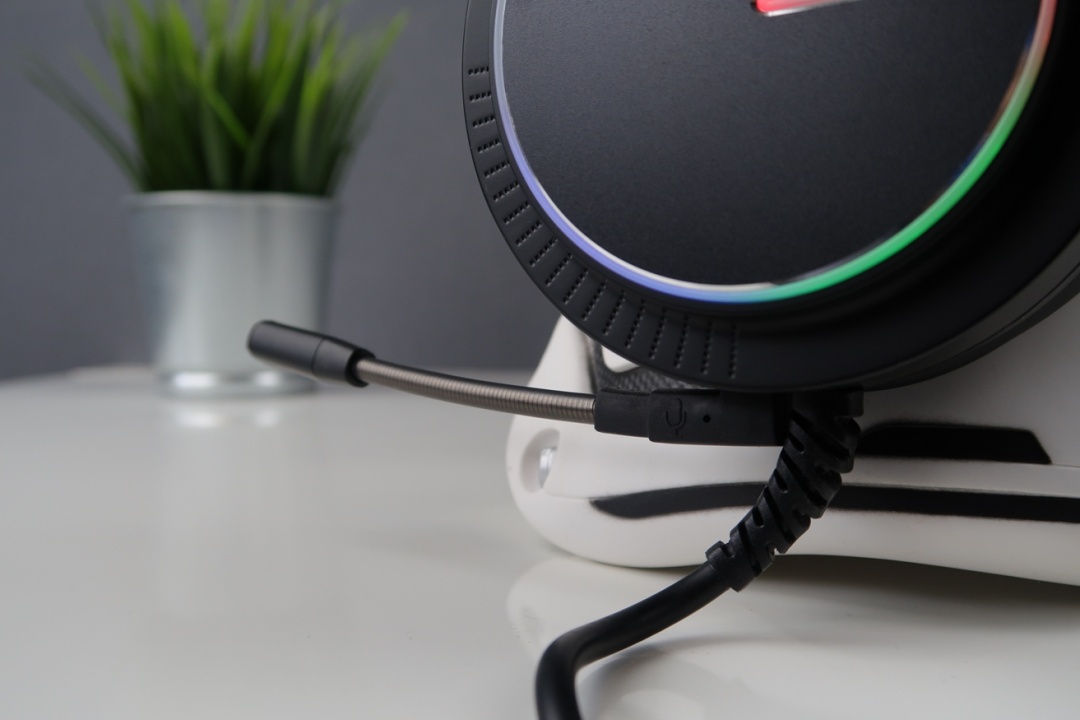 Audio wise, this headset does shine. It’s relatively clear at highs through to lows and it does indeed have a Razer-esque bass signature (whilst not quite as mature as their offerings). Whilst I’m absolutely not a fan of bass-heavy headsets, on a gaming headset it’s a little more forgivable. The sound-stage can be tweaked in the software but I doubt many will feel the need. It’s not overbearing.

It’s amazing to me to get the level of audio I do on these for just £40, when I recall spending double that on Steel Series headphones years ago. The Siberia cans I used to use probably have a similar sound-stage as these which just shows how things have progressed.

Having praised the audio on the Aukey GH-S5, and if you’re on a budget, giving it a recommendation, I do feel they could have cut less corners. Deliver a detachable microphone, smaller control pod, stronger elastic, etc. Maybe I’m spoiled by the higher end gaming headsets, but £40 whilst still budget in the gaming world, is still a wedge of cash to drop on something you’re going to be wearing on your head a while. I don’t think the improvements on the areas I was unhappy with would have cost much (if any) more in terms of the bill of materials, so maybe we’ll see a next-gen version with this addressed.

On a budget? Give them a go. After something a little more ‘prosumer’ – look elsewhere. That’s about the size of it. 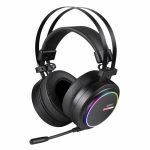