Aukey are known for delivering power banks as well as other mobile peripherals. This is their largest. And it is very large! The Aukey 30000mAh Power Bank has a Quick Charge 3.0 port, another up to 2.4amp port, as well as the ability to be charged either via microUSB or Lightning cable. Interesting no? Read on for our view.

Okay, so let’s get the obligatory Star Wars reference out-of-the-way despite the reference being doubly efficient due to Aukey’s Lightning port (get it?). Obviously the Aukey 30000mAh Power Bank doesn’t deliver unlimited power. 30000mAh is still a hell of a lot of power for one unit to hold.

The Aukey 3000mAh Power Bank is a brick. There’s no nice way of saying that. It’s a big ol’ brick. On one of the edges sits all the fun stuff; a Qualcomm Quick Charge 3.0 port, an AiPower charging port which intelligently senses the best charging rate for the connected device, up to 2.4A, a microUSB port for charging the unit as well as a Lightning charging port also. There’s also an LED flashlight for that 1%. On the top of the unit there’s a power button-come-charge level notification. Red illumination suggests 0%-30% remaining charge, with green indicating 30%-70% and white accounting for the uppermost charge.

Speed of charging is one thing, but what about amount of cycles? If you’re a traveller, you’re probably less likely to worry about the speed of a charge. Instead you might want to know that the device can keep your phone/tablet charged multiple times over, across an entire trip. We managed to recharge our OnePlus 3 device, from dead, nearly 9 times before the battery gave out in the Aukey unit. That suggests around about 85%-87% efficiency of this device which is very good at this size. Of course, the beauty of this sort of unit is that you can charge multiple devices at a time. We tested a OnePlus 3 (not QC 3.0 – Dash instead) at the same time as charging an iPad from flat and managed to pull a respectable combined 3.4A.

To give you some idea of the longevity of this device, we managed to charge:

After charging all of this, the Aukey 3000mAh power bank was notifying us via it’s red LED that it had less than 30% power. We’d expect so, but look at that list! Not all of these devices were charged one after the other either, this was spread over a 2 week period in which the unit wasn’t charged in between. The longevity of the device is helped also by its automatic sleep timer of 15 seconds without a charge request. Excellent and something we now come to expect from all units.

After all is said and done, we can’t recommend this unit highly enough. It’s durable if not pretty, functional if not feature packed, and it’s just packing some serious bloody power! If we had any gripes it would be the lack of a USB Type-C in or out, although it does have lightning which manages to charge the unit, from a QC 3.0 charger, in just 4 hours. Finally, there’s the price. This is currently sitting on Amazon UK for £35.99 at the time of writing. That’s phenomenal value! After hunting on Amazon for 15 minutes we managed to find a bunch of cheap (like £8 cheap) power banks claiming “30000mAh” with 1 star reviews, and only one unit priced slightly cheaper (at £32) by an unknown brand with no reviews.

Aukey have a winner here. We wouldn’t be surprised if this is what kept Palpatine’s Force Lightning going all those years! 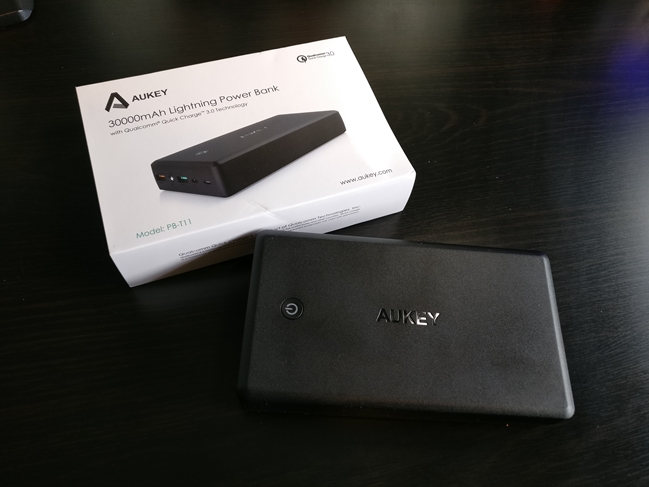