Bluetooth headphones are a saturated market with Amazon simply teeming with options within the £20 to £50 price point. We’re looking at the August EP650 offering here in our full review.

The August EP650 Bluetooth headphones are just one in many options from retailers such as Amazon. These particular headphones are available in a range of colours such as Black, Blue, Silver, White, Gold and Red. We’ve got the Black ones here.

In the box you’ll receive the August EP650 headphones themselves, along with a user manual, a 3.5mm to 3.5mm audio cable for conventional wired use, and a Micro USB cable to charge the headphones.

The device itself has a grippy black matte finish which covers the entire plastic outer casing of the unit. Fingerprints are an issue here but nowhere close to what they would have been in the event of a glossy finish. The headphones are easily adjusted both up and down either side, feeling solid thanks to the internal metallic construction. Each ear cup and the headband is supported by 12mm of padding in a faux-leather for comfort whilst listening to the 6mm drivers in the August EP650 unit. As well as the head band being adjustable, the cups themselves are articulated to allow some movement to fit most ear types/sizes easily, however they do not fully rotate. 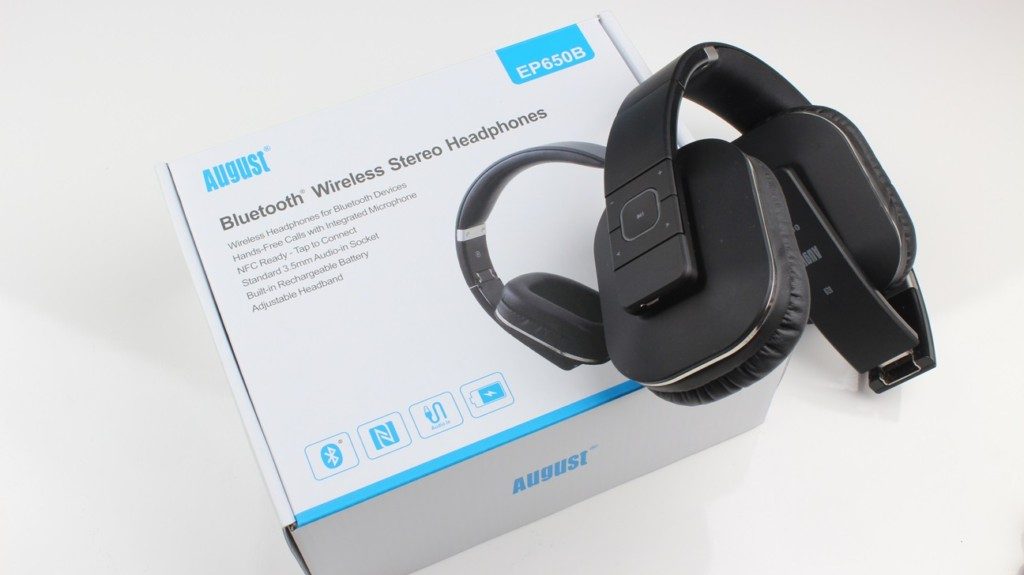 Looking around the device we’ve got some branding on the left ear cup, as well as the NFC pairing tag built into the arm. On the right hand side are the controls with a four point rectangular pad, with an smaller main button on the inside. The top two buttons control the volume, whilst the bottom two control the track skip/repeat functions. The middle button acts as an On/Off button as well as a Play/Pause button. Around the Play/Pause button is a status LED which lights up when turning on, off, and during pairing.

Let’s start by just how easy it is to set up and use the August EP650 headphones to begin with. The answer is very. All Bluetooth headphones are easy to setup; simply turn them on and search for them with your smartphone (or other device). These make it even easier with the inclusion of an NFC pairing area. the NFC tag embedded within the right support arm has all the information that devices need to connect to the unit (presumably a MAC address is involved) instantly. Simply tap your NFC-enabled device to the headphones and the pairing is completed. You’ll get some notification tones via the speakers to let you know also.

If users don’t want to connect via Bluetooth, there are other options. The included 3.5mm audio cable can be connected to the right arm just behind the ear cup, and then used with any device with a 3.5mm audio in. This is great for when the battery gets low too. Furthermore, there is an included USB cable, not just for charging, but to use with a laptop or PC. Connect the device whilst it’s turned off to a PC/MAC and the device will be found and act as a USB headset. Simultaneously, the device will be charging too – perfect no?

The battery itself lived up to expectations in our testing. The 220mAh battery lasted for just over 9 hours of playback over the course of a week’s testing, on one charge which is more than good enough for most people. Given that the battery is so small, and there are other non-Bluetooth methods of connection, users will hardly ever be caught without the ability to use these devices. When a charge is required, it won’t take more than about 90mins in our testing using a standard wall adapter and the included USB cable.

All About That Bass, No Treble 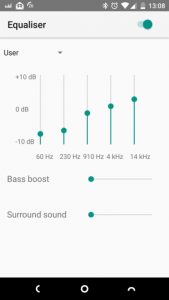 Upon first listening one thing is abundantly clear. The August EP650 headphones are meant for people who enjoy bass. Listening to Hip-Hop, RnB, Pop, or practically any modern music produces a very heavy bassy undertone. It’s not in “Beats” territory but it permeates enough for this to be an issue for those who want an opposite audio experience. In Ed Sheeran’s “Give Me Love”, the guitar is muffled, and the Violin which should provide a haunting/soothing tone (depending on your emotional state at the time!) is drowned out by the ambient bass. The Piano in the hit “Eyes Wide Shut” by Years & Years is equally muddy. An equaliser can deal with this relatively easily (such as the one in Deezer) but out of the box it’s definitely a basshead’s friend.

The interesting thing here is that bass has some depth and clarity to it also. Yes it is overpowering most of the time, but in Dance songs there is a really differentiation in the rolling bass of a “drop”. Sweet Female Attitude’s timeliness UK Garage hit “Flowers” showcases this perfectly.

The mids and highs on this device aren’t much to write home about without using an EQ to set them as such. With the relevant EQ settings it showcases that the headphones are capable of hitting some ‘okay’ mids in the absence of bass, whilst highs remain misty. Not to be unexpected as it’s a £30 headphone, and what it does do well, it does quite well for that price point.

Media consumption (YouTube, Video streaming, etc) with the August EP650 headphones are only a slightly different prospect to that which has already been described. Bass is again by far and away at the fore, however the mids seem to come into play a little more (various applications and devices have proven that to be the case). Not a lot, but certainly more than in audio only listening. The clarity in the bass is more easily felt also with rumbling scores in action scenes really highlighting the depth.

Using this device for a period of time isn’t going to provide any significant comfort issues. The amble padding helps to provide enough cushioning when using this long-term, albeit the material isn’t necessarily great at dissipating heat and your ears could well sweat somewhat in longer listening sessions. In addition to the padding, the near 10 degree pivot that the support arms offer the ear cups means that the head band can be moved on the head without the ear cups situation changing. Not only is this very important as everybody’s heads are a different shape, but it allows for some movement without disrupting the sound. Taking that a bit further the entire unit folds at the arms’ midpoint to ensure a very portable unit. There is a very defined snap when opening/closing the unit which locks in either case top ensure that there isn’t any flapping of the arms when carrying. 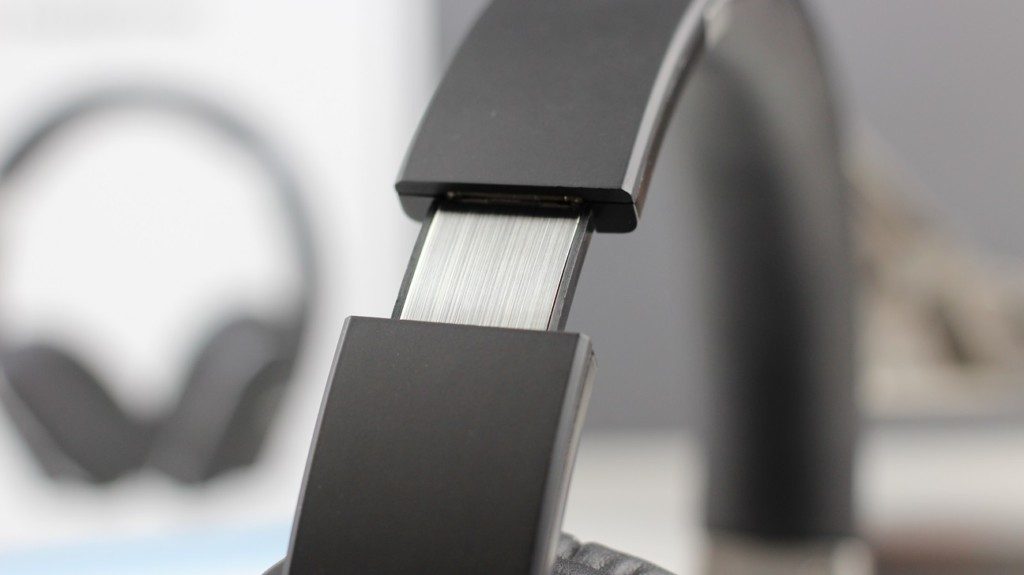 Controlling the August EP650 is very easy even without being in arms’ reach of the device you’re streaming from. The built-in control unit, something the manual calls a remote control, is placed well on the right ear cup. The volume up and down buttons at the top of the control unit and the forward/repeat buttons aren’t easily found. Usually finding the middle button, and working your fingers out from that point is the only sure-fire way of ensuring that the correct buttons are found. We would have liked to have seen some dimples, or textured finish different across the control panel to make these buttons easy to find. After all, it’s not like consumers will be looking at this when control panel regularly. The Play/Pause button is, as mentioned, easy to find however as it’s slightly concave. 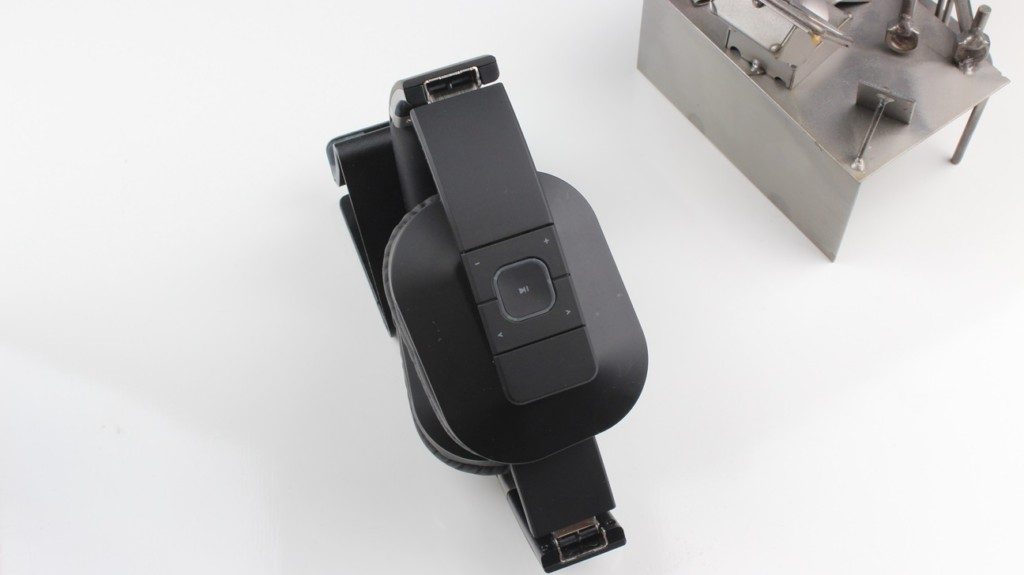 The unit isn’t without its foibles either. When using that Play/Pause button to stop the audio, there is a noticeable hiss, and click before silence about 2 seconds later. This isn’t a deal breaker but those with more tuned hearing will no doubt pick-up the inherent hiss through the low points of some songs too. We’ve also encountered a very infrequent, but evident channel switch when listening via Bluetooth. This doesn’t seem to occur when using the wired solutions. Essentially it manifests as a slight dip to mono sound for the briefest of seconds before resuming as normal. It doesn’t really detract from the enjoying or listening experience, but it’s worth noting. This could be the units we have tested with, so your mileage might vary and it may not present itself. It’s certainly a sporadic incident.

Finally passive noise cancellation and isolation on this device is relatively good. The around-the-ear style of the ear cups mean that a lot of ambient sound is left sounding little more than white noise. Sitting at a desk listening to these headphones, whilst typing on a particularly noisy keyboard, the audio and isolation easily drown out the sound. A usual test of clicking fingers to the music is also easily drowned out even at low volume, and only just heard. These aren’t the best out there for isolation and immersion, but they do a very good job for £30. They also keep the outside world from hearing what you are listening to also – something more people could certainly (be forced to) take advantage of.

The August EP650 headphones are a bit of a bargain at £30. Not only do you get solid battery life, and a nice aesthetic but the audio is on a par with other Bluetooth headsets that seem to emphasise bass levels over any other frequency. Whilst that doesn’t sound like a ringing endorsement, there is more to these headphones than just the audio clarity.

It sounds a bit strange to say that but the versatility of this device; to pair via NFC, connect via 3.5mm jack as well as USB, and also fold up into a nice neat package for portability, also needs to be taken into consideration when making a purchase decision.

Purists will scoff at the ability of this device to accurately represent more subtle elements and frequencies, and they’;d be right to. This device isn’t for them. It’s for the frequent traveller, or commuter, and in that bracket they certainly appear a great option. 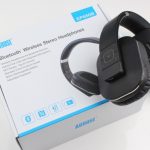