It would seem right now that Bluetooth earphones/headphones are on a roll right now. Having just looked at the two offerings from Brainwavz, company that has been around the audio world for a good few years now, we have a new entrant. Axgio, and not to worry as I’d never heard of them either until they asked me to review the Sprint’s. With that name they must be thinking running / gym right? so does that mean they sound mediocre? lets press on and see shall we?

Fairly simple box, don’t show off their inner shiny bit though which I don’t get why. Anyway nothing especially interesting here. Inside we get the buds, the charging cable and two baggies of tips. Ooh one is some silicones’ and the other a bunch of foamies. Yey for foam tips. The buds have some gunmetal polished inner which I rather like. Black plain on the outer which seems weird but whatever. Wait, where’s the case??? No case, really? To eBay then we go.

So after a plugging in to charge them a bit I pair them to the iPhone 5 that’s sat on my desk. (I do like iOS’s default displaying the Bluetooth devices battery level.) Firing up Google music, oh! It’s completely foundation less as I’ve not heard anything else today but these sound good. Really good for some US$40 bluetooth earphone. It got to be packing in DAC, amp battery and Bluetooth bits into a small package so I expected them to sound, so so. First thoughts are these spank the BLU-100’s with some ease. Damn, I thought these would be a bit meh and so a super quick thing to review. Darn.

Not that it should matter but predominantly an iPhone 5, Moto G 4G 1st gen and a Lumia 735. Note the Lumia supports aptX.

Unsurprisingly they have a somewhat elevated bass response. It’s not the most linear either, it trails off fairly rapidly and it’s got a fair bit of that mid/bass hump. Honestly though I really don’t mind too much. It’s a cheap product so we know were weren’t going to be getting an ER4 challenger here. It fun, it’s rhythmic and it’s playful. It’s not trying to be some paragon of neutrality and it just runs with it. It’s goodly rounded with a tiny slant towards punchiness. There is a bit of bloom and softness to the impacts which I’m not sure if intentional or not. Either way it pairs up well with the elevated scale to be big and hearty yet not overbearing. Actually it’s really a fun and lively little bugger. Dark enough when it’s asked to be dark and soft enough when it’s asked to be rich and mellow. I find myself really rather liking slow and sweeping tracks, such an John Steven’s rendition of “This Love” the lows being genteel, woody with a full-bodied roundness. They are really pleasant on the ear. Flicking to Miss GaGa’s “Teeth” the bass kick it up a notch and does its best to be mean and aggressive as the track demands. Is it quite brutal enough? Na it’s a bit cheerfully mellow to be convincingly brutal. Still these are supposed to be a cheap little gym / run IEM. It’s really quite credible audio wise.

Again I thought it should be meh yet I find myself genuinely enjoying it. It’s clearly not a top-tier master but for some cheap Bluetooth thing you could really actually live with it!!! Des’ree’s “Darwin Star” while she has to battle to sing through the wall of low-end noise, she vocally belts it out. Slicing right through like some grand master samurai sword and yet retains that faint and delicate quiver. I think I like this more than I ought to. Male vocals aren’t quite as well rendered as they start to bleed into the mid/bass humpy zone but the girlies are great. The detail level and nuances are to a degree captured and not just what you need for crappy, gym motivational beat line music.

You know maybe these are too nice, too creamy for really being gym IEM’s. These aren’t giving me that cold, hard, grrrrr aggressiveness. They are a big old German Shepard playing with a squeaky toy. They aren’t the fearsome police barking and snarling at you to make you shift that backside of yours.

Pretty restrained. There is a little flourish of treble shimmer of the top but it’s never near centre stage. For my tastes, bang on. You can’t get treble perfect at a low price so better not to try to shred people’s ears. Given that it’s Bluetooth and it’s very, very likely to only ever play back compressed music dialling down the treble is wise. It’s well, it is there but it really rolls of with some speed and what is there isn’t energy filled. Again that’s works for me but treble heads will not be pleased.

The quantity is also fairly slight. It’s fairly clear but never hard or edgy, it never has that cutting edge to it. It’s all shimmer and the more you throw at it and the more there is the more it becomes a general shimmer rather than anything particularly distinct.

While it is quite good in terms of simple scale and body, there isn’t what I’d call any real distance. You’re in a moderate sized room with a big hearty speaker set up. Placement is, well it’s a bit so so. You can generally get a vague impression of location from the mids in the front and the bass and highs off behind. Placements is best when there isn’t much going on. Separation, hmm it’s not super. Vocals pull away from the rest but highs and lows are pretty much all rolled together.

I was rather pleased with their fit. They were a bit big bud wise but the curvature to their body was excellent. I heartily suggest that other makers have a look and try to get some design tips. They are big yet they fit me perfectly. I wasn’t so keen on the memory wire but it fairness I’ve never encountered a memory wire and thought “ooooh that was so handy I’m glad that was there.”

Ever so closely tied to fit and generally if ones good the other is too. Fit was great and so the comfort was too. Big wireless buds that essentially weighed nothing and I could wear for hours at a time.

The outer black of them is just like everything else out there but the inner section being some glossy gunmetal type colour, I really actually liked that. I’d be happy if the whole thing was the same. Glossy but not a bright glossy, in your face blingy. Otherwise they are black. Nothing that really demands mention, they look fine.

Sadly there was some. The wire connecting the two side was a just a bit long for me and it regularly hit my collars if I turned my head about. It didn’t matter I wore them under my chin or at the back of my neck. I almost always wear polo necks so I have colours and it did irritate me a bit. It wasn’t like it was a huge problem but it did exist as an issue.

For a big old dynamic really good actually. I’d expected them to be more vented but they stood up with the better end of dynamics. It’s the fine for on a bus, in a gym, out for a run but you know, not really for a flight or Tube commute. If you do run with them, for the love of god do look where you’re going because you won’t hear people around you or that bus that’s right behind. Eyes people!

Well it does have a cable, a very short cable just linking the ear pieces but it’s a fairly noisy thing. Looks fine in terms of durability but what really got on my nerves, whoever it was that arranged the buttons on the controller / mic thingy. Everyone uses the layout volume up / play pause skip / volume down. Oh but no, the play pause skip on off pairing super button is at the end rather than in the middle. Why? I know it’s not the end of the world but expect to regularly hit the wrong button until you get used to it.

Build Quality: They seem rather nice. There is something rather plastic looking about the black plastic back of the buds. I don’t know what it is but they just don’t look like something anyone’s going to mug you over. It all feels sturdy but there’s just something I can’t put my finger on.

You get a selection of tips including foam ones, yey! You also get a micro USB cable. While it’s nice to give the cable you need to charge them, I suppose they have to don’t they? Just I don’t know about you but I’ve got at least 3 million Micro USB cables already and a little case therefore would have been more welcome. Of course if you want a little case there as ever eBay.

Cracking. I mean you can’t not compare these to the BLU-100. These are cheaper and they are better. Annoying cable aside these are fab for cheap Bluetooth earbuds.

I must confess I’d never even heard of Axgio when they contacted me to review these. I didn’t expect much from them, you know a new entrant to the audio world. Things are usually a nice try, good effort but they just doesn’t quite get everything right on their first time out. Well these really nail it. They are of course a Bluetooth, wireless, so built in DAC and amp and battery so I really can’t quite put them head to head with what US$40 gets you with a wire from the best value brands. Still I’m way impressed at their first outing. I mean these come in a hair cheaper than the BLU-100 and they are better, hands down. (Sorry Brainwavz, I love you guys but Axgio have bested you for now.)

The rate at which electronics and drivers are getting better / getting cheaper, is scary. The Sprint is clear evidence of this. Though it’s annoying because it pushes the quality of IEM’s ever closer together and makes it harder to put some distance between products. Still these are little belters for the price. Maybe a little rich and creamy for gym motivation but for just listening they are excellent.

So, buy one? Yes. I don’t love the cable, tie or no and I’m not wild over the button arrangement. However that’s pretty much it for downs. Its audio quality is great, its base is rhythmic and lively with a rich warmth still. Mids are flowing and oozing with great clarity for the money. The highs are shimmery and pleasing. What’s not to love, at this price and wireless to boot!!! 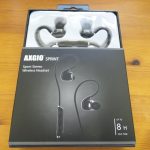