If you noticed our bargain alert posted at the start of the month, you’ll already know there was an app deal posted about Monopoly being just 10p. A nice saving of £1.39. Well I decided to purchase myself a copy despite the 3.8 score on the Play Store. At 10p what did I have to lose. Let’s have a look at my review of Monopoly for Android.

So if you haven’t heard of Monopoly it is traditionally and board game that simulates an economy. If you do well it can result in you becoming rich but on the flip side if you don’t do well you can become bankrupt. Pretty detailed for a board game. There are loads of different versions, but they all have to same objectives.

When I purchased the app I wasn’t expecting much, but boy was a surprised. I tested this on the HTC One M8 and the only problem I seemed to encounter was that after pressing “Play” there was quite a long delay to get to the point where the board actually loads in (as displayed on the second screenshot). 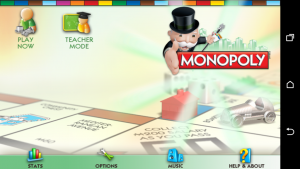 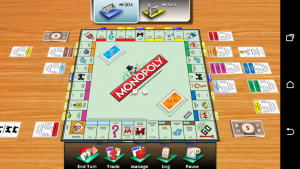 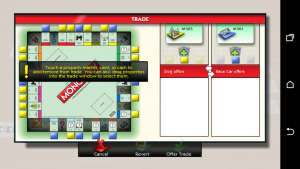 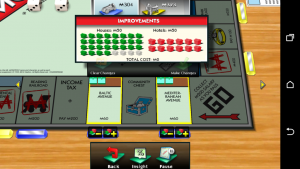 But besides that there were no other problems. The game ran smoothly with no issues what so ever. The animations are buttery smooth. So despite what I read on the Play Store, I would recommend it to others but I would say to run it on a tablet.

The only reason I say this is because if you were playing other people you would want to place the device on a table and the bigger the screen the easier it would be for other people to see the screen. Unfortunately you can’t play across two or more devices, which is another reason I suggest using a tablet over a phone. Though if they were to allow to play of your local area network it would definitely be worth the £1.49. Besides no multi device support there is no Google Play Services integration. This means there are no achievements and users will be unable to start a game on one device and continue it on another.

So to conclude, the game runs perfectly with no lag but if there was more than one physical person playing the game I would recommend using a tablet as it means that everyone can sit round a table and still play in a traditional style. The way it was supposed to be played.