PieMessage, an application bringing iMessage closer to a reality on Android

You’re all aware of iMessage, right? It’s a service created by Apple back in 2011 along with iOS 5, letting iOS users connect with each other in the same way WhatsApp users communicate. Instead of using the standard SMS/MMS protocol, it allows you to send texts, documents, photos, video and everything in-between over WiFi or mobile phone internet signals so it doesn’t diminish your limited text messages if you are on a contract that provides such a thing.

The best thing about iMessage, of course, is the fact that you can interact with iOS users all over the globe and it’s not just limited to Apple’s iPhone; you can send texts or media from your iPad and even your MacBook.

The only caveat to iMessage is the fact that you are unable to communicate with users of other platforms such as Android and Windows Phone, meaning the service is exclusive to anybody embedded into Apple’s ecosystem. If you were to send a message from an iPhone to somebody that is using an Android device, for example, it will revert back to the standard SMS protocol and register it as a text message rather than an iMessage.

The Rise of iMessage

To date, iMessage is Apple’s most successful service. In 2012, the CEO of Apple, Tim Cook, provided us with an insight into just how many iMessages were being sent a year after its release, along with an average amount of messages Apple have delivered per second. These figures can be found below. 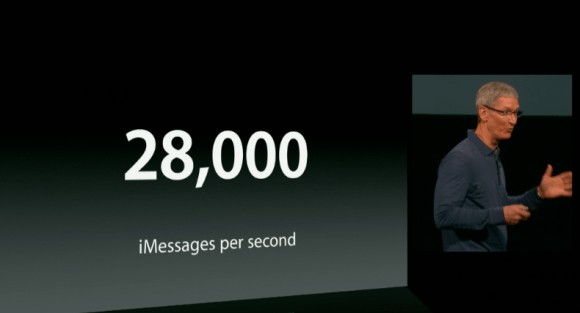 The figures don’t lie when it comes to messaging services, and 300 billion messages sent using the iMessage service during its first yearly release when it has no cross-platform compatibility is a figure only Apple could manage.

In February 2016, Eddie Cue mentioned in an Apple Conference that the number of iMessages sent per second has grown to just over 200,000.

If you are at all familiar with how social media works and how things run its course of hype, PieMessage is an application all-too-familiar with you by now. It’s an application created by a developer named Eric Chee, or bboyairwreck if you want to go by the alias. This application is an open source affair and is currently available on GitHub for everyone to see. Eric explains this application as a “super-alpha prototype”, and is more of a proof of concept for the time being. There’re a few pre-requisites before you can actually use the iMessage service on Android using PieMessage, and there’s equal as many caveats to go with it.

You need a Mac

In order for this application to get off the ground running, you require a Mac running OS X with a Static IP address to be used as a ‘middleman’ between the two operating systems and how it sends the message. As I stated above, the way Android and iOS interact via text or media is through the standard SMS/MMS protocol, so you need a third-party server running on OS X to intercept these messages and convert them to seem as if this is sent from, or even to the iMessage service. Another thing to point out, if not obvious by now, is the fact that this ‘middleman’ Mac server needs to be running if you want to send an iMessage from an Android device.

It requires a third-party messaging application

Another thing that is imperative in order for the application to work 100% correctly is that you will need to use the third-party Android messaging application that Eric Chee kindly provides. I’m unsure of the specifics, but I’m lead to believe that this messaging application is hooked up to the server that you set up earlier on your Mac so it allows them to be seen as an iMessage.

This isn’t a ‘plug-and-play’ experience

As you can probably tell by now, this service is more of a proof of concept and isn’t ready for mainstream audiences quite yet. If you want to try it, there’s quite a lot of setting up involved that the average consumer won’t have the knowledge to do. It requires the use of IntelliJ along with Android Studio to build the .apk file for the Android application to run, as well as setting up a Java server on your Mac for it to work as intended. If you would like to test this out for yourself, Eric kindly provides a step-by-step guide on how to set up the application for use and what’s next for PieMessage.

Group Messaging is a work-in-progress

Currently you are only able to send messages to single recipients using an iOS device with the iMessage service. If you were hoping for full group chat support, unfortunately as it stands all you can do is view messages that are being sent to you from group chats using iMessage. Sending to group chats is currently in the works for a future release.

Huge step for a mainstream reality

Making iMessage a reality for Android users has been a fever dream for many people including me for a long time. The fact that a developer as courageous as Eric is has moved a major step towards this happening as seamlessly as possible is a great feat. I can’t wait to see what’s next.

Have you tried PieMessage out yet? What are your thoughts so far? Let us know in the comments.