With both the relaunch of Tidal and the launch of Apple music, both I’ve reviewed previously, other streaming services that have been around for longer but aren’t quite so high-profile, how do they stack up? This time I have a look and listen to Deezer, yeah I don’t get the name either, but its been around for yonks. So they have had plenty of time to polish their service despite not having such a big name. So, how does Deezer fair and compare? read on and find out.

Okay, confession time, Deezer I have used sporadically for some time. Up until now it’s only ever been the free version but after having recently reviewed Tidal, I wanted to give some others services a bash, see what I make of them. I had been in contact with Deezer’s PR people but given the pace at which their PR people have been moving. When I was emailed about their 99p 3 month trial, I thought the price / pain balance I was just as well to cough up the 99p.

The Deezer streaming page popping up and as I scroll down it, I’m wondering if Deezer has at some point got into my music library. Much of what it’s throwing up at isn’t maybe stuff I listen to everyday but its stuff that’s making me go “oooooh not heard that in forever!!!!”. Maybe it’s just throwing up stuff that statistically lots of people would react that way to. Either way, it’s a cracking initial impression. If you want to try it yourself they offer a free service, unlike Tidal, where you can fire it up and see to an extent what it’s like.

It covers just about everything. They have a browser-based offering for computers, it seems equally happy with any browser you want to try as well. Mobile wise it supports Android, iOS and Windows Phone too. So that covers the bases right? Well the list goes on and I should point out I’m going to be skimming. Chromecast, a bunch of TV’s, Sony Home theatre in a box’s, WDTV’s (which I have one,) a heap of music streaming devices, especially Sonos, which I’ll come back to in a sec, then weirdly a bunch of cars. Yes, the things with 4 wheels, apparently some of their entertainment systems can use Deezer. Now back to Sonos, for some reason Deezer have a special lossless “Elite” service but it is only available via Sonos. I have no idea why, I mean how hard would it be to add to the browser or phone app’s? However if you have a Sonos system and you want to pay more you can get the “Elite” lossless version.

Well, there isn’t a real windows desktop app, yet. They say one is coming but what isn’t. Interestingly there is a windows Metro app if you want to play with it. For some reason it offered me Ibiza 2015, err no thank you. Given Microsoft seem to be letting Metro die I suspect Deezer haven’t lavished much love on it.

It is a nicely straight forward offering. It’s good. I feel I ought to have much more to say about it but well, I dunno. There isn’t anything that’s made me go wow that’s so super amazing, neither has anything pissed me off. It’s good it’s functional, it’s nice to use. It’s very simply laid out but it’s all rather straight forward and usable. While that really ought to be high praise as there is nothing it does wrong, it does not make for giving me much to write about.

The app seems really quite nice. It seems mostly to want you to use a Pandora like “we will play you random stuff and you thumbs down or thumbs up it.” You can also play things by artist, album, things you’ve favorited, related artists. Ooh actually I always like related artists. It’s a good music discovery method. It really is very like the browser version. It’s nice. It’s clean and obvious to use and it’s so far done nothing that has pissed me off. Everything just works, I don’t like that phrase but it applies.

First off, what I notice is that it’s almost identical to the Android one. The settings menu is in a different location but that’s about it. Just like the Android app its snappy, it’s efficient, it’s straightforward and everything works. Sure you have to go in and change the quality settings to high, but seeing as the free only has standard I suppose it makes sense. Maybe it might be nice if it specifically asked the user? Anyway like with Android, it’s a rather nice, smooth, snappy app that does just what you want it to.

First of all, it’s nice to see there is a WP app. Secondly. It’s every bit as good as the other two. WP sometimes gets forgotten about and left behind but the app here is (WP visual style changes aside) identical to the other two. I can help but approve. Everything else inside the app is just identical, not just similar but exactly the same which means is every bit as good. It’s clear whoever is running Deezer’s app development dept. is great at their job.

Well, while there are a seemingly endless number of streaming devices that Deezer runs on I have is a WDTV and a Chromecast. Firing up the WDTV, it’s a great little thing, so versatile and powerful but its UI is rubbish. It’s a slow, horrible pain. So firing up the Deezer app on it, it’s just like any WDTV app. Its layout is fine but it’s not snappy for which I blame the WDTV. Still audio, it plays nicely, easily, easy to control and it pulls in my songs and lists from Deezer. Swapping onto the Chromecast, grabbing a phone and firing up the Deezer app. I see in the corner the Chromecast icon, I hit it. The thing spurs into life and out comes music. Curiously what was on the screen of the phone bore no correlation to what the Chromecast was playing. A stop and a restart brought them back into sync but it was weird. Not that I am some great thrower of soirees but I’m thinking an old phone and Chromecast, boom! Perfect party tunes box. Well assuming you have real speakers, not just TV speakers. Bugger me, Deezer is really nailing the random songs its throwing at me. I think I may have just found a reason for owning the Chromecast.

Well it seems excellent. They claim to have 35 million. Though note that’s not all music, weirdly, or it seems weird to me, they have audio books too. Yeah, book books, real books. Do the other services do this? If they do they don’t make it known very well. Also the children’s music section. Genius!!!! The collection seems to be excellent, spookily so. They even have Mark Timothy, which I was surprised at. Curiously they didn’t have any Moumoon, so maybe just not big in Japan? That so far has been the only thing ive stumped it with. Maybe it’s that the people at Deezer’s tastes in music happens to pair up especially well with mine? At this point I’m either thinking that Deezer has some secret chip picking my brain or that its run by Skynet.

From what they have thrown my way, there seems to be a lot of late 80 and throughout the 90s stuff. Seriously it has plucked out songs I couldn’t have named, haven’t heard in forever and casually presented them to me. I’m curious whether it would throw similar stuff to everyone or if it’s just me. It feels like its drunken party karaoke night. Presently Bananarama’s Venus is blasting out. Oh ye olde timey hits from yesteryear. The grown up audio snob in is mildly disapproving that I’m enjoying this as much as I am and at how much I’m singing and dancing in my chair. “Lessons in Love” by Level 42. Songs I couldn’t name that instantly ring bells in my head when I hear them. Argh!!! Kim Wilde, “Kids in America” I feel like ought to a have a Bacardi Breezer or blue WKD in my hand.

Firing up one its “Genre” options, picking Electro Swing, mostly because I wondered what the hell it is. First up Nina Simone “feeling good” and then “Tangled Up” Caro Emerald (never heard of her.) So right off it’s still spitting out things I find I’m adoring. Looking at its playlists and still its throwing up album covers that I instantly recognise. Gaaa, I’m a sucker for girly vocals http://www.deezer.com/playlist/13057818 at this point I’m losing any sense of objectivity about this. I’m stopping writing and coming back to this in a week.

Okay a few weeks later now and yes they do have stuff outside 80’s and 90’s greatest hits. Disturbingly it consistently threw up playlists that have been recommended by random users that I found my self greatly pleased with. It’s either creepy or awesome how well it seems to be at picking things to throw my way.

I have very mixed feelings here. If you’re American you get a pretty sweet deal, at US$10 per month, however Euro users are 10 Euro’s and for those of us in the UK get charged £10. That works out to over US$15 for UK subscribers. On that issue alone I could not in good conscience say that Europeans and Brits are not getting screwed. It’s not affair and its bull poop. Get it sorted Deezer!!!

Deezer, if I chose to ignore that pricing issue, is awesome. I don’t really know why its musical suggesting abilities are so stupendously amazeballs but they are. Every time I fire it up it just endless awesome stuff. To the point it’s almost creepy how well it does it. I just don’t know where it’s coming from. I mean Deezer doesn’t really have access to anything, I think, beyond my last.fm account which I never remember to have set to scrobble.

Squeeeeee!!!! If anything the worst thing about Deezer is that it’s pretty productivity destroying. If you want the sort of put on in the background while you work. You know you’re not really listening, it’s just to break the silence, well it is terrible for that. Most because it’s so engaging and I find I can’t really not pay attention to it. I may or may not find myself singing along and dancing about in my chair. Again, productivity destroying stuff.

So, would I buy? Despite my immense irritation at the pricing disparity I have been paying for it for the last two months (after my 3 months free ran out.) So yes, I would and have been. I kinda love it, its music prediction abilities are just nuts, soooooooooooo good it is without any question my favourite music streaming service. It’s got the Pandora like but beating musical suggestion side and the pick what you want of Spotify, giving you not just the best of both but better than both. Love it!!! 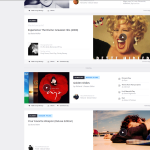