Systweak reached out to us to see if we’d review one of their products. As some of the team have used Systweak products on their mobile and desktop machines previously we agreed and chose Systweak Android Cleaner. Mark takes a closer look at whether it delivers.

My mobile of choice, dear readers, my so called “daily driver” in my now aging Nexus 5. You see I want a Nexus but I don’t something huge so aside from getting a 5X which has almost the same spec there isn’t many options. So I am for the moment tied to it. This isn’t really a problem as on paper the phone is still a great performer and can beat many of the midrangers of today. These mid rangers though feel so much more fluid and snappy that my Nexus 5 does. You see I install tons of crappy apps and they conspire to eat all of the RAM imaginable and to generally clog the phone down. It can be painfully frustrating at times. However I know that it should beat things like my Moto G 4G hands down and that what it really needs is a good, old fashioned wipe. 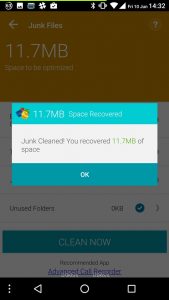 Back in the days of yore, if you’re computer was running slow, bogged down, clogged up with rubbish the easy answer was always, wipe it and use a clean install. It never failed to make the computer in question feel so much more snappy that it had been. Sadly it seems that phones now need the same thing but I’ve grown up. It’s no longer fun to wipe and then to have to reinstall every app, every setup, every configuration. I know look at doing all that in horror and decide, oh the phone isn’t really that bad. Oh its fine, once it’s up and running, I’ll maybe do it some other time.

Why am I telling you all this? Well you see this is where “Systweak Android Cleaner” comes in. it promises to fix all these things. It declares:

If you have you ever come across situations like

− Too many apps in phone

− Phone running out of memory

Then this Android optimizer is the perfect solution to fix all these issues!

My phone, it pretty much has all of those issues so it should be perfect and just what I need, if indeed it lives up to its billing. If its reviews in the Play Store are to be believed it seems popular, with just under a thousand 5 star reviews and an average score of 4.4. That’s a pretty credible score. 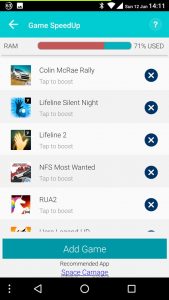 With it installed, naturally the first thing it does is ask for permission to access your files. Obviously it needs to be able to so I give it access. It decides to scan and it takes a while doing. Okay and we’re in. Hmm so we have 5 main options, phone boost, junk files, storage manager, game speed up and app manager. The app manager I get what that’ll do but game speed up? I accessed it and its listed my games and if you hit one it loads it. I think it’s killing all your other background apps as it does so but I’m not user how that’s going to speed anything as the stupid android task manager will just load them up in the background for you whether you want them or not. Or am I missing something?

App manager, it err, lists your apps and tells you what size they are, well the actual app anyway, games that are there, it doesn’t include the cached data it uses. Like when you install a game from the Play store and its 40MB then when you run it the first thing it does is tell you it needs to download 1GB of game data. That seems like a bit of a silly mistake. However it offers you the option to “archive” any of the app’s but it doesn’t say what exactly that makes it do. So I just archived Asphalt 8 and it err, made an archive file and as far as I can tell that’s it. Presumably the idea is you can then uninstall the app and at some future point restore it and that way you don’t lose your app / game data. So maybe if you like playing huge games that can’t all fit on your phone at once you can, as it were, go back on forth between them. I’m no sure that’s a great idea to hammer the storage like that but I suppose if you have an 8GB phone then this might be a lifesaver.

Game Speed Up. I have no clue what this does, it launches games and other than that I’m just guessing. I assume it does something else, perhaps killing everything else in RAM before loading it. I just don’t know and I’m not sure I noticed any difference from just loading a game normally.

Storage Manager. It tells you what sort of files are taking up what space, like photos, videos, “big files” and so on and so forth. It correctly pulled up my TWRP backup files and being big, and you know since it’s an old back up, boom it’s gone. I guess that’s sort of useful but it’s a similar functionality you would get from the normal Android storage manager. Perhaps people just don’t remember it’s there?

Junk Files. This lets you quickly delete a bunch of random bits, temp files, unused folders and interestingly one called External App Cache. Delving into it a little and it seems to be random bits, for instance there was a handful of photos I have tweeted. Sitting in my Falcon folder but why, why those ones, why not all of them? Now it only amounted to 36 MB but they just seemed to be files creating clutter rather any productive purpose.

Lastly we have the main function, the big central button. “Phone Boost” so what does that do you may ask, well it clears the RAM. Now that seems like a really good idea but the problem is that Android insistent on being “helpful” and loading every old app in the style of Windows 95. You know, loading up everything just in case you want to use an app, so it can launch faster. However when 50 apps are all loading themselves the net effect is bogs everything down. You hit the button, it comes back with the information that 589MB was released and that now only 48% of the RAM is in use. Great you may think but just you wait, no seriously, wait. Android will steadily eat that free RAM till there is none left. Sit and watch the app. In the time it’s taken me to write that last sentence the RAM usage has gone from 48% to 58%. I haven’t touched it either. Now you can set the app to auto clean every 2, 4, 6 or 8 hours. You can also tell it to ignore certain apps, the ones you want left running. Don’t get me wrong this functionality is a great idea but Android itself is going to be battling against it trying to turn every app on. So isn’t it going to end up eating more power over all killing then re-opening apps?

So have I noticed a whopping difference? In a word, no. The app is a nice idea and it could be really helpful for some, showing where your storage space is being eaten. As a bit of a power user, I already know where things go for the most part so it wasn’t so useful to me. However if you are a more typical user and you maybe only have 8GB of stargaze to begin with then the file clean up could be a real boon for you. The other big function, the freeing up RAM, that’s may seem completely sensible but it isn’t. You see Android and Google thinks they know best and they have decided that apps can auto start themselves just like windows and the “quick launch” feature years and years back. The trouble back then was they clogged up and bogged down the whole thing having a negative impact on performance. Granted that one app may launch quicker than without it already being loaded but it was a massive pain. Android therefore when you free up lots of RAM will promptly work to fill your RAM with junk. That very same junk you just killed in an attempt to speed up your phone.

I fell what a proper app manger needs is the ability to stop app’s from auto loading themselves and this does not have that. Android is actively working against everything this app does therefore the app to me doesn’t really seem to be helping a great deal. Don’t get me wrong, it’s trying to clear up RAM for you but then the OS instantly refills it.

24 hours later however……normally my N5, when you haven’t touched it for a while and you first pick it up it moves like it’s trying to swim through molasses. Give it a few minutes and it starts responding more normally but now, it’s behaving much snappier from the get go. I’m suspicious as to why, I know it can’t be the RAM. Is it that I cleared out the 36MB of junk files and folders? Could such a tiny amount of stuff make such a difference? I am sceptical, I don’t see how it could be but the phone feels much more initially responsive. I don’t believe there should be any difference and I’m going to assume there must be some component of the placebo effect however….. that usually only applies when you think something will help, I thought it wouldn’t, yet it would seem to have.

So, should you give it a try? Well normally I’d want to say no, as I don’t think it should really help in anyway other than to get rid of junk and clutter. You should be able to do that yourself manually. However…. It does seem to have sped things up, made the UI not stall after being in standby for a while. Given that the app is free I’m much more inclined to say give it a bash because its costs you nothing and it can’t hurt to give it a try can it? If you do indeed give it bash, please give us a shout here or on twitter and tell us if you feel it’s made your phone or tablet any more snappy / responsive?

Install from the Google Play Store