Given the other week the app price for DuckTales: Remastered simply fell off a cliff, some special whatever to a measly 69p. Sitting at £7.99 over on the Itunes store, that’s a massive difference and a massive saving. So naturally I had to buy it, it would have been rude not to right? Shut up, it was a bargain, what does it matter if I never play games, I had to snap it up. Come on its Ducktails!!!!

Yeah yeah you were singing along to it weren’t you, even if just in your head.

So let’s just say I’m inclined to love this game if for nothing beyond nostalgia. That also means if it’s horrible and sucks that I’m setting it up to be disappointing. The show was so good the game has a lot to live up to. So let’s see how it does shall we. 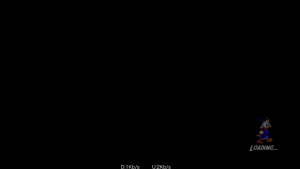 On hitting download it’s a hefty 588MB so if you aren’t on an unlimited mobile data connection you’ll maybe want to use the office Wi-Fi, err I mean wait till you get home and use your home Wi-Fi of course. 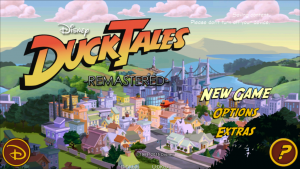 So the game itself, after some play is alright. It reminds me a bit of Mario back in the day, your standard platformer with jumping and collection coins, in this case, golden diamonds. You start off by trying to rescue Huey, Dewy and Louie. It’s nice. But, the but you knew was coming, I’m really not loving the onscreen buttons. Not that they are wrong in anyway of course, they just don’t have any tactile feedback. I don’t know where they are so I find I’m always looking down at the keys before I press anything. It’s not fluid at all. Now I’m not sure if that it’s a negative about the game, or simply a negative about gaming on a touchscreen. Hmm I feel like I need one of those game controller / phone holder thingys. I’m betting with one of them it would be much more smooth. Of course it could be that it’s me, I suck at platformers, always have. 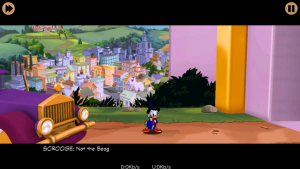 The game itself is lovely, it’s all 2D but it’s beautiful looking and I love, LOVE that all the voices are done by the real actors form the show. If it’s not them they sound identical as best my ears and memory recalls. It does feel like you’re in a little episode of the show which I guess is the point. However with those on screen controls it feels like a really slow episode. I’m not sure I can blame the game for having onscreen controls, still I feel you kinda need that real buttoned controller to make the best of this. 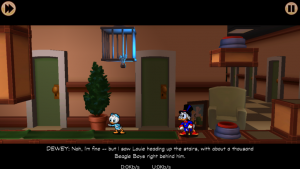 The thing is it’s really was nice to play for a little bit, it was a great little nostalgia ride but after a few minutes I just got ever more frustrated by those onscreen buttons. I know its not the games fault, what else could they do? Though I suspect if you’re a hard core mobile gamer, as hard core as such a thing can be anyway, then you won’t face that issue. I’d say then it’s a lovely wee platformer, it looks lovely, its sounds are great (when you tell it to use the 8 bit track) and because it’s all 2D rendering it plays silky smooth even on my one 1st gen Moto G. 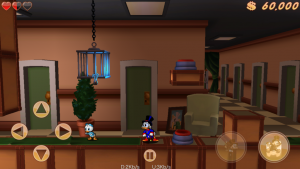 In terms of value though, I see its price has since gone back up, to £6 now and I’m afraid I go eek! at that. Sure it’s a nice little game but you are paying big time for Disney licensing, Disney characters, Disney voice artists, and the Disney childhood nostalgia ride. For my 69p I got a bargain but at £6 you had better a great big fan of Ducktails, and I would also suggest have a hardware controller too. It’s a nice game, a quality little game but I’m not sure it’s worth £6, not to me anyway. 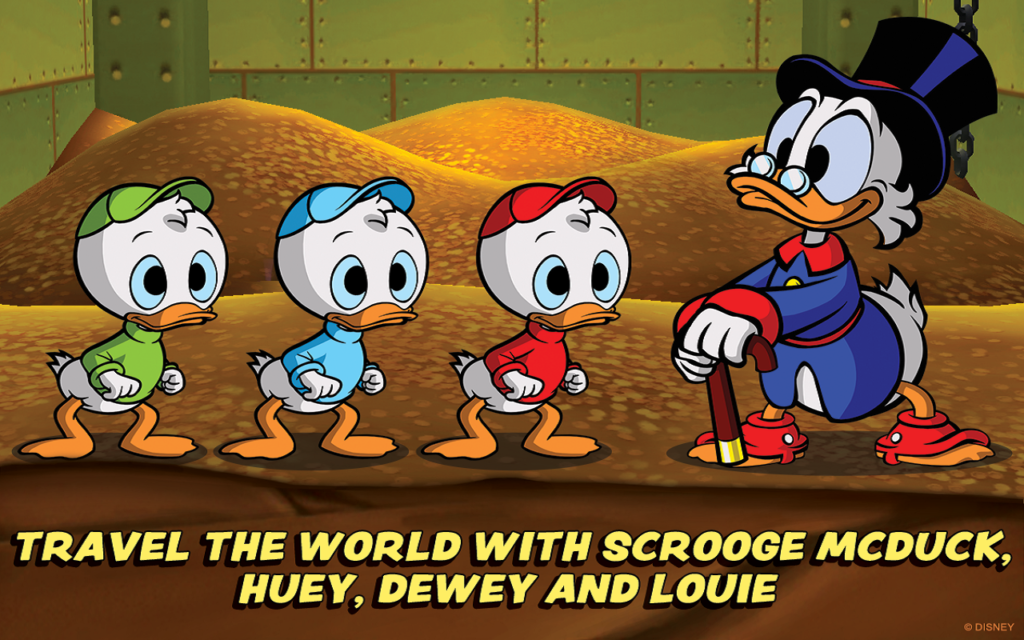