The aLLreLi X100 Gaming Mouse Review, we don’t so often get mice in but we (okay, I) saw the lights and went ooooh pretty, thus in it came.  How did it get on? 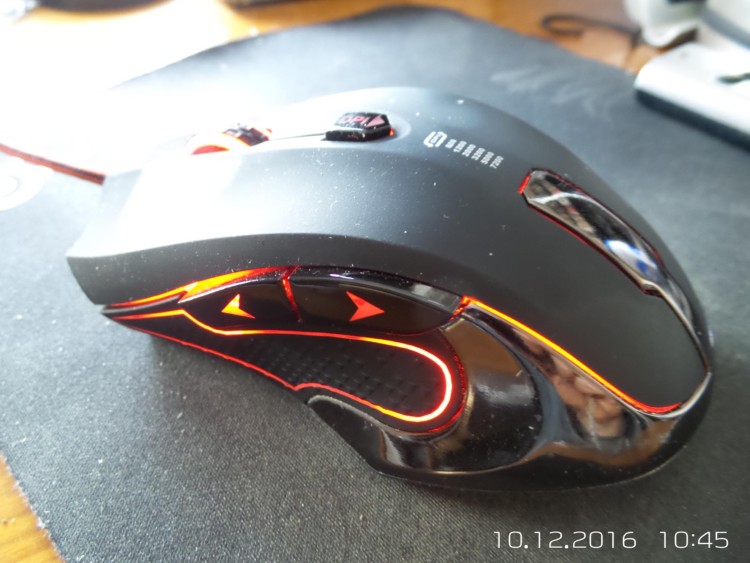 Thanks to aLLreLi for the sample.

Hmmm the box isn’t anything too fancy, curious that the front pic doesn’t show the cable sticking out, why do mice product images often do that?  Anyway opening it up and we have the mouse in bubble wrap, a little CD with drivers and some bits of plastic.  Errr, oh I get what they are, they are replacement feet for the mouse.  Oh that’s kinda a nice additions I think, though I’d bet most normal folk will have lost them long before they need them.  Nice though you get them and it’s not their fault if you lose them.

Plugging it in I notice that the cable is a pretty sturdy thing.  The cable has still got the kinks where it was folded in the box.  Hmmm I could see if that cable bumps into things it would impede movement which is why I normally go with wireless.  Though it’s not the first time mid instance where the batteries have died.  Which may or may not be how I broke my old mouse trying to remove batteries one-handed while controlling movements as best I could with the WASD keys.  (Note, bashing mouse into desk to knock out batteries may reduce the lifespan of said mouse considerably.)  Once it’s plugged in the thing lights up and whoa, the pointer flies over the screen.  Ahh I had the windows mouse sensitivity settings up at full.  Turning those right down we now get some more realistic movement.   Ahhh, and hitting the DPI button changes the movement rate and the colour. Cool.  I sense that may be getting some customising so the colour I like has the movement speed I like.

Having been using the thing for a few weeks now, I’ve really gotten used to it.  While I may like it more if it was a bit bigger but the curve fits my hand nicely.  The front and back buttons are perfectly placed for my thumb and mostly my mouse use is as it should be.  I do it without thinking.  Now I’m not super wild about the location of the DPI button because a few times I’ve pressed it by accident.  Not that it happened often or was a big issue but it happened.  Also something of note is that in the morning first thing, ooooh that metal bit is cold in your hand.  It warms quickly but oooh it’s nippy on a winter’s morn.  The wheel I rather liked, with its ribbed for err, your pleasure, surface.  It seems I have greasy fingers, it always had nice grip and traction, with its indented rotation.  I’m fussy about mice shapes and it was nice.  Not perfect, a bit bigger and a bit sloped for right handed use would have been nicer but I was never unhappy using it.

The DPI settings and the windows mouse sensitivity controls should be used in unison to customise what is best for you.  For me I played until the blue light option was as sensitive as I liked.  So sue me, my most pressing concern was picking the most pretty colour option 🙂 actually I quite liked them all.  Anyway, yes the controls, movement was always precise and accurate.  Clicks were easily noticeable.  Not to firm, not too soft with a nice tactile click.  The wheel had a tactile scroll too.  Really everything was what it ought to be.  No issues.

So yeah, the mouse comes with not just a driver but its own little control software.  While it is in no way required for the mouse to work, if you want to fine tune things you do.  For example you can remap all the buttons if you want.  Change all the DPI settings, change the light settings. Change it from breathing to constant, whatever works for you best.  You can set up your own macros too if you want and even change the report data rate, god know why you’d want to but you can.  So yeah, mostly I wanted the option to play around with the lighting controls.  I may not exactly be the world’s most hard-core gamer.  Hey, my nephew though the lighting up was super cool.  The only issue I have is this, why can’t I set the colour to random or colour cycling?  I’m very much hoping aLLreLi make an update that’ll do that for you but given its tied to the DPI settings I doubt it’ll happen.  However the software controls are all easy, obvious and work nicely.  Can’t fault anything.

So the mouse looks nice.  I like the lighting effects, so much so I feel like I need a matching keyboard now.  The mouse with it’s all matte black plastic leeks great.  Though it does mean the points where my greasy fingers sit on the mouse buttons stand out.  I cleaned a few times then realised I was a losing battle.  Now the only thing that visually I don’t get is the cable.  The black and red.  To me that meant I feel like I should have the mouse light up red but I like blue better.  Thus I feel like the cable should have been just all black.  It’s the same with the box and the control software, it’s all red highlighted.  Also what’s odd is the box says it has 4 selectable colours but its 6.  Though I guess the blue and the turquoise are pretty similar and the red and purple are a bit too.

So I know gamers are supper fussy about mice, Halo players need those headshots, I get that.  Okay so yeh, the mouse performed very well.  I don’t think it made me a better gamer, or by which I mean a less bad gamer, it all worked.  Certainly over my wireless mouse there was never any of those little lags and jumps when the thing has gone to sleep or when the phone near it hammering the Wi-Fi and cause the mouse the stutter.  So yes it was better, wired always does work better.  While I can’t say that this mouse is going to turn you into a gaming superstar, I’m pretty sure if you aren’t and you have this mouse, you can’t really blame the mouse.

Looking on Amazon I see it has £24 marked down from £80.  Yeah I don’t think this was ever sold at £80 but for £24 it seems a pretty solid buy.  You get a mouse that fits my hand nicely, buttons all click nicely, I like the wheel scrolling and you get the controls offered by the DPI playing with and the colour options that come with it.  £24 seems like a pretty good bargain to me.

A mouse is a mouse, so while this is a “gaming” mouse, to me that mostly means it looks aggressive and has fancy lights.  Sure you can do all the DPI and change the report rates, which can go as a high as a thousand times a second.  Yeah my hand doesn’t quite move fast enough to be requiring polling its position a thousand times a second but hey.  If you are some hard-core gamer type who wants that level of controls then the X100 gives it to you.  Me, I mostly like the pretty lights.

So would I / should you buys one.  Hmm I’m not sure, I still love wireless but I can’t deny there are benefits to wired and I do like the lights.  I also really like the controls for them, I ended up setting the DPI I liked and making all the colours set to that DPI.  So the DPI button just became a light control.  Yey for pretty lights!!!  I suspect my former mouse may be due for retirement.  You?  Well you can get cheaper mice, you can get mice without all the DPI settings and stuff, for your office computer, this may be overkill.  The lights especially but…… for its gaming talents and customisability it’s very cheap.  Compared to more mainstream brands that let you control the data polling rate the X100 seems a bit of a steal to me.  A good solid, mouse with great software control options for all your gaming and lighting needs.

Ahh and here are some discount codes for you all. 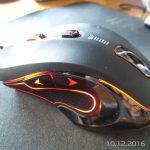