Dom bought a Yogabook back when they were first released and he left a great review for it too, so when I was offered the opportunity to test out the Windows variant of the Yogabook I wanted to see what was so good about it.The packaging was really nice and alongside the usual power brick, micro USB cable, you do get a couple extras which separate the Yogabook from its competitors including the stylus pen hybrid, notepad, extra pen nibs and surprisingly a SIM card ejector tool because there is a version of this available with an LTE modem inside which is handy for those who need the mobile connection. 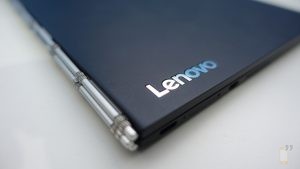 Setting up the laptop is identical to any other Windows 10 laptop or computer. But the oddness of having a “digital keyboard” was a strange feeling and I did make a lot of typos when logging into accounts and getting used to a capacitive keyboard like this was very weird.

There was a sound when you are typing which did get a bit annoying so I ended up turning it off but even with that off there is still a small thing going off which does get on my nerves and rather than it being a software thing, it’s something on the hardware, most probably the hinge.
The touch surface can only be activated by pressing the pen icon on the top of the keyboard which is a bit annoying as you should be able to activate it using the pen and the pen can’t be used with the keyboard.

When the pen nib is attached at the top you will realise that if you try using it on the screen the touchscreen will work however you will see the pen marks on the screen as I discovered. The removal and inserting the various nibs was easy using the lid of the pen so make sure you don’t lose or forget this if you want to change nibs on the go. But there isn’t convenient way of storing these nibs if you like changing on the go.When using the caps lock button I always forgot I had to turn it off again like on a conventional windows computer and somehow, I always forgot this as there is no LED light to inform you whether it is switched on. I feel like muscle memory on touch screen devices has led me to also feel this as there is no tactile feedback 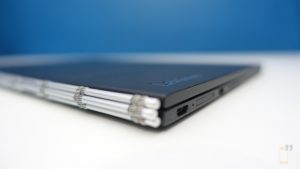 The screen did feel a little on the small size when using Windows as I have been used to using a 19-inch display on Windows and I felt like the bezels could’ve been made tiny and there is a large amount of wasted space on this display. However, the display was fairly colour accurate if a little on the green side. The brightness of the display was great and I could see it outdoors well if I wasn’t under direct sunlight or if the sky wasn’t overly bright.

I watched a couple hours’ worth of movies and YouTube videos and whilst the speakers get loud enough for a private or small group viewing session, they are tinny and lack bass. I liked watching content with the volume about 50% as they were quite balanced and the audio sounded natural. 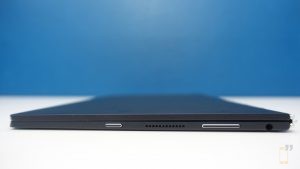 The build quality was good overall with minuscule amounts of flex and even when placed in a bag without a sleeve I didn’t find any damage, there was a scratch from before as this was a review unit. The hinge doesn’t rattle whatsoever which is good as this would annoy me lots. The LED backlighting had an odd pattern which made it look like the keyboard was dirty.

The palm rejection was terrible and I had the page go down or the line go down in Microsoft Word as my palm would hit the page down or the down arrow and I would lose my space and this is frustrating and a simple software update may be able to fix this. The trackpad also stopped working from time to time which was frustrating and it required waiting for it to work or restarting the entire 2 in 1.

The camera, or cameras I should say. Surprisingly this has 2 cameras, one of which is in a pretty conventional location above the screen whereas the other camera is located at the top right of the keyboard next to the pen button and you may think this is an odd location to place it however when you flip the keyboard all the way around to the back it becomes the rear facing camera. the quality difference is quite similar with the “rear” facing one is 4x the resolution of the front one. But I guess who takes photos with their tablet as you don’t want to be that obnoxious person blocking everybody’s view with your tablet.  I will include some shots to show the quality of both cameras

Battery life was a mixed bag and I didn’t get the claimed 13 hours ever, I was getting around 8 hours on a good day and even at idle, the battery drained fairly quickly. When trying to charge this on a 2.4A charger and trying to use it, I found that I was using up more power than was delivered by the micro USB port even with the 12V 2A power brick included inside the box. 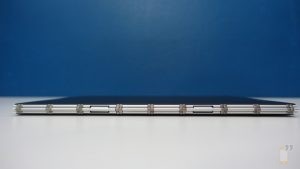 Performance is definitely not a strong point of this device as there is lag even when typing on Microsoft Word even if it’s a few milliseconds and the Geekbench scores were 980 for the single core and 2361 for the multi-core and this is half of the performance found on the Samsung Galaxy S7 which is a year old and maybe a smartphone processor would’ve been better.

I/O was non-existent almost as you only have the micro USB charging port and the micro HDMI port which you will have to buy a separate adapter to use it with anything. The simple addition of 2 USB C ports would eliminate these issues with fast charging alongside the versatility of the format due to the higher data throughput.

Overall, it’s a neat little machine and I have enjoyed my time using it but I would struggle to use it full time and commend Dom for doing so.