We all know the new releases that have come from this year’s MWC conference. One of the most awaited launch events was held yesterday morning when the Chinese mobile ‘giant’ Xiaomi took to the stage at MWC to launch their much-waited flagship, the Xiaomi Mi5. The funny thing with Xiaomi is that everyone seems to be so hyped about their phones, even when they don’t even sell their devices outside Asia/India or Brazil.

In previous years, Xiaomi’s design has been somewhat bland and maybe boring, but this time, they have really put some brains behind the design. The predominant word for this year on design for Xiaomi is ‘curves, and lots of them’.

Xiaomi Mi5 will come in three different configurations but they all will be running the new Qualcomm Snapdragon 820. The biggest differences in hardware are in storage space and RAM, also, the most expensive model will also use curved ceramic back whereas the other two will have a glass back.

Here are the specs for the different configurations:

5,15 inch screen, resolution 1920 x 1080 pixels
Qualcomm Snapdragon 820
3GB of RAM / 4GB of RAM (Pro version)
32/64GB of storage or 128GB of UFS-2 storage (Pro model)
3000mAh battery
16MPix Sony IMX298 sensor on the back with 4 axis OIS
4Mpix camera on the front
Fingerprint scanner on the front
NFC (first time ever on a Xiaomi phone)
Android 6.0 with MIUI 7 on top
Those are very, very nice specs and puts Xiaomi again on the map battling against behemoths like Samsung and LG.

Beside the specs, the most interesting part is the design of the phones. As stated the two versions will come with curved 3D glass and the Pro model will feature a curved ceramic back. Xiaomi has used the same kind of curved back design with their Mi Note phablet but this time, they have made the design even smoother for better feel in the hand

Xiaomi went all-in on the design and how the manufacturing is done, and I have to say the pictures of the phone look stunning. Also the hands-on impressions from MWC seem to gloat about the same fact that the phone feels great in-hand.

This is also the first Xiaomi phone that has a built-in NFC chip. Xiaomi told the press they were working directly with NXP on the NFC chip front. NXP is one the most known companies involved in NFC manufacturing and has other clients like Apple and Samsung on their portfolio. So the Mi5 is future proof and ready for the upcoming mobile payment technologies. 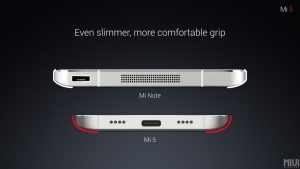 On the connection front the Mi5 features a new CAT12 modem from Qualcomm. The phone also supports VoLTE (Voice Over LTE) technology.

The killer advantages of VoLTE (Voice over LTE) technology for 4G users:

faster call connection, high-definition and better voice and video call quality which provides a more natural sound while resulting in lower dropped-call rates, atleast when VoLTE actually is rolled out in all the countries. It will also have a maximum download speed of a whopping 600Mbps, if you manage to find a network that supports that kind of speed.

The phone will also support Qualcomm’s new Quick Charge 3.0 for that last minute charge when you are in a hurry. Also the much needed fingerprint scanner is located on the front and takes its design clearly from Samsung.

Marshmallow with MIUI 7 on top 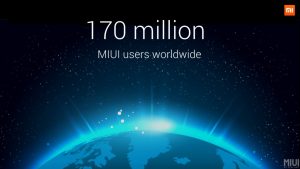 Xiaomi’s software UI is called MIUI, which has evolved to version 7 already. MIUI 7 is based on Android 6.0 (not sure if this is 6.0.1 based or not). In total Xiaomi says it has already crossed the 170million MIUI user mark. One thing that is special in MIUI is that it gets weekly updates from the company (atleast the Chinese variant) and they have their own very active community for MIUI where users can report bugs and suggest feature requests. Xiaomi says that when a user suggests a feature for MIUI and the company thinks it might be a good idea to do, the feature might be already available in the next weekly update.

MIUI takes a lot of design cues from Apple’s iOS and as typical with Chinese manufacturers UIs, it also doesn’t feature the much talked about App drawer. Every app’s icon gets put to the home screens of the users phone just like on iOS (and the new LG G5). Xiaomi also boasts the fact that when Google releases a new monthly security update, MIUI users are the first one to get it because of the weekly update schedule. Although this only applies to the Chinese variants, so if you are using the unofficial EU ROM, it will take a little bit longer.

It was rumored that as the unveiling of the Mi5 happened in MWC, it would also mean that Xiaomi is ready to bring its devices to the western markets. Sadly this isn’t the case, atleast not yet. The phone will go on sale on China the 1st of March and India, along with other global markets will follow ‘soon’. Xiaomi has always excelled in bringing the devices on sale very fast and this time is no exception. Under a week after the unveiling, the phone is already on sale.

Xiaomi has always produced nice products but the magic happens when you look at the price tag. Just over $260 for the regular Mi5 and $350 for the Mi5 Pro with extra RAM, storage, and a ceramic back. That is a price that pretty much no-one can beat, not even OnePlus.

There are of course ways to get the device in Europe but that requires a trip to sites like aliexpress or Gearbest and you won’t find the device with those low prices – the prices seem to range from $440 to $559. As I am such a phonohobo I took the plunge and ordered the Mi5 Pro this morning from a trusted seller at Aliexpress. So keep an eye on this page for the full review next month!