Home / News / The Ubuntu Phone Launches With A Stutter

The Ubuntu Phone Launches With A Stutter

After months of rumours and leaks as well as actual announcements, February 11th 2015, at 8am (GMT) was the time when a limited number of Ubuntu Phone devices from Spanish smartphone producer BQ, became available. That’s where things stuttered…

Whilst BQ’s Aquaris E4.5 isn’t the hottest smartphone out there, the fact that the long-awaited Ubuntu OS was to be delivered upon this somewhat modest hardware had the tech community in a twitter.

Ubuntu OS brings with it not only an apparent seamless transition from mobile to desktop OS, but also, more intriguingly, it’s Scopes deployment which focuses on delivering HTML5 provisioned information directly to the home-screen. There are many reasons why this is important. In the developer community, the ability to cut out the middle man (Google Play Store, App Store, etc) and deliver a closer, more integrated relationship with the consumer via HTML5-ready webapps, is perhaps the most exciting.

For this reason, BQ’s release of the device via a “flash sale” with a limited number of devices available, was jumped upon. 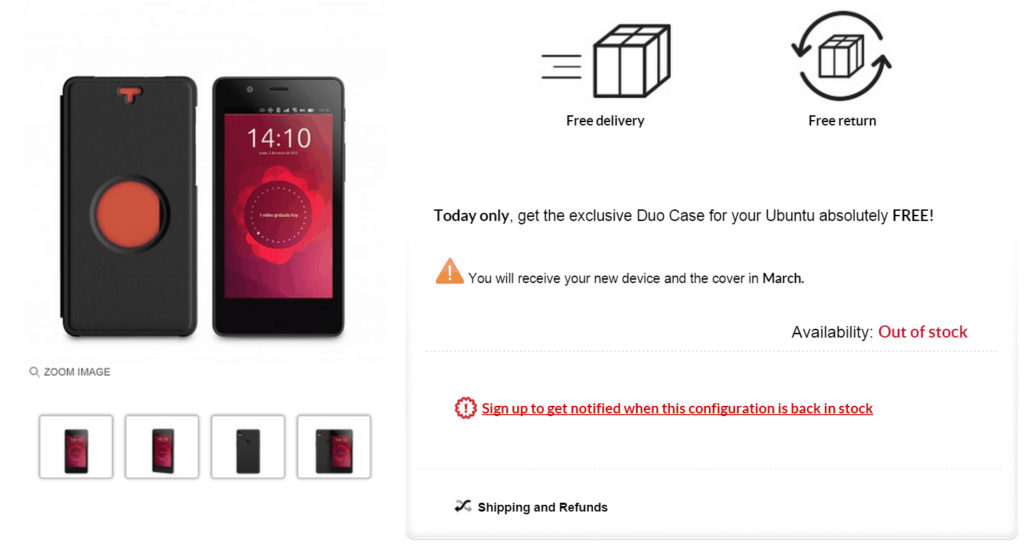 From the beginning BQ’s website had issues. Reports across Twitter indicated that the Buy button was not active, that the basket didn’t display items that had been carted, that payment screens returned errors, and many more, up to 90 minutes after launch.

This continued until approximately 9:30 (GMT) when the ability to arrive at payment pages seemed to be fixed, only to be told that there was Zero stock.

Since then, Alan Pope, Engineering Manager at Canonical the company responsible for producing Ubuntu OS, has re-posted a BQ post on Google+ detailing the issues and setting out that there will be an additional flash sale to compensate today at 3pm CET (2pm GMT).

Either way, with would-be consumers of new/concept devices being burned recently on the OnePlus One invites fiasco, and latterly with this morning’s issues, we don’t expect too many people to hang around until for that flash sale.

We’re still very much looking forward to Ubuntu OS on a mobile device; after this morning’s antics, it remains to be seen if BQ are best placed to deliver it.

Are you be interested in the Ubuntu version of the BQ Aquaris E4.5? Would you prefer to wait for Meizu’s offering, perhaps giving increased build quality and performance? Let us know in the comments section.