In the past few weeks more and more images started leaking out of the new 2016 Nexus phones, which is expected to be designed by HTC. Different than last year, the 2 Nexus devices will be made by the same manufacturer, while Google worked together with two OEMs for their devices in 2015. This isn’t the first time we heard about such a rumor, but it’s now essentially confirmed.

A new FCC listing is mentioning two new HTC smartphones that go by the following code names at FCC: G-2PW2100 and G-2PW4100. The listing is also pointing to Google’s website for the manuals of the devices. Besides that, both model numbers start with the typical “G” in Google’s own font, making it pretty clear that these are indeed Nexus phones.

If you’re really looking for hardware specifications, FCC isn’t the go to place. What we do know is that the phones will be supporting the following LTE bands (US): 2/4/5/7/12/13/17/25/26/30/41, along with Wi-Fi 802.11 a/b/g/n/ac (Dual-band), Bluetooth LE, and NFC. Previous rumors suggested that the Marlin will be the larger handset with a 5.5” QHD display, Snapdragon 820, 4GB of RAM, and a 13MP/8MP camera combination. The other phone which is called “Sailfish” in the rumors is suggested to be its smaller brother with just a 5.2” Full-HD display, other specification will be exactly the same if we may believe the rumors. As of now it seems that these phones will have much closer specifications compared to the N6P and N5X last year. 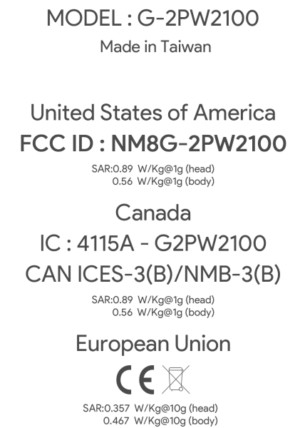 Expected launch of the Nexus devices

Do you like how it’s looking in Nexus rumor land in 2016? Do let us know in the comments down below!