Those of you out there that like your technology slightly quirky and obscure will be very happy to hear the news out of Samsung recently. The Galaxy Note Edge is due to hit UK shores after all with the device on shelves November 28th, just in time for that Holiday season. Are you looking forward to this device landing? 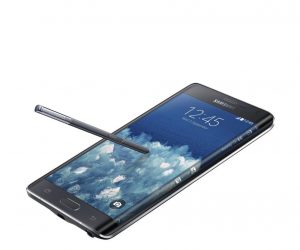 Samsung’s latest “concept” smartphone ironically takes much of its design aesthetic from it’s sibling the Note 4, Samsung’s first and iconic phablet. So what would make a consumer choose the Edge over the more mature Note line up?

The Galaxy Note Edge will sport some impressive specifications of its own. A 5.6″ Super AMOLED capacitive screen with a resolution of 1600 x 2560 which provides a slightly sharper resolution than that of the Note 4 at 524 ppi is where you’ll spend most of your time. Powering the Note Edge will be a Snapdragon 805 CPU clocked at 2.7Ghz, an Adreno 420 GPU and 3GB RAM.

The main draw here however is the secondary screen to the right of the device (lefties, don’t worry, Samsung has you covered. You can flip the device entirely to use in your right hand). The entire right-side of the device, where normally you find bezel, is instead a curved fleck of screen which can be independently operating, which should open up some nice, if niche, applications uses. The Note Edge also sports the now legendary S-Pen and comes bundled with a similar array of applications to that which Samsung bundle with the Note 4.

It remains to be seen if the market for the Note Edge will become as fevered and cult as that which now follows every new Note release, however it’s safe to say that there is enough here, aside from the curved screen, to lure power users.

Pre-orders will be available starting November 14th from the Samsung Online Store, and Carphone Warehouse.

Let us know whether this excites you, or is this one step too far from Samsung currently?