Another day, another way to break more records. Pebble haven’t been short of adding more and more things to their CV of accomplishments over the past year or so, the first being breaking the Kickstarter record of reaching their pledge goal in the least amount of time.

Today, the company announces three new products to add to their Pebble line, with new an all-new product category made for runners and, weirdly enough, hackers.

Pebble have taken a slightly different strategy from their previous devices, with fitness being at the forefront of their marketing. The company believes that fitness is a market with untapped potential, and is indeed the future of technology and the way it is going. While not everyone is an avid runner or into their fitness, it’s a great feature to behold when you can keep track of your steps and how many calories you have burned.

Adding to the whole ‘fitness factor’ – and for a more streamlined approach to selling this product – Pebble have also launched a ‘health’ app which is built into the watch and ready to be used at launch later this year, which is a fresher take on Apple’s Health application; with graphs and an all-new adaptive goals feature.

What adaptive goals does, in a nutshell, is adapt to your activity and presents you weekly or daily goals to aim for. While this may not be for everyone, it’s certainly a warranted feature to be implemented to keep the fitness ball rolling.

Moving on from the fitness types, both new Pebble watches have a tweaked design, with the more premium Pebble Time 2 having an aluminium frame with 3 colours in tow (Black, Gold and Silver).

Both new Pebble watches sees the return of the e-ink display, with the Time 2 having a coloured variation of the display.

Cross-Platform support for both iOS and Android makes its return, as well as the popular multi-day battery life that Pebble have thrived at since its initial incarnation.

In usual Pebble fashion – they have made it their mission to break more records on Kickstarter – as both the Time 2 and Pebble 2 watches are currently on the aforementioned website with a $1 million pledge target. Right now, as of typing this, it’s already halfway to its goal currently sitting at $500k. If you want to take advantage of the early bird offers, be quick and check them out here

Update: It has now reached its $1 million pledge goal. Pebble to the Core 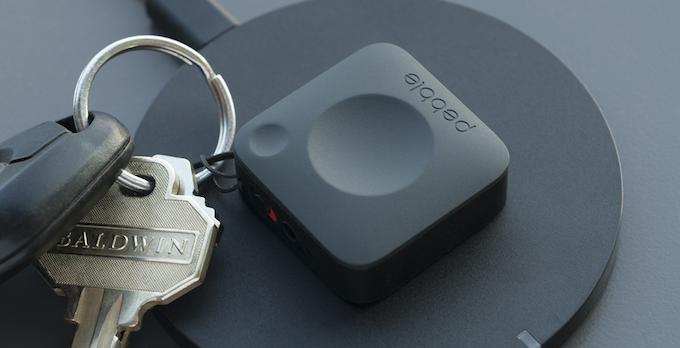 The Pebble Core was also announced today, which takes you back to the old iPod Shuffle days of strapping a small media device to your shirt, going for a run and listening to music. The Core, of course, goes for a more modernized approach to the Apple idea of being portable with runners in mind. The Core has a 3G module inside with an advanced fitness tracker built-in, meaning you can leave your phone at home and just use this as your sole fitness tracker with nothing weighing you down.

It’s a little bulkier than Apple’s iPod shuffle, but this is to be expected with the 3G module and all the internals they had to fit in there. The design is unassuming, which is what you want when you’re going out for a run; you want nothing in your way when you’re meeting those adaptive goals your Time 2 has set you. Another thing that is pretty great of Pebble to do is have Spotify built-in as standard, so it goes hand-in-hand with the 3G module. It’s also worth noting that Pebble Core works with all your favourite fitness apps, which are listed below:

If running doesn’t take your fancy, the Core also acts as an actionable button configuration for an ultimate slice of hacker’s delight. [pullquote align=”right” cite=”” link=”” color=”” class=”” size=””]think of it as a Staples’ ‘easy’ button but you can hack it and it runs Android.[/pullquote]

If you have no idea what I’m talking about, the device works as such: You have two re-programmable buttons on the little device. Plug it into your PC, change the settings or hack yourself a new one – like for example ‘Call an Uber’ – and the button is re-programmed to that action. Handy for those moments when you’re stuck in the middle of nowhere. 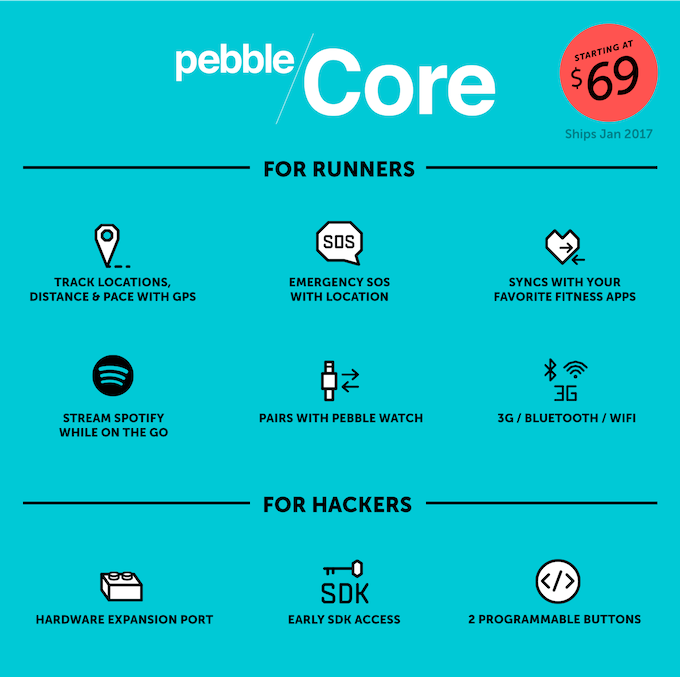 How to Get One

You can pledge on their Kickstarter page here – but be quick, as most of the early bird offers are close to running out.

Did you order any of the new Pebble devices today? Let us know in the comments.