Today is the day the OnePlus 2 is announced. For weeks specs and had been leaked as well as some details being officially released.

Despite not having removable battery it does have a removable backplate to allow to snap on different backs. Ranging from Sandstone black to Kevlar to Bamboo, Rosewood and Black Apricot. As far as pricing goes it’s starting at £239 for the 16GB storage option and £289 for 64GB option, with a release date of 11 August for the US, Europe and India. 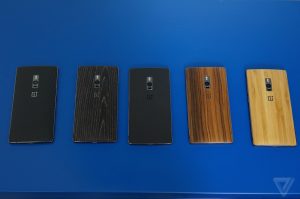 All the changeable black plates. (Picture from The Verge)

The OnePlus 2 is looking like an affordable phone compared the main flagship devices as well as just a general good upgrade over the previous model.

Let us know in the comments if you’re looking forward to this device or if the invite system will put you off getting one?