You thought Nokia was a thing of the past didn’t you? Go on, admit it. You thought that with Microsoft’s acquisition of its mobile arm (Devices and Services business to be precise), Nokia would fade gently into the background. Well, they didn’t get that memo. They’ve announced a new device; an Android powered tablet dubbed the N1.

The Nokia N1 was announced today and is Nokia’s first device release since the Microsoft acquisition. The N1 sports a number of eye-catching features, not least it’s lovely curve-edged design, and it’s Intel 64-bit Atom chip.

The Nokia N1 will also be one of the first mobile devices to sport a reversible Type-C USB connector. The standard was ratified earlier this year and is set to feature on many new devices. The Type-C connector is much-anticipated due to its reversible nature, but also due to the other benefits of the format. Type-C offers an improved power distribution method meaning that many new devices will be able to be charged by this device alone, and more quickly. 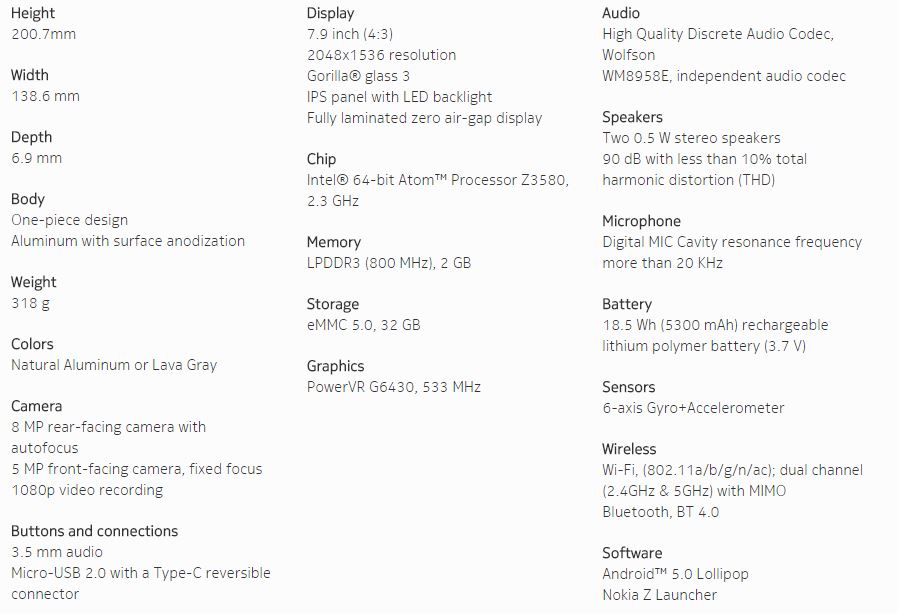 Nokia is also hoping to cash in on the wave of euphoria surrounding Google’s Android Lollipop release. Google’s latest operating system features on the N1 but is underpinning their own custom Z Launcher which sits atop it. The Z Launcher, launched earlier this year by a Nokia development team and available as a beta on the Play Store, aims to bring the user the information, applications and contacts that are required based on a gesture input. The launcher learns the applications and information that is used at particular times of the day and will offer this up to the user pre-actively.

It remains to be seen how well Android 5.0/Lollipop handles a skin atop it and how the experience will feel running on an Atom chip, but we’re keen to see Nokia, a company who always prides itself on good design and brilliant build quality, release more devices in the future.