Over in Barcelona, MWC was in full swing today at 1pm GMT when Juno Cho (President & CEO) of LG Mobile stepped onto the stage to officially announce the LG G5 and its Friends.

The much leaked device was all but announced in the lead up to MWC, but Cho got the official launch underway at MWC by referencing the leaks and starting along the path of confirming those which were true.

First to be announced was the LG G5 itself, dubbed an “adventurous theme park in your pocket” by the designers. 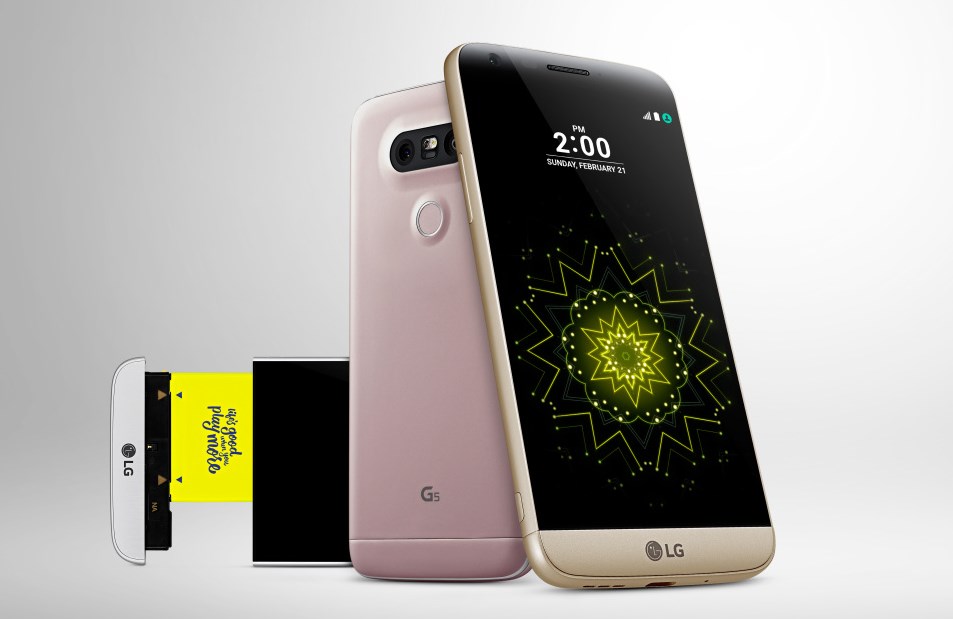 The first feature demonstrated whilst Frank Lee (Director of Marketing Communications at LG USA) is that much leaked modular battery. Let’s not mince words – it’s a removable battery, but from the bottom not the back. However it does allow for expansion. More on that later. Whether you’re a fan of the overall device or not most will be happy with the concept of being able to purchase spare batteries.

Design wise, the LG G5 is a full metal uni-body following the standard trend in the industry currently. LG opt to go with a Quad HD (2560 x 1440 / 554ppi) 5.2 inch IPS display with an interesting always on feature to allow glance notifications which illuminate only one-third of the screen and take up less than 1% per hour of battery life.

The guts of the LG G5 are made up of a Snaprdragon 820 processor, 4GB of RAM with 32GB of storage (expandable to 2TB with microSD), 16MP rear camera, 8MP front facing camera, and Android 6.0 Marshmallow. Powering these internals will be a slightly surprising 2800 mAh battery.

It all looks decidedly 2016 on the specs front but many are already slamming LG for not including adopted SD card storage within its package. Furthermore, those of us who have become used to utilising rear facing volume controls will be disappointed. These make way for a fingerprint sensor on the rear as well as a larger camera bump, whilst the power button does remain back-faced.

The LG G5 will be available in Silver, Titan, Gold and Pink colour variants. No announcement on pricing or availability as yet. 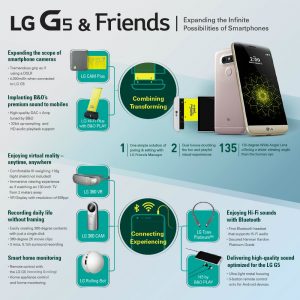 LG didn’t only announce a phone today at MWC. They also announced LG Friends – an eco-system of companion products to interact with the Lg G5 in many scenarios. Be sure to watch the video above for some cool footage of some of the more interesting devices. The LG Friends launch consisted of: 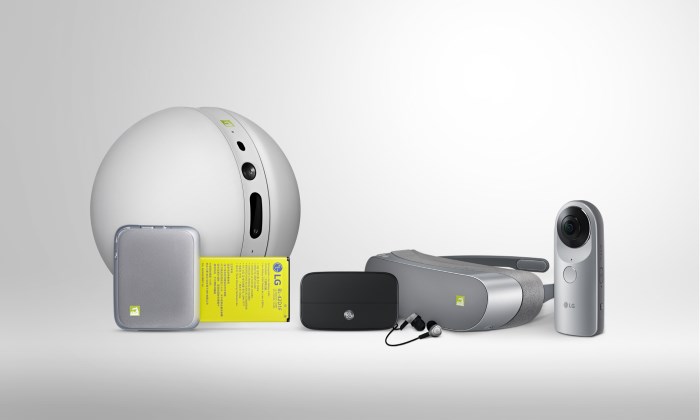 We expect many more “Friends” to be added to the LG line up depending on how well these products sell. The key many well be simplicity and LG thinks they have that covered with their “No settings, 3 steps” LG Friends Manager.

Again, no pricing or availability although we do know that the LG G5 will be coming to Vodafone in the UK shortly.