HTC seems to be rolling out Android 6.0 to the HTC Desire 820

If you’re part of the crowd who are extremely enthusiastic about Android, you might know the concern about OEM updates. The only “manufacturer” in the Android market which seems to be able to deliver its update on time is Google, with their Nexus phones. If you’re buying a phone from other companies than Google, even flagship phones, it could take months if not a year for mid-range phones to get the latest version of Android. 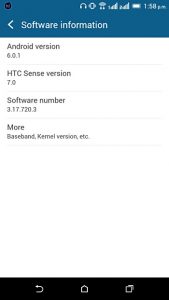 If that isn’t bad enough, some companies don’t even seem to be looking after their phones after the release, like Samsung with their low-end devices. With that said you might be surprised to know that HTC is now updating the HTC Desire 820, released in late 2014, to Android Marshmallow (6.0.1) according to a tip sent to GSM Arena:

While it’s currently unknown which model variants of the Desire 820 are receiving the OTA update, those who get the update will receive Android 6.0 with Sense 7.0 on top of it. As always new versions of Android bring new features, and with Android 6.0 there are a few features that are pretty interesting, such as Now On Tap, Doze Mode, and the granular App Permissions.

Do you like to hear that HTC seems to be caring about their customers? Do you actually expect updates if you buy mid-range devices? Do let us know in the comment section.